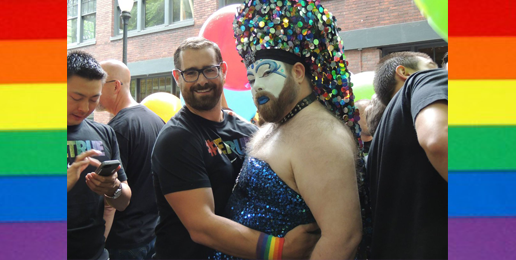 Before you watch the video below, get yourself a bucket into which you can spit those nails.

This video was taken by unhinged, self-righteous, virtue-signaling, illogical, morally vacuous, anti-Catholic, homosexual activist Pennsylvania State Representative Brian Sims (D-Philadelphia) while for over eight minutes, he harasses an elderly woman who is praying the rosary in front of a Planned Parenthood abattoir, repeatedly calling her actions shameful, disgusting, and grotesque.

He begins by hurling the common but ignorant challenge so many feticidal maniacs hurl at those who believe all humans are created in the image and likeness of God: In rage, he demands to know how many babies she has fed and clothed today. If anyone can get him off that high horse he’s riding and get him to take some valium, they should ask him if he thinks opposition to infanticide is a position that can be rationally and morally held only if one is committed to adopting, feeding, and clothing every baby whose life is spared.

He repeatedly accuses her of telling women what they can do with their bodies, which, unless he’s dimwitted, he knows is a lie. No defender of the right of humans in the womb not to be exterminated are telling women what they should do with their own bodies. They’re trying to tell pregnant mothers what they should not do to the bodies of their living children. Of course, Sims knows that, but lying liars lie.

Sims castigates her multiple times for the sin of being white, by virtue of which unchosen, morally neutral condition she has a lot—according to Sims—to repent of, including of trying to stop mothers from having their human offspring exterminated. While castigating her, he—a big, burly, buffed-up hulk of a man—makes sure to virtue-signal that he too is white and, therefore, has some reparations to make to—well, everyone, I guess. Ironically, while confronting her in front of an organization that targets the babies of women of color, Sims shouts that she is racist.

He rails on about the praying woman’s purported judgmentalism, condemning her for allegedly “shaming” women,  even as he spews his unholy judgment like virus-infected spittle on her, recording her in order to publicly shame her.

He repeatedly charges her with immorality, which is rich from a man who endorses human slaughter, voluntarily places his homoeroticism at the center of his identity, and celebrates cross-dressing.

Clearly, his moral code is not derived from Scripture, so what is the source of his moral code, which includes the right to slaughter humans and engage in unnatural sexual acts that harm bodies, minds, hearts, and souls? Do his moral convictions arise from within his own mind and heart? If so, how does he know they’re true?

Is he a scientific materialist who believes humans emerged from the primordial ooze and evolved from random happy accidents? If so, his moral beliefs are merely accidents of nature as well and have no claim on anyone. His high dudgeon would be too a biochemical accident—perhaps an undigested bit of beef—and not something rationally or morally coughed up on any elderly women of any color.

Come to think of it, what if the elderly woman had been black—someone like Dr. Martin Luther King Jr.’s niece, pro-life warrior Alveda King?  Sims would have lost a quarter of his venomous screed.

Remember this video the next time you have an opportunity to support a crisis pregnancy center, pro-life organization, or candidate for public office who has the wisdom and spine to stand boldly for the unborn. Remember it when you next have an opportunity to speak truth but are tempted to remain silent to keep the peace. And remember it as the movement to legalize infanticide grows.

And let this inspire you to speak out against the efforts in Illinois to make human slaughter even easier.