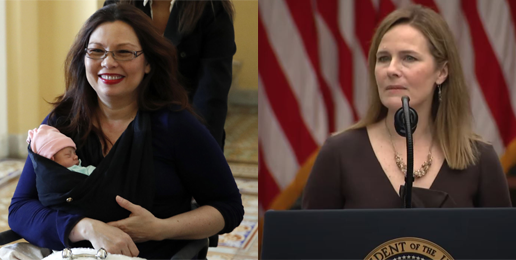 Illinois’ feckless U.S. Senator Tammy Duckworth opposes the confirmation of Amy Coney Barrett to the U. S. Supreme Court because Barrett signed a 2006 newspaper ad sponsored by an Indiana pro-life organization that said,

We, the following citizens of Michiana, oppose abortion on demand and defend the right to life from fertilization to natural death. Please continue to pray to end abortion.

In an October 2nd letter to her Senate colleagues, Duckworth said the pro-life organization whose ad Barrett signed 14 years ago opposes,

a critical step of the in-vitro fertilization (IVF) process that gave me my children.

Duckworth conveniently omitted what that critical step is.

Supreme Court nominee who appears to believe that my daughters shouldn’t even exist.

Really? Does Barrett really believe Duckworth’s living breathing daughters shouldn’t exist? If there were technology that allowed doctors to create life in a lab and grow babies in artificial “wombs,” would opposing that technology necessarily entail the belief that children created and gestated like that shouldn’t exist?

Someone might want to clarify to Duckworth that what pro-life supporters oppose is the discarding of any siblings of IVF-created children that their parents—like Duckworth—didn’t want.

Duckworth began her missive the way “progressives” like to address all debates over substantive moral issues: with a heartstrings-tugging “narrative”—a narrative irrelevant to the underlying moral issue she hopes no one will think about as they read her appeal through misty eyes.

She spent 2 ½ paragraphs describing bringing her second baby onto  the floor of the U.S. Senate “swaddled in blankets” with colleagues “cheering … as little Maile Pearl continued to sleep blissfully in my lap.” She quickly switched to describing the “deep knot of dread and anguish in the pit of my stomach” she experienced when hearing that Amy Coney Barrett had been nominated to the U.S. Supreme Court.

Duckworth experiences dread at the prospect of a woman sitting on the U.S. Supreme Court who believes all lives are of infinite value—including imperfect humans and humans Duckworth views as disposable. Duckworth feels no dread about U.S. Supreme Court Justices who have no qualms about the dismemberment of humans or about chucking humans in an incinerator, but she does experience dread about a woman sitting on the Court who is raising a disabled child and who has adopted two Haitian orphans.

Worse still, Duckworth believes all Americans should have to pay for the choice of women to order the killing of their offspring up to the day of birth for any or no reason.

Demagogue Duckworth claims that “Judge Barrett’s willingness to associate her name” with an organization that believes that humans are not disposable “is disqualifying and, frankly, insulting to every parent, hopeful parent or would-be parent who has struggled to start a family.”

Duckworth’s claim insults every American who believes the science that the product of conception between two humans is a human and who believes that all humans are of infinite worth. The feelings of other more developed or less “defective” humans about tiny humans in the womb does not abrogate the right of tiny humans to exist. Despite what Duckworth may believe, subjective feelings do not determine either reality or morality.

fear that, if confirmed to the nation’s highest court, Judge Barrett would be unable to resist the temptation of overturning decades of judicial precedent in an effort to force every American family to adhere to her individual moral code.

Duckworth must focus on “judicial precedent” because nowhere in the text of the U.S. Constitution can a right to abortion be found.

What is frightening about Roe is that this super-protected right is not inferable from the language of the U.S. Constitution, the framers’ thinking respecting the specific problem in issue, any general value derivable from the provisions they included, or the nation’s governmental structure. … It is bad because it is bad constitutional law, or rather because it is not constitutional law and gives almost no sense of an obligation to try to be.

No matter to Duckworth. She wants what she wants and will use any means to get it.

Although Duckworth isn’t an attorney, surely, she knows that all laws “force” Americans to “adhere to” someone’s moral code. Make no mistake, Duckworth and her pro-feticide collaborators have no problem forcing every American to adhere to their moral code. If they did, they wouldn’t try to force Americans to perform abortions or pay for abortions (not to mention bake cakes for faux-weddings, share locker rooms with opposite-sex persons, or use incorrect pronouns when referring to opposite-sex impersonators).

Desperate to retain laws that reflect the non-existent moral right of women to off their offspring, Duckworth concludes her letter with these patently silly words:

I hope you’ll join me in speaking out for every American family who has struggled with infertility by opposing this confirmation.

Leftists know that Barrett is eminently qualified and morally beyond reproach. They also know that since religious tests for holding office are constitutionally prohibited, they can’t again attack her religious faith as Diane Feinstein once did, so now they will start manufacturing fanciful new justifications for opposing her. Duckworth’s fanciful justification is that Barrett will try use her position on the U.S. Supreme Court to thwart the use of IVF by infertile families. Where’s an eyeroll emoji when you need one?

Take ACTION: Click HERE to send a message to U.S. Senators Dick Durbin and Tammy Duckworth to let them know that you support the nomination and confirmation of Amy Coney Barrett to the U.S. Supreme Court. We must confirm nominees who will uphold the U.S. Constitution’s protections of life and religious liberty.

Amy Coney Barrett is a proven originalist who sees her roles as limited to interpreting the U.S. Constitution. She is the type of judge conservatives have been praying for. Her faithful approach to the U.S. Constitution and her experience on the 7th Circuit federal appeals court make her an outstanding nominee.