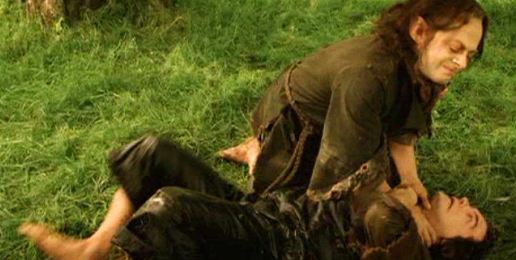 *WARNING: some graphic language not suitable for younger readers*

Residents of California’s 52nd Congressional District were just confronted with the choice between Democratic incumbent Scott Peters and homosexual “pro-choice” Republican challenger Carl DeMaio, whom the GOP establishment vigorously supported. Not only is DeMaio openly homosexual—which is no problem for House Speaker John Boehner who campaigned for him—but according to multiple accusations, DeMaio has a peculiar practice of engaging in semi-public self-pleasuring. According to Slate Magazine, a third man has recently come forward alleging sexually inappropriate conduct on the part of DeMaio:

I was at the urinal, and (DeMaio) came from the stall that was closest to the urinal and was kind of just standing there hovering….I turned around and realized that it was Carl. He had his pants up, but his fly was undone, and he had his hand… grasping his genitals.

Previously, a former colleague of DeMaio’s who served with him on the San Diego City Council told CNN that he had twice found DeMaio self-pleasuring in public restrooms, and a former campaign staffer for DeMaio, who is also homosexual, has alleged that DeMaio both sexually harassed him and engaged in onanism in his campaign headquarters office.

Thanks to the support of the Republican Party, DeMaio came very close to winning, losing by just a hair three days after the election.

A few weeks before yesterday’s mid-term election, Princeton University law professor Robert George made these comments about this California race, comments that are equally applicable to any races with RINO candidates, including Illinois races:

If I were in the district, I could not in conscience vote for the Republican. His election would do greater harm to the causes of life, marriage, and religious liberty than would the election of his Democratic opponent, as bad as that guy himself is on these issues. The question is whether to abstain or to cast a tactical vote in favor of the Democrat. In circumstances like these, I believe that tactical voting is morally permissible, and it would improve the likelihood of the least bad outcome….Abstaining is morally permissible too.

The GOP is slowly transmogrifying into the political incarnation of Tolkien’s Gollum:

Gollum, dancing like a mad thing, held aloft the ring, a finger still thrust within its circle. “Precious, precious, precious!” Gollum cried. “My Precious! O my Precious!” And with that, even as his eyes were lifted up to gloat on his prize, he stepped too far, toppled, wavered for a moment on the brink, and then with a shriek he fell. Out of the depths came his last wail precious, and he was gone.

Illinoisans should fully expect to hear immoderates and perhaps even dispirited conservatives say, “See, Bruce Rauner/Mark Kirk-type of Republican is the only kind of Republican who can get elected in Illinois.” But soon, they won’t be tacking on “in Illinois.”

Four years ago, the U.S. Senator-elect from Colorado, Cory Gardner, supported the Personhood Amendment and even circulated petitions to gather signatures for it. Then this year, the GOP establishment got to him. Shortly before Gardner announced his candidacy, pro-life activists in Colorado got wind of the news that he would be renouncing his support for the Personhood Amendment.

Karl Rove deceitfully wrote this last May: “in Colorado, tea-party favorite and front-runner Ken Buck stepped aside when Mr. Gardner entered the race, recognizing he was better able to enthuse all the party.” So, in May Rove implied that Buck just freely stepped aside because of his own uncoerced epiphany that Gardner would be the best candidate for “enthusing” the party.

That’s interesting, because late last night on FOX News election coverage, Karl Rove boasted that his Super PAC told the Colorado GOP that no Super Pac money would go to support Ken Buck for U.S. Senate. I’m speculating here, but I suspect that Rove et al told Gardner they would support him as long as he retreated from the Personhood Amendment.

Immoderate Republicans accuse conservatives who agree with Robert George of turning on their Republican brethren and “forming a circular firing squad.” But who really is Cain in this contemporary narrative? Who is Sméagol and who is Déagol?

Well, what’s done is done, and now Rauner, who proudly campaigned on his support for the “right” of women to have their own babies killed, can work the fiscal wonders for which his supporters have been slavering.

Under his mystical, magical management, Illinois should shortly be transformed into a pecuniary powerhouse. Then with fiscal victory securely in their grasp, immoderate Republicans will jubilantly announce the end of the social issues “truce” and the dawn of a new day. They will marshal all their resources—chief among them money—and announce the start of a battle—nay , a war—the likes of which  this state has never seen to protect human life at all stages, to restore a legal definition of marriage that comports with reality, to preserve religious liberty, and to eradicate “progressive” political and philosophical advocacy from government-funded schools.

Yeah, I’m sure with Rauner and Kirk at the helm of the IL GOP that will happen.