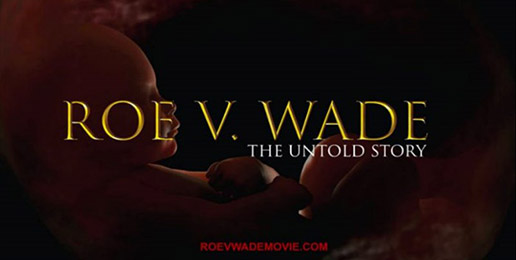 For those of who have fought for the reversal of Roe v. Wade for years, it has seemed, at times, like a giant too powerful to topple. But the landscape is changing. As little David stood with five smooth rocks in hand, one made its way to the slingshot. Maybe, just maybe, a similar rock is prepped and ready in our day. Now.

Politically speaking, the divide between abortion supporters and opponents is as wide as the east is from the west. With the Supreme Court nomination of Judge Brett Kavanaugh, the air has become increasingly volatile as the real-life prospect of overturning the 1973 landmark decision that legalized abortion nationwide is coming into view.

Also remarkable is the timing of a new film Roe v. Wade, produced by Alveda King, niece of the late Martin Luther King, Jr. The movie is currently under production and is causing quite a stir.

A number of cast and crew members have quit, citing the pro-life slant or confusion caused by the privacy requirements concerning the script. You would think it was being produced by President Donald J. Trump himself the way the liberal, agenda-driven mainstream media is going after it – thus the great need for confidentiality.

Tucker Carlson of Fox News put his finger on it when he asked director Nick Loeb a rhetorical question during a recent interview:

“If you try to make a film that doesn’t celebrate that Supreme Court decision as a watermark in the advancement of the human race, I think you’re going to run into some trouble, don’t ya’ think?”

Well, that was a mouthful.

I always find it amusing when the left refers to the court case as “Roe” for short as they make their rabid pro-abortion case – as if Roe herself was making their case. Not so. Ms. Roe (Norma McCorvey), who died last February, longed to see the case overturned. She wrote two books detailing the behind-the-scenes manipulation and lies, and her new life as a Christ follower and pro-life activist: I am Roe (1994), and Won by Love (1998).

The liberal media is working hard to discredit the Roe v. Wade movie – anything to keep the truth buried in the dark. But in the midst of the fierce attacks, the producer and director are determined to show on the big screen the back alley manipulating that brought the infamous case to the Supreme Court and to its perceived final victory.

Let’s just look at one article published by Yahoo News from The Cut as an example. The writer went so far as to link a story from Jezebel.com, an internet site sharing a name with King Ahab’s wife, the biblical supermodel of rebellion and wickedness. While the site attempted to paint Martin Luther King, Jr. as pro-abortion, Alveda clarified that while her uncle never supported abortion, his wife did, as did Alveda herself in her early years. Alveda now openly shares about her past abortions, as well as her transformation from darkness and death to light and life.

The Yahoo article criticized the movie for including Center for Medical Progress investigative video footage exposing Planned Parenthood’s sale of aborted baby organs and its eerily calloused contempt for human life. Of course, the author of the article is sure to remind her readers that Planned Parenthood “vociferously and repeatedly denied” the actions portrayed in videos that were, by the way, provided in their entirety on YouTube.

The writer also claims the film will likely be rated R because of “several graphic scenes depicting aborted fetuses,” including one showing “a dozen buckets of tiny fetuses and baby parts” found in an abortionist’s hotel room during a police sting.

It is baffling that abortion proponents find it morally repugnant to show “graphic” actual images of aborted fetuses. If it is merely a clump of cells, a parasite, contents of pregnancy, or whatever else they choose to call these precious human lives, then why is it so offensive to show?

I could go on…and on.

Before directing the film, Loeb was best known for his custody battle over frozen embryos shared with former girlfriend, Sofia Vergara. He was approached by the director/screenwriter of Roe v. Wade who explained that a 1989 made-for-TV movie about Roe v. Wade didn’t really lay out the truth surrounding the case.

When Loeb read the script, he was shocked.

“Everyone in America has heard of Roe v. Wade, but no one really knows the true story of what led up to that,” he explained.

He then went on to read about 40 different books and the bios of others linked to the story, like Norma McCorvey. And he became determined to make the truth known.

For more information about the movie, go to roevwademovie.com by clicking here.

This article originally posted at AFA.net.