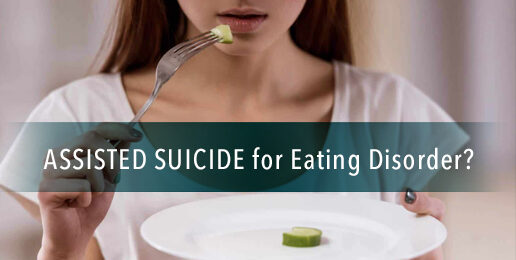 Psychiatrists Call for Assisted Suicide for Patients with Anorexia Terminal illness is a difficult subject for most people to approach. No one wants to think of themselves or their loved ones suffering from a debilitating illness. Patients with these diagnoses worry about the pain and decreasing levels of independence and hope to limit the suffering they and their families may experience. However, some politicians and physicians believe that assisted suicide is a solution to end the suffering of these terminal patients. After years of debate, several states have legalized physician-assisted suicide. Now, members of the medical community would like to extend the definition of terminal illness to include several mental illnesses, including anorexia nervosa.

Physician-assisted suicide is currently legal in nine states: California, Colorado, District of Columbia, Hawaii, Maine, New Jersey, Oregon, Vermont, and Washington. Additionally, there are legal precedents that could allow for assisted suicide in the states of Montana and New Mexico. These states have experienced a devastating increase in suicide levels as a result. The ending of these people’s lives is tragic, but even more appalling is that some would want the mentally ill to qualify for physician-assisted suicide.

The Journal of Eating Disorders, a peer-reviewed journal for those who treat and research eating disorders, recently published an article calling for states to allow psychiatrists to assist patients with severe forms of anorexia nervosa to end their lives. Anorexia nervosa is an eating disorder that is a treatable mental illness and is not considered terminal. Typical treatment for the condition includes therapy, anti-anxiety, anti-depression medications, and sometimes hospitalization to assist with various psychological and physical needs. It is a difficult disorder to overcome, but certainly not impossible.

Depression is linked to anorexia, so the patient might not even be mentally stable enough to make such a consequential decision. Psychiatrists should be trusted professionals that individuals seek to help them navigate various mental illnesses and traumas. Physicians assisting patients in ending their lives is a breach of medical ethics to “do no harm.” Psychiatrists lose their credibility by willingly allowing and even assisting patients they know are suffering from depression and perhaps other mental ailments to commit suicide.

America is no longer on the slippery slope of a declining society. Instead, we are falling into the abyss of depravity as we find new ways to kill the innocent and the infirm. Oregon legalized physician-assisted suicide in 1998. Since then, only 3.3 percent of the victims have received referrals to see a psychiatrist first. That is an alarming statistic in and of itself. Now suppose psychiatrists are allowed to define mental illness as terminal.

There would be no possibility of preventing suicide of depressed individuals that may otherwise have the chance of recovering with the proper treatment.

Life is too valuable to allow physicians and politicians to determine when the end of life should occur. The medical community should support both the terminally ill and the mentally ill in fighting for their lives and value life at every stage.

Dear friends, do not be surprised at the painful trial you are suffering, as though something strange were happening to you. But rejoice that you participate in the sufferings of Christ, so that you may be overjoyed when his glory is revealed. If you are insulted because of the name of Christ, you are blessed, for the Spirit of glory and of God rests on you. If you suffer, it should not be as a murderer or thief or any other kind of criminal, or even as a meddler. However, if you suffer as a Christian, do not be ashamed, but praise God that you bear that name.

By allowing the medical world to end the lives of the suffering, they become meddlers and murderers who stop the unique blessing that can come from suffering. How many mentally ill individuals come to salvation due to seeking God out of desperation? If they are allowed to die by suicide, they may never have the chance to become desperate for the saving grace of the Almighty. The spiritual destruction that assisted suicide laws create is the biggest tragedy of all.