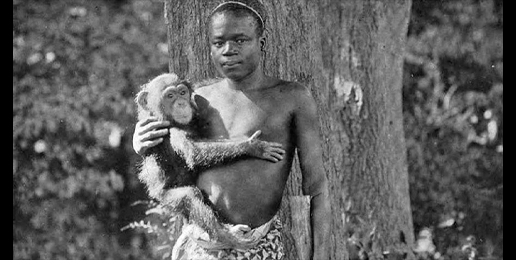 Why was a man named Ota Benga put in a display with an orangutan at the Bronx Zoo in 1906? What does this perverse act, part of our nation’s history, have to do with abortion? While the treatment of Benga and the atrocity of abortion are not identical, they do share a point in common – a refusal to recognize humanity, which leads to treating another person, or an unborn baby, as an object that can be taken, killed, or used in a way others deem acceptable.

Ota Benga, of the Mbuti people, was born in the Belgian Congo around 1881. He was a man of very short stature; as an adult he was only 4 feet 11 inches in height and weighed 103 pounds.

To those whose worldview was shaped by evolutionary thought, Benga was considered part of a primitive race, an earlier form of man on the evolutionary journey. This worldview justified the wicked and brutal actions that were taken towards these people.

Once, when Benga was out on a successful elephant hunt, his wife and children were murdered, along with others, by the Force Publique, a military group in Congo started by King Leopold II of Belgium. If this was not a sufficient trial, Benga was captured and sold into slavery. A former missionary turned explorer, Samuel Verner, purchased Benga and others to be part of a display for the 1904 St. Louis World’s Fair. This display was intended to showcase the stages of evolution.

After the World’s Fair, Benga was taken back to the Congo where he remarried. Sadly, his second wife died. With the rest of his family and clan gone, he suffered the added blow of being rejected by his people. Benga was brought back to the U.S. Facing financial difficulties, Verner offered Benga to the director of the Bronx Zoo, William Temple Hornaday. Shaped by an evolutionary mindset, Hornaday had no issue with displaying Ota Benga like an animal. This proved to be a great publicity stunt. A New York Times headline from Sept. 9, 1906 read, “BUSHMAN SHARES A CAGE WITH BRONX PARK APES; Some Laugh Over His Antics, but Many Are Not Pleased. KEEPER FREES HIM AT TIMES Then, with Bow and Arrow, the Pygmy from the Congo Takes to the Woods.”

The next week, a medical doctor, M.S. Gabriel, wrote an editorial claiming that Ota Benga was having a fine time at the zoo; there was no reason for protesting his poor treatment.

Although Benga did draw crowds, African-American pastors properly raised alarms. The New York Times responded to one of the ministers with incredible arrogance saying: “One reverend coloured brother objects to the curious exhibition on the grounds that it is an impious effort to lend credibility to Darwin’s dreadful theories … the reverend coloured brother should be told that evolution … is now taught in the textbooks of all the schools, and that it is no more debatable than the multiplication table.”

Benga thankfully was set free from the display at the zoo and was helped by an orphanage. Later he moved to Lynchburg, VA and was baptized. He attended some elementary-level classes and ended up working at a tobacco factory. He longed to return to Africa, but World War I prevented him from returning. Sadly, on March 20, 1916, he ended his own life.

On December 17, 2021 Governor J. B. Pritzker signed House Bill 370, repealing the Illinois Parental Notification Act that was first passed in 1995, but not instituted until 2013. It is estimated that this law, once enforced, saved about 1000 lives a year and reduced the number of abortions performed on minors by 55%.

Rich Miller‘s Capitol Fax newsletter recorded the praise of perverse politicians and leaders of groups that savagely prey on the unborn and young people in need. The conclusion of Miller’s article from 12/17/21 noted that Illinois increased its number of abortions to out-of-state residents from 2,970 in 2014 to 7,534 in 2019. Business is booming in this grisly trade.

Thankfully there were a few politicians and other leaders in the fight for life who expressed their horror at the passage of this law. Most of the opposition focused on the rights of parents. Some spoke of the danger of this law with respect to the trafficking of minor girls. Save for Eric Scheidler‘s statement, none of the responses directly highlighted the plight of the unborn. Parental rights are part of the issue, but even deeper is the fundamental right to life that the unborn child possesses from the moment of conception.

In 2006, one hundred years after its initial article, the New York Times wrote a drastically different column on Ota Benga, “The Scandal at the Zoo.” Additionally, in 2020, the Times noted an apology from the Wildlife Conservation Society, the group that oversees the Bronx Zoo, for its treatment of Benga and the practice of eugenics that was endorsed by two of the Society’s founders.

May the Lord awaken the hearts of those who currently are in rebellion against His truth regarding the humanity of the unborn child. If our eyes have been opened to this truth, let us not boast, yet let us not be silent in the face of the continued slaughter.