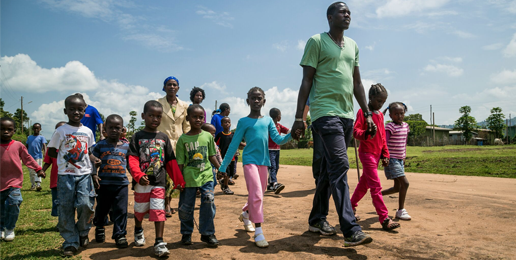 As you may know, January is Sanctity of Life month–a time when pro-life advocates host special events, rallies, marches, and projects to protest the 1973 Roe v. Wade decision that legalized the destruction of pre-born human beings. While IFI believes we should continually do what we can to deliver those who are drawn toward death (Prov. 24:11) every month of the year, January–the month during which Roe v. Wade was decided–is a particularly important symbolic time to bring to your attention an eye-opening documentary about the devil’s work to destroy innocent babies made in the image of God.

On the bank of the Omo river in southern Ethiopia, the Kara people live in relative peace with each other and with the land, believing that there is a “God who created us and nature . . . when the rain comes, that is God.” But in their belief, this fruitfulness came at a great cost.

When a child was born into the tribe without the blessing of an elder or outside of marriage, or if his top teeth grew in before his bottom teeth, that child was called “Mingi,” or cursed. According to the Kara people, if this child were allowed to live, he or she would bring a curse upon the entire tribe and their land. Thus, per the tradition of the tribe and their ancestors, every Mingi child was killed soon after birth, often being thrown in the bush or drowned in the river.

The people saw this as necessary and were too afraid to oppose or question the elders, but a young Kara man named Lale sought to change that. One of the first in the tribe to leave for an education, Lale returned as a married man intent on rescuing Mingi babies. “I will be the river,” he told fearful mothers. “I will be the bush.” In memory of his sisters, both of whom were Mingi, Lale and his wife helped rescue and raise many of the “cursed children,” ultimately even helping the tribe to reverse the practice altogether. “It was like a resurrection,” one of the men said after seeing the grown Mingi children return to the tribe.

The full story of the Kara people, their customs, and one man’s influence to end the destructive superstitious practice is presented in moving detail in the documentary Omo Child, named for the organization Lale and his wife founded to care for the children, and available for streaming through Amazon Video.  It is a story of movement from stubborn darkness to hope that tells the tale of a people who learned to recognize and fight for the sanctity of all life.