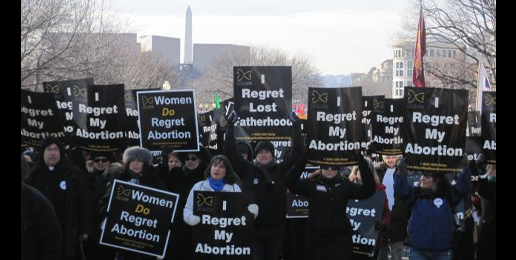 For years, the abortion industry has denied, downplayed, and deflected on any link between abortion and depression. Abortion proponents have insisted that post-abortion syndrome is a “makey-uppy thing” and denied the reality of abortion regret. In doing so, they have consistently trivialized the real experiences of women who have been harmed by the abortion industry and have suffered through abortion regret when faced with the realization that their abortion ended their child’s life.

Now, a pro-abortion researcher has come forward and said that the medical community resisted publishing his research pointing to a link between abortion and depression. Dr. David Fergusson’s 30-year longitudinal study was published in 2006. He recently told the New Zealand Herald that his study, which is frequently downplayed by the abortion industry, was rejected by three different medical journals, something that he said is very unusual, noting that his research team’s work is typically accepted the first time they submit it for publication. Although Fergusson himself is not pro-life, this study, which presents strong evidence against an abortion industry talking point, was stifled.

Fergusson’s study found that 42% of women who had undergone an abortion in the past four years struggled with depression — over twice the rate of women who had not undergone an abortion. In addition to the difficulty he faced in getting his results published, Ferusson has faced pushback in the years since publication. “Because it’s not ‘completely conclusive’, then they say we know nothing,” Fergusson told the New Zealand Herald,

But no science is completely conclusive – it’s cumulative. Our study is strongly suggestive of a link between abortion and developing mental illness. What people should be saying is, ‘This is interesting … we need to invest more to answer this important question’.

He has been equally frustrated by the continued resistance to further research on this topic since then, saying,

It verges on scandalous that a surgical procedure that is performed on over one in 10 women [in New Zealand] has been so poorly researched and evaluated, given the debates about the psychological consequences of abortion.

Abortionists and their allies frequently downplay pro-life research pointing to the link between abortion and mental health struggles, claiming that the studies are “biased” but Fergusson’s interview shows that Big Abortion’s allies are no more friendly to pro-abortion researchers who try to publish findings that challenge popular abortion narratives. Even with this resistance, Fergusson’s study is not the only one that has pointed to the reality of post-abortion regret. Numerous studies have pointed to the mental and emotional harm of abortion including one which found that women who have had an abortion are at higher risk for suicide. Dr. Anne Speckhard, formerly of the University of Minnesota, has studied post-traumatic responses to abortion, pointing out the prevalence of women who exhibit signs of PTSD after undergoing an abortion.

In the decades since Roe, the science of life in the womb has left pro-abortion talking points in tatters as the humanity of the unborn and the fact that life begins at conception prove undeniable. And although suppressed and dismissed, research has also pointed to the serious harm that abortion does to women and families. As the evidence continues to point to the fact that abortion not only destroys the life of an unborn child but also harms the child’s mother and father, the abortion industry and their allies cannot claim to be the compassionate ones. Abortion has far-reaching consequences for all of society. For the sake of women, men, children, and families, we must make abortion illegal and unthinkable.