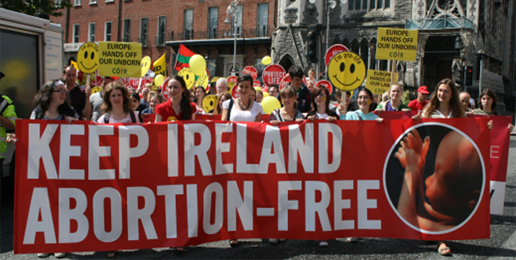 Ireland Votes to Kill Unborn Babies with the Help of Facebook, Twitter and Google
Written By John Biver   |   06.01.18
PRINT

Last week the people of Ireland voted to repeal Ireland’s Eighth Amendment that granted “equal protection of the right to life of the preborn child and his or her mother.” After the repeal, “legislators will have the power to legalize abortion for any reason up to birth.”

Leading up to the vote, however, Facebook, Twitter and Google all weighed in — arguably on the side of the pro-abort forces:

Leading up to the May 25th referendum in Ireland on repealing the Eighth Amendment, Google announced that it would suspend all advertising related to the subject. The move has been condemned by pro-life groups as an attempt “to rig the election.”

In the announcement, Google claimed the decision came as part of “our update around election integrity efforts globally.” Pro-abortion groups applauded the decision, but as observers have noted, the only ads related to the referendum appear to be pro-life ads, so the ban would effectively benefit the pro-abortion campaign and harm campaign efforts for life in Ireland.

Also, from the article:

The repeal campaign has benefitted from marked pro-abortion bias in the media, celebrity endorsements and significant funding from the international abortion lobby. As such, the pro-life campaigners are at a disadvantage and have used online advertising on Google and social media platforms to reach voters with their message. The pro-life groups Save the 8th and the Iona Institute issued a joint statement that read in part, “Online was the only platform available to the No campaign to speak to voters directly. That platform is now being undermined in order to prevent the public from hearing the message of one side.”

Twitter has also announced that it will suspend ads related to the referendum ahead of the May 25th vote. Twitter has a confirmed history of censoring pro-life content.

Facebook also “jumped on the bandwagon” to ban ads. The article notes that “the pro-abortion side is far from immune from outside influence as this side has received significant monetary support from George Soros and other globalist elites.” The question whether the social media giants would’ve issued the restriction “if a surge in advertising had come from the Yes [pro-abortion] side?” is worth asking.

Facebook claimed “neutrality” in a statement: “We understand the sensitivity of this campaign and will be working hard to ensure neutrality at all stages… Our goal is simple: to help ensure a free, fair and transparent vote on this important issue.”

Do you believe them?

There is plenty of reason not to. After all, the way the social media giants have been caught censoring conservatives, the claim of neutrality isn’t believable in the least. To read more about that — skim the many articles linked here.

After the 2016 elections, those social media giants realized that if their political agenda was to be advanced, they were going to have to clamp down even further on the information being provided by conservative organizations. Here was a headline at The Daily Signal: “After Royally Screwing Up the Election, the Media Want Control Over Your Facebook News.”

If the social media giants are indeed Leftists and committed to silencing conservatives, what is to be done?

An interesting article recently posted at National Review about whether those big tech companies are violating anti-trust laws. Here is an excerpt:

There is a strong Republican antitrust tradition.

The big digital monopolies demand that we conform to their worldview and shut us down when we dissent. They have too much power. They are are threat to this country. Congress is doing nothing about it. It’s time to complain, while we still can. #Tucker @FoxNews

When he tweeted these words, Carlson was expressing a sentiment that many on the right have come to embrace. People are concerned, with good reason, that big tech companies discriminate against conservatives. Numerous conservative outlets have had their videos demonetized on Google’s YouTube. PragerU is appealing their loss in a lawsuit over that. A study by The Western Journal showed that a change to Facebook’s algorithm disproportionately harmed conservative sites.

In normal circumstances, this wouldn’t be a problem for government to solve, but social media has come to dominate our national conversation. Large political websites thrive or die based on changes to Facebook and Google algorithms. Everyone from cable news to newspapers to online-only publications create and tweak their content based on how they think it will play on social media. A study has also shown that Google search results can have a frighteningly large impact on elections:

Randomized, controlled experiments conducted with more than 10,000 people from 39 countries suggest that one company alone — Google LLC, which controls about 90 percent of online search in most countries — has likely been determining the outcomes of upwards of 25 percent of the national elections in the world for several years now, with increasing impact each year as Internet penetration has grown.

Keep in mind that we’re not talking about individuals or even whole industries here; we’re talking about unaccountable monopolies with detailed information about hundreds of millions of Americans, billions in cash reserves, and the capability to shape what is discussed and what is not discussed in America in a way that no book, radio show, television show or individual has ever had.

The entire article can be found here.

Not everyone agrees. You can read an opposing view here.

Earlier this year, IFI asked the question “What is the Conservatives Movement’s Answer to Google, Facebook, Twitter, and YouTube’s ‘Viewpoint Discrimination’?‘” That question is still on the table.

So many smaller groups often rely on the relatively inexpensive social media advertising options to help make more people aware that there are other arguments other than those coming from the Leftist “mainstream” media, Hollywood, and any number of other outlets.

This issue, and this challenge, isn’t going away any time soon. There is plenty of talent and resources available on the conservative side of the aisle. Eventually that talent and those dollars will have to get serious about winning the information war — with the help of Leftist social media giants or not.