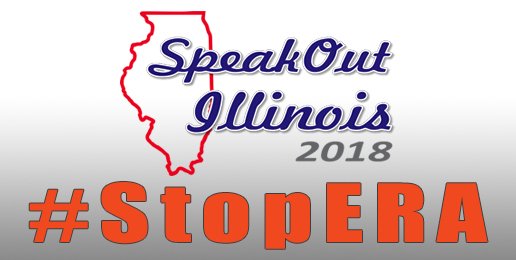 If you pay just a little attention to the political fray that engulfs the country, you quickly realize that Leftists have trouble with the truth. They never disclose their real intentions when it comes to public policy. A “modest” tax increase is sold as a solution when it’s just the next step on the way to increasing the tax burden on families. Their call for “Civil Unions” was merely a move towards homosexual “marriage.” And now, “equal rights” is being pushed with an equally deceptive sales pitch.

In an effort to shine the light of truth on the Leftist lies surrounding the effort to have Illinois to pass the “Equal Rights Amendment,” SpeakOut Illinois, a coalition of thirty-two pro-life organizations* representing over 100,000 constituents, has weighed in.

The coalition opposes the amendment “primarily because its supporters refuse to add language that would guarantee that that it would not grant or secure any right relating to abortion or the funding of abortion.” SpeakOut’s chairman Ann Scheidler said that, “without language that would prohibit further expansion of abortion and abortion funding, we must oppose this amendment. We cannot risk the lives of unborn children, and the likely reversal of the restrictions that have been gained over the past forty-five years.”

The list of Left-wing groups who are behind the ERA speaks volumes to anyone who is unclear on the ramifications of this amendment: Planned Parenthood of Illinois, ACLU of Illinois, National Organization for Women, Equality Illinois, Women’s March Chicago, and some you’ve probably never heard of. Need I say more?

Below is the official press statement from the coalition. For more information about this issue, please click HERE.

“The real danger with the Equal Rights Amendment (ERA) is that it would further enshrine abortion as a constitutional right,” said Ann Scheidler, Chairman of the SpeakOut Illinois Coalition.

The Equal Rights Amendment resolution, SJRCA 4 is before the Illinois House of Representatives having passed in the Illinois Senate on April 11.  Should it pass in Illinois, supporters would need only one more state in order for the amendment to become part of the United states Constitution.

The original attempt to ratify the ERA stalled in 1979, three states short of the required thirty-eight states. Congress granted a three-year extension, but no additional states had approved the amendment at the end of that period.

SpeakOut Illinois, a coalition of thirty-two pro-life organizations, representing over 100,000 constituents, opposes the amendment primarily because its supporters refuse to add language that would guarantee that it would not grant or secure any right relating to abortion or the funding of abortion.

“Without language that would prohibit further expansion of abortion and abortion funding,” said Scheidler, “we must oppose this amendment.  We cannot risk the lives of unborn children, and the likely reversal of the restrictions that have been gained over the past forty-five years.”

Take ACTION: Please CLICK HERE to contact your state representative to ask him/her to vote AGAINST the ERA, SJRCA 4. It’s essential for us to let our lawmakers know that this amendment harms women, their families, and our society, because many still believe the lie that it’s all about equal rights. Your calls and emails are vital tools for fighting this destructive proposal.

You can also call your state representative to ask him/her to vote NO to SJRCA 4 by calling the Capitol switchboard number at: (217) 782-2000. CLICK HERE to access their name and contact information. Your state rep and senator will appear as the last two names listed.

To submit a witness slip in opposition to SJRCA 4, CLICK HERE. For an individual not representing a group, fill out your name and address, type self in Section II, click Opponent in Section III, click Record of Appearance Only in Section IV and accept the Terms of Agreement and click Create Slip.

* The thirty-two pro-life groups include: