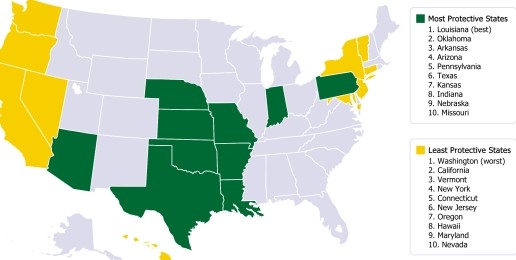 There is a new study out from Americans United for Life (AUL) that looks at the abortion policies in all 50 states.  It concludes that Illinois is the 27th on how well we protect life in law.  The good news is that in 2013 AUL listed Illinois as 36th in its ranking, and claims that Illinois is among the most improved states for 2014, saying:

…after eight years of litigation, a 2005 Executive Order forcing pharmacists and pharmacies to dispense so-called “emergency contraception” “without delay” was invalidated; and where, after decades of obstruction by abortion advocates, the state’s parental notice requirement for abortion finally went into effect.

The best state for pro-life policies was Louisiana — a distinction it has held for five years in a row — followed by Oklahoma, Arkansas, Arizona, Pennsylvania, and Texas.

The worst state for pro-life polices was Washington — a distinction it has held for five years in a row — followed by California, Vermont, New York, and Connecticut.

“As the legal architects who, since the days immediately following the deadly Roe decision, have championed the strategy of using expertly crafted model legislation to protect life, AUL has tracked states’ progress toward achieving a nation in which everyone is welcomed in life and protected in law,” noted AUL President and CEO Dr. Charmaine Yoest. “Real pro-life momentum is reshaping the country as legislators craft protections for both mother and child, the victims of an avaricious abortion industry. Common-sense pro-life legislation saves lives and has broad public support in light of what we’re learning about the health risks of abortion for women.”

Abortion Pills Being Sold Online
b
a
x
r