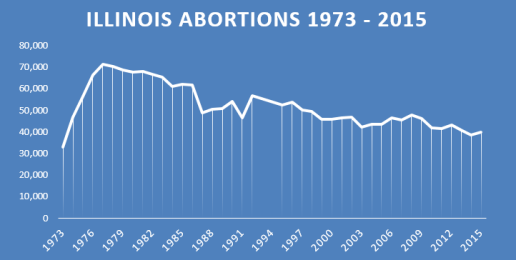 The Illinois Department of Public Health recently released updated statistics on abortions for 2015.  The number of pre-born human babies aborted in Illinois increased by 1,384 in 2015 to a total of 39,856.  The Illinois Abortion Law of 1975 (720 ILCS 510/10) requires the Illinois Department of Public Health to gather this information from all “health care providers statewide who performed pregnancy terminations.”  Nationally, the number of abortions has been decreasing and that has been the general trend in Illinois until now.  The Illinois data is available HERE.

There were 274 unborn humans aborted between 20 and 23 weeks gestation in Illinois during 2015.  Unborn humans at that level of development are viable outside the womb or just days from being viable.  They look like a tiny newborn at that age.  That means on average each week, 5 viable or nearly viable unborn humans are aborted in Illinois.

What’s Not In The Report

This data includes surgical abortions and the abortion pill (RU 486), but it does not include the following statistics:

♦ the sale of abortifacient drugs and devices which result in newly created humans dying, including birth control, the patch, minipill, NuvaRing, Yaz, Yasmin, IUD’s, Plan B, and Ella.

♦ the number of unborn humans frozen in IVF clinics and how many of those humans died.

♦ data on embryonic stem cell research where newly created human beings are destroyed for the purpose of experimentation.

♦ information on the sale of organs and tissue from aborted humans.

Residences Of Mothers Summarized By Area

Of the abortions where the mother’s residence was reported

♦ 21% lived in areas of Cook County outside of Chicago

♦ and the rest were spread throughout the state.

Marital Status And Age Of Mothers

Of the abortions where the mother’s marital status was reported:

Of the abortions where the mother’s age was reported:

How To Save Women And Babies From Abortion

In 2016, pro-life groups reached 8.8 million views around Illinois with the bold message “Abortion Takes Human Life.”  Come and build on that success in 2017 by attending upcoming pro-life overpasses and by donating to pro-life billboards at AbortionTakesHumanLife.com.

Take ACTION: Please click HERE to send a message to your state representative to ask him/her to stand strong for the unborn’s right to life and against any pro-choice legislation that may be introduced in the next few weeks or months.

Upcoming Event:  Join thousands at March for Life Chicago 2017 as we come together from across Chicago, the Midwest and the U.S. to defend, protect and celebrate LIFE on January 15th!