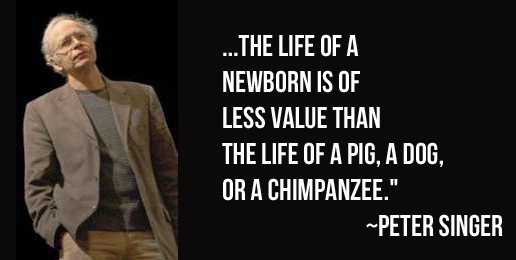 A troubling video has emerged in which a college student was asked if it should be morally permissible for an impoverished family to kill their 2-year-old or 5-year-old if doing so would improve the family’s condition. He answered that if society were to approve of this type of act, logic dictates it should be permissible, and he would be okay with it:

It’s odd, “progressive” men seem to be allowed carte blanche to express their views on women’s “right to choose,” while conservative men are continually harangued by feminist harpies that they have no such right. Curiouser and curiouser.

Of course, neither logic nor morality dictates such a position, but this kind of utilitarian, relativistic anti-moral code is not unusual among Millennials or within our increasingly “sub-pagan” anti-culture:

About 15 years ago, when I was substitute teaching in a Senior Advanced Placement English class at Deerfield High School, a conversation arose regarding absolute truth. The majority of students asserted that there exist no absolute, transcendent, eternal moral truths. (This was especially troubling within a heavily Jewish community in which the Holocaust is more than a historical footnote.) The rest of the students remained silent.

The notion that there are no absolute moral truths informs the controversial work of Peter Singer, Princeton University bioethics professor, who argues the following:

When the death of a disabled infant will lead to the birth of another infant with better prospects of a happy life, the total amount of happiness will be greater if the disabled infant is killed. The loss of happy life for the first infant is outweighed by the gain of a happier life for the second. Therefore, if killing the haemophiliac infant has no adverse effect on others, it would, according to the total view, be right to kill him.

Regarding newborn infants as replaceable, as we now regard fetuses, would have considerable advantages over prenatal diagnosis followed by abortion. Prenatal diagnosis still cannot detect all major disabilities. Some disabilities, in fact, are not present before birth; they may be the result of extremely premature birth, or of something going wrong in the birth process itself. At present parents can choose to keep or destroy their disabled offspring only if the disability happens to be detected during pregnancy. There is no logical basis for restricting parents’ choice to these particular disabilities. If disabled newborn infants were not regarded as having a right to life until, say, a week or a month after birth it would allow parents, in consultation with their doctors, to choose on the basis of far greater knowledge of the infant’s condition than is possible before birth.

Though Singer has a more, shall we say, limited and nuanced defense of child-murder than the Millennial stars of the above videos, the implication of the idea that older, more developed humans have the right to kill younger, less developed, innocent humans is evidenced in the increasing comfort with both infanticide and euthanasia that is spreading within our sickening culture.

It’s worth noting that every year the anti-ethics ethicist Singer is invited to the far-Left Chicago Humanities Festival, which runs from Oct. 24-Nov.8, 2015,  and speaks to sold-out crowds.

Singer’s views have metastasized not merely to the ignoramus-on-the-street but to academicians like Dr. Alberto Giulibini and Dr. Francesca Minerva who in a 2012 article published in the Journal of Medical Ethics defended the right to kill newborns who, in the doctors’ views, are  merely “potential persons”:

If criteria such as the costs (social, psychological, economic) for the potential parents are good enough reasons for having an abortion even when the fetus is healthy, if the moral status of the newborn is the same as that of the foetus and if neither has any moral value by virtue of being a potential person, then the same reasons which justify abortion should also justify the killing of the potential person when it is at the stage of a newborn.

While these views may seem anomalous, remember President Barack Obama and Senator Mark Kirk opposed bans on partial-birth/late-term abortions, which are just inches or days from infanticide.

Divers social and intellectual shifts, including widespread embrace of apostasy and heresy, relativism, subjectivism, radical autonomy, and post-modernism, collude with the institutional forces of Hollywood, academia, and the mainstream press to dismantle and destroy culture. And who suffers most? Children, always children.

Donate to the work & ministry of Illinois Family Institute!