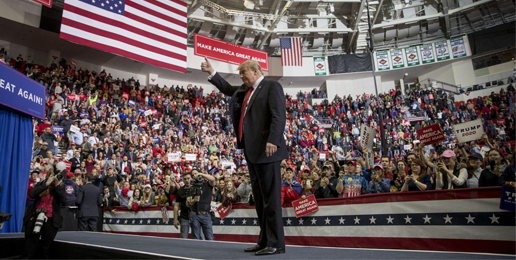 As expected, pundits on the left are in an uproar at the president’s claims that a doctor conspires with parents as to whether to execute their newborn baby. In Trump’s words (spoken at a recent rally in Green Bay), “The baby is born, the mother meets with the doctor, they take care of the baby, they wrap the baby beautifully. Then the doctor and mother determine whether or not they will execute the baby.”

In response, Rolling Stone senior writer Jamil Smith tweeted, “President Trump keeps telling the same lie about abortion doctors murdering healthy fetuses after delivery. This doesn’t happen. Yet he said it again last night. This is precisely the kind of hysteria that inspires people who murder doctors and patients.”

Julia Pulver, a former neonatal nurse, said this: “When a baby dies in the hospital, it is a very sad thing but it is not something that is ever chosen. It is a horrible situation thrust upon parents who want their baby, who have prepared for the baby, who have framed sonograms sitting on their desks.”

According to Ilyse Hogue, president of NARAL Pro-Choice America, “What Trump asserted, for the second time, is false, illegal, and simply not happening — nor would it happen.” She claimed that, “The president “not only straight-up lied but also vilified women, families, and doctors facing situations every single one of us prays we never encounter.”

And Huffington Post adds this: “The recent focus on the alleged horrors of late-term abortions is especially fact-free. Only 1.3 percent of abortions take place after 21 weeks, and experts say these involve pregnancies that endanger the mother (and by extension the baby) or severe fetal anomalies that are incompatible with life.”

Let’s address these claims one at a time.

First, President Trump said nothing about the baby being healthy (contra the tweet of Smith). Instead, he spoke about the very real situation in which a baby survives an abortion (or, presumably, is born with a life-threatening defect) and is allowed to die. That’s why Congress keeps trying to pass the Born Alive Protection Act.

In its current form, the bill reads, “To amend title 18, United States Code, to prohibit a health care practitioner from failing to exercise the proper degree of care in the case of a child who survives an abortion or attempted abortion.”

This is a real bill designed to address real, life and death situations.

Not only so, but it was Virginia governor Ralph Northam who provided Trump with his main talking points about infanticide.

Yet the left rails on Trump for calling this out rather than on Northam for saying it.

To repeat: These things are really happening.

An official government document dated September 23, 2016, notes that, “In 2002, Congress responded by passing the Born-Alive Infants Protection Act, which was signed by President George W. Bush and is current federal law. This law recognized a child who is born alive after a failed abortion attempt, as a legal person under the laws of the United States. The legal definition of live birth includes any sign of life, such as breath, heartbeat, pulsation of the umbilical cord, or definite movement of voluntary muscles.

“Unfortunately, incidents involving born alive children being killed after an attempted abortion have continued after this law was passed. Infanticide is unacceptable in a civilized society, regardless of what one may think about abortion itself. It should be uncontroversial for the federal government to supplement current law with enforcement protections for born-alive children after attempted abortions. That is why Congress must pass the proposed legislation known as the Born-Alive Abortion Survivors Protection Act (H.R. 3504/S. 2066).”

Trump is not lying. These things are happening. They may happen just as he described (with the baby being wrapped in a blanket) or they may not (perhaps the baby is left naked and crying on a table). But they are happening, nonetheless.

Yet, to repeat, there’s no outcry from the left about these horrors. The outcry is about the president drawing attention to the horrors.

As noted by Tony Perkins, “Liberals certainly thought infanticide was real enough in 2002, when protecting infants was so uncontroversial that it passed without a single Democratic opponent. Since then, the CDC’s data only confirms these atrocities — as do mountains of eyewitness testimony, grand jury reports, survivors’ own stories, and admissions by doctors like Northam himself!”

According to a just-released CDC report, in New York City in 2015, “the number of abortions at or after 21 weeks was 1,485 while the number of homicide victims was 352.”

Shall we celebrate the fact that this (allegedly) represents “only” 1.3 percent of abortions?

These, in short, are the facts: States like New York have passed laws allowing for abortions right up to the time of delivery. Infanticide is taking place. And in countries like the Netherlands, “650 babies a year [are] euthanized so that their parents don’t have to witness them struggle with disability or disease.”

In light of all this, I’m glad that President Trump continues to speak up. He is addressing something terribly evil, and it behooves every person of conscience to stand with him in standing for the rights of “the least of these.”