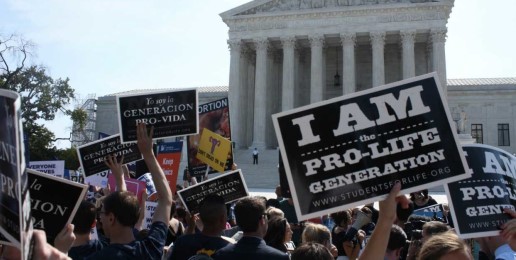 Lurking behind the annual split among Americans over the labels “pro-life” and “pro-choice” is a new reality. The fact is that today, whatever label they choose, Americans overwhelmingly support abortion restrictions.

Pro-choice politicians who typically support unrestricted, or almost unrestricted, abortion share the extreme view of a tiny minority of the American people.

Consider this. A majority of Americans who identify as pro-choice (62 percent) say that abortion should be restricted to–at most–the first trimester of pregnancy. Less than a quarter of them (22 percent) want unrestricted abortion.

Among Americans as a whole, the number who want such abortion restrictions is about eight in 10 (78 percent). Only about one in 10 of this group (13 percent) would leave it unrestricted.

Almost twice as many American voters would limit abortion to–at most–saving the life of the mother (24 percent) as would allow it any time.

It’s not a partisan issue either. Strong majorities regardless of political identity would restrict abortion to the first trimester, at most. This includes about two-thirds of Democrats (65 percent), as well as eight in 10 independents (80 percent) and nine in 10 Republicans (93 percent). There are few issues in our country on which you find such a strong consensus from across the political spectrum.

The polling we commissioned on this issue was done by the gold standard in public opinion research: Marist. That’s the same pollster used by NBC News, McClatchy, and the Wall Street Journal.

The numbers have been consistent on this for nearly a decade. Americans overwhelmingly support substantial restrictions on abortion. “Pro-life” politicians typically support bills consistent with this national consensus.

Nevertheless, self-identified “pro-choice” politicians generally hew to a policy orthodoxy that allows for no restrictions at all on abortion–even though it’s a view hardly ever shared by their constituents.

The typical “pro-choice” politician today represents the most radical view of abortion in the country–a view they share with only about one in 10 Americans (13 percent).

Some of these politicians celebrate abortion as a right that should not be restricted in any way. That’s the same line taken by the abortion industry, whose livelihood depends on performing this destructive procedure.

Other politicians hide behind the idea that they are “personally opposed” to abortion, but cannot impose their will on the majority. What majority are they talking about? Nearly everyone in the country wants solid restrictions on abortion, making such a position either ignorant or dishonest.

If a politician is really “personally opposed,” he should have the decency to follow his conscience and not block the vast consensus on this issue.

Better yet, he could take John F. Kennedy’s advice who said when running for president in 1960 that he would resign if his conscience came into conflict with what he saw as the public interest. Kennedy said he hoped “any conscientious public servant would do the same.” That’s still good advice, and a worthy wish, five decades later.

Instead, the opposite is occurring.

Despite the American consensus on this issue, more and more extreme positions are being proposed by pro-abortion politicians.

Some are pledging to repeal the Hyde Amendment, which bans tax dollars from being used to pay for abortions–contrary to Americans’ view that tax dollars should not be used this way.

Nearly two in three Americans would prohibit the use of tax dollars for abortion (62 percent). This includes more than four in 10 Democrats (44 percent), more than six in 10 Independents (61 percent) and more than eight in 10 Republicans (84 percent).

Those who identify as pro-choice are split too, with 45 percent saying tax dollars should not be used for abortion.

Abortion is now the number one cause of death in America. With more than 50 million abortions since the Roe v. Wade Supreme Court decision, no other issue comes close in scale. And yet, each year, another million abortions are allowed to occur by politicians who turn a deaf ear to the will of the people and oppose restrictions.

Carl Anderson is the CEO of the Knights of Columbus and a New York Times bestselling author.