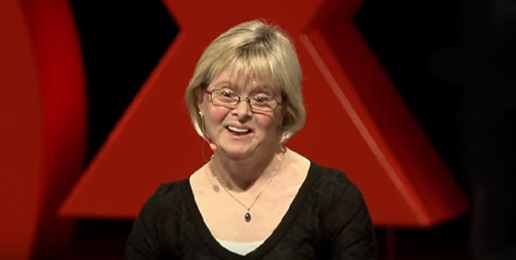 In a TEDx talk called “I have one more chromosome than you. So what?” disability rights advocate Karen Gaffney commented to her audience, “Imagine that, ladies and gentlemen. Here we are… removing barriers to education, making inroads into a full and inclusive life for people like me, and we have those who say we shouldn’t even be born at all?”

Born in 1977, Gaffney grew up in a time when the neglect and mistreatment of people with Down syndrome had recently been brought to light by disability rights advocates calling for reform. The late 1960s and early 1970s saw the beginning of the end of mass institutionalization, but as recently as the 1980s, babies with Down syndrome could be denied life-saving treatments and even food and water until an act of Congress prohibited this kind of discrimination.

Recent decades have seen remarkable strides in the advancement of the rights of people with disabilities. Unfortunately, ableist assumptions about the “quality of life” of people with disabilities are still far too common and have lethal effects. Currently, the majority of preborn babies diagnosed with Down syndrome in the U.S. and in many European nations are aborted. Gaffney is one of many individuals with Down syndrome speaking out against this injustice. “I believe Down syndrome is a life worth saying yes to,” Gaffney told her Portland audience. “It is a life worth saving.”

Tragically, the U.S. is on a similar trajectory with between 67 percent and 75 percent of babies who are diagnosed with Down syndrome being aborted. Too many medical professionals encourage parents to abort and “try again” rather than equipping them with resources and support for raising a child with special needs and reminding them that they are not alone. This attitude toward people with Down syndrome has even led parents to sue for “wrongful birth” because they would have aborted their child if they had known he or she would be born with Down syndrome.

The idea that someone’s life is less valuable if they are disabled flows out of the belief that a person’s worth is not innate but is based on what he or she can do. This is not only a horrible devaluation of fellow image-bearers that reaps deadly consequences when brought to its logical conclusion, but it also shows a failure to understand what makes people valuable in the first place. No one’s value or dignity comes from their abilities or lack thereof and we must never attempt to base anyone’s worth, our own or someone else’s, on something so fragile and transient. Each of us is priceless because we are made in the image of our Creator, and that is why each life is “a life worth saying yes to.”

People with disabilities should not have to plead for elected officials, medical professionals, or society as a whole to recognize their value. The ableist eugenics of disability-based abortion must end, and discrimination against people with disabilities, born or unborn, must never be tolerated. We must proclaim the value and dignity of each and every human life, fight for the protection of the vulnerable, and help people to understand that their value comes from the fact that they are made in the image of God.

This article was originally published at MFC.org.

Taking Pride in Down Syndrome Children

Hope for the Preborn
b
a
x
r