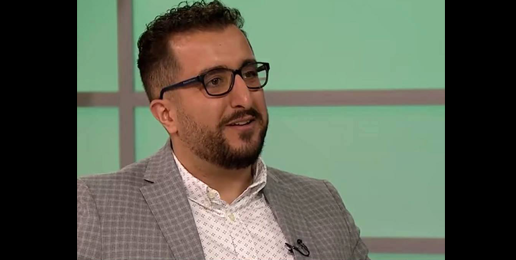 How did you come to faith in Jesus? For most of us, a parent, grandparent, Sunday school teacher, or other influential person in our life shared the Gospel with us, answered our questions, encouraged and prayed over us, leading us to the point where we were ready to embrace Jesus as our Lord and Savior. No doubt we’ve heard of someone who came to faith in Jesus by reading a tract, watching a Billy Graham crusade on television, maybe listening to Ray Comfort ask probing question, or hearing a teaching program on a Christian radio station, but usually decisions to follow Christ are the result of frequent, personal interaction with an established believer.

In the video below, Mark Issa gives his testimony of how he became a disciple of Christ. His story is fascinating, and far from typical by the standards of western Christianity. Issa was born in Kuwait, but grew up in war-torn southern Lebanon in a secular Muslim home – his father didn’t take him to pray in the mosque or teach him Islam or the Quran. At age 16, after 9/11, Issa’s latent spirit of anger and resentment toward Israel, the United States, and other Israeli allies was kindled. He decided to learn more about Islam, becoming a radical Muslim, and then, jihadist, from information he gleaned from Islamic jihadist websites on the deep web.

Disillusioned that the Arab Spring freedom uprisings didn’t bring about the changes he anticipated, Issa decided to relearn Islam. This time, with a more objective perspective, Islam was revealed to him as “nothing but a large Ponzi scheme … falsely labeled as a religion of peace.” He embarked on an agnostic journey, examining various philosophies and religions solely by means of YouTube videos and online media. The teaching programs of Ravi Zacharias International Ministries, along with his reading of the Word of God, were instrumental in Issa’s decision to accept Jesus Christ as Lord and Savior in 2016.

Liberated from the lies of Islam by the freedom found only in Jesus, Issa now serves the Lord in a media ministry that targets Muslims. Striving to “win back the Middle East to Jesus Christ,” Issa uses media to reach Muslims and Arabs with the truth about the Lord he loves.

Praise God for our brother in Christ and his testimony to the Lord’s grace and love!