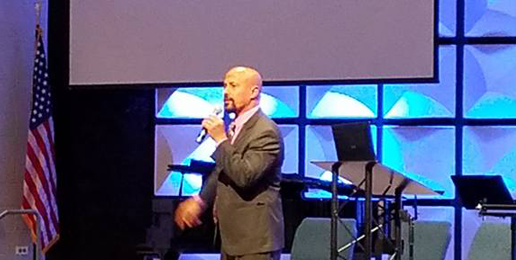 Egyptian born Usama Dakdok is the author of The Generous Qur’an, An Accurate, Modern English Translation of the Qur’an, Islam’s Holiest Book. He studied Islamic law in college, and is now a Christian. In his remarks, he addressed head-on the claim that “radicalization has nothing to do with Islam.” “Are we really that stupid?,” he asked.

For those who claim jihadists distort Islam, Dakdok asked, “Have you ever read the Koran?” He cites verses which, he says, even a child can interpret — “Allah is a terrorist.” Dakdok gives verses 3:151 and 8:12 as easy-to-understand examples. “They are called radicals,” he said, when they should really just be called “believers.”

Giving the example of how just a few years ago Egyptians overthrew the Islamic government, Dakdok asks “where is the church in America?” He suggests that the church here is in a coma, because if it was only asleep, it would eventually wake up. ISIS is 100% Islam, he said, but the Muslim Brotherhood does not want that fact revealed.

You can watch it here below, or click HERE.