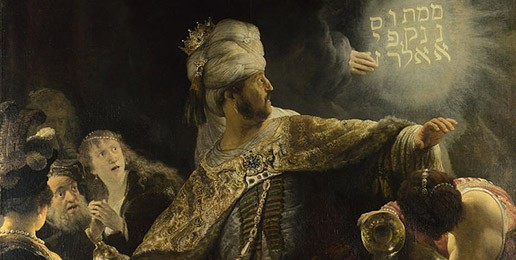 Knowing Four Arabic Words May Save Our Civilization from Islamic Takeover
05.05.15
PRINT

In 539 BC, King Belshazzar of Babylon saw a dismembered hand-written four prophetic words on the wall. This “handwriting on the wall” was finally interpreted by the prophet Daniel as predicting the fall of the kingdom. He was right. Babylon fell to the Medes-Persians that very night.

Like the “handwriting on the wall” that Prophet Daniel had interpreted, there are four Arabic words, which could lead to submission of the entire world to Islam, if non-Muslims do not fully understand their meaning and implications. Those words are takiyya, tawriya, kitman, and muruna.

Each of these words describes a different style of deception used by Muslims when discussing Islam or their activities as Muslims.Muhammad famously said, “War is deceit.” (Bukhari, Vol. 4, Book 52, Number 268)  The Quran boasts that Allah is the “master of all scheming” (Surah 13:42) and that he is “profound in his machinations” (Surah 8:30). Western civilizations are not accustomed to dealing with people, who have developed deception into an art form. Knowledge is power, and the best way to combat the Islamist agenda is to say, “We are wise to your shenanigans. Knock it off!”

Takiyya is defined as dissimulation about ones Muslim identity. It comes from the verse in the Quran that says, “Let believers not make friends with infidels in preference to the faithful – he that does has nothing to hope for from Allah – except in self-defense (illaa an-tattaqu minhum tuqah) (Surah 3:28). This “self-defense” justifies dissimulation. Islamic Sharia Law provides, “When it is possible to achieve an aim by lying but not by telling the truth, it is permissible to lie if attaining the goal is permissible, and lying is obligatory if the goal is obligatory.” (Reliance of the Traveler, Para r8.2) Examples include lying to protect Islam or a Muslim.

Tawriya is defined as concealing, and it could be called “creative lying”. It is OK to break the intent of the oath, as long as you don’t break the letter of the oath. (Reliance of the Traveler, sections o19.1 and o19.5) How does this work? Suppose someone protests that Surah 1 of the Quran demeans Christians and Jews, because it is a supplication Muslims make to Allah seventeen times a day to keep them from the path of “those with whom God is angry” and “those who have lost their way”. A Muslim might respond, “Surah 1 never mentions Jews or Christians.” He is practicing tawriya, because while Surah 1 does not mention Jews and Christians by name, but he knows full-well that the words “those” refer to Jews and Christians.

Another example would be when a Muslim responds to your greeting of “Merry Christmas!” He might say, “I wish you the best.” In your mind, you think he has returned a Christmas greeting. In actuality, he has expressed his wish for you to convert to Islam; he wishes the best for you which, in his view, is becoming a Muslim.

Kitman is characterized by someone telling only part of the truth. The most common example of this is when a Muslim says that jihad really refers to an internal, spiritual struggle. He is not telling “the truth, the whole truth, and nothing but the truth”, as witnesses are sworn to do in U.S. courts. Often, kitman results in a gross distortion of the truth. In the example given, the Quran uses jihadand its derivatives 59 times. Of those, only 16 (27%) could be considered “internal” with no object as the target of the struggle based on the context of the surah.

Another common form of kitman is to quote only the few peaceful passages from the Quran, knowing full-well that that passage was later abrogated by a more militant, contradictory verse. Here is an example:

“There is no compulsion in religion” (Surah 2:256) Early Medina

“Are they seeking a religion other than Allah’s, when every soul in the heavens and earth has submitted to Him, willingly or by compulsion?” (Surah 3:83 Later Medina)

“Permission to take up arms is hereby given to those who are attacked, because they have been wronged.” (Surah 22:39) Late Mecca

“When the sacred months are over, slay the idolaters wherever you find them. Arrest them, besiege them and lie in ambush everywhere for them.” (Surah 9:5) Late Medina

Muruna means using “flexibility” to blend in with the enemy or the surroundings. The justification for this kind of deception is a somewhat bizarre interpretation of Surah 2:106, which says, “If we abrogate a verse or cause it to be forgotten, We will replace it by a better one or similar.” Thus, Muslims may forget some of the commands in the Quran, as long as they are pursuing a better command. Muslims striving to advance Islam, therefore, can deviate from their Islamic laws in order to cause non-Muslims to lower their guard and place their trust in their Muslim counterpart.

At times, Muslims practice muruna in the same way a chameleon changes colors to avoid detection. Muslims will sometimes shave off their beards, wear western clothing, or even drink alcohol to blend in with non-Muslims. Nothing is more valuable these days to the Islamists than a blue-eyed Caucasian Muslim willing to engage in terrorism.

Another common way of using muruna is for a Muslim to marry a non-Muslim or to behave like a non-Muslim so their true agenda will not be suspected. The 9/11 hijackers visited strip clubs and bars during their off-times while taking classes in the U.S. to fly airplanes into the World Trade Center, the Pentagon, and the White House. Many Americans believe Hillary Clinton’s aide, Huma Abedin, married Jewish Congressman Anthony Weiner at least in part to burnish her security credentials so she could infiltrate the highest levels of the Administration.

The implications of these highly-honed tactics of deception for unassuming Western societies. Twenty years ago, psychologist Paul Ekman wrote an insightful book, “Telling Lies”, which demonstrated that people give off recognizable clues when they are practicing deceit. Their consciences cause them, involuntarily, to sweat or raise their voices or make other recognizable gestures. However, Dr. Ekman’s research was exclusively with people from Western cultures. Muslims, on the other hand, show no discernible signs when they are being deceitful because there is no feeling of guilt. In their minds they are doing exactly what Allah wants them to do to advance Islam. Because any Western person who has raised children knows almost intuitively when someone is lying, so they assume they can do that in all cases. Unfortunately, those same Western people can be easily duped by Islamic deceit because there are no tell-tale signs in the deceiver.

Hopefully, this article will be a wake-up call to the unsuspecting infidels. Trust but verify – as was an old American strategy in dealing with potentially hostile parties – is the way to go in dealing with Islamists.