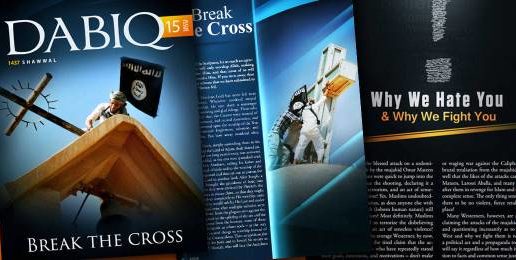 The Islamic State released the fifteenth issue of their English-language Jihadi magazine, Dabiq, this past week, titled “Break the Cross.”

In the first issue following the attacks in Orlando, Nice, Normandy, Wurzburg, and Ansbach, ISIS orders even more attacks to be launched without delay.

In an effort to delegitimize the politically correct narrative that Islam has nothing to do with ISIS, they repeatedly clarify that their message is: There is no God but Allah, who “is to be worshipped alone via love, hope, fear, supplication, prostration, sacrificial slaughter, etc.”

Further, ISIS lays out point by point why they hate us and why they fight us:

However, contrary to popular belief, they clarify that American foreign policy is not the sole, let alone main, reason that they attack us:

“The fact is, even if you were to stop bombing us, imprisoning us, torturing us, vilifying us, and usurping our lands, we would continue to hate you because our primary reason for hating you will not cease to exist until you embrace Islam.“

ISIS will not stop fighting until the West is willing to accept one of three options: conversion, submission by paying the jizyah (infidel tax), or death.

More than simply explaining why they fight us, this issue provides strategies on how best to bring down the West. For example, they suggest Muslim children learn infidel languages in order to spy on enemy communications or execute operations on infidel ground.

They also mention constructing a new language that would be used to “encrypt communication back and forth between [a jihadi] and the Islamic State foreign operations leadership before executing [an] attack against surveyed targets.”

As done in previous issues, Dabiq again stresses the importance of attacking the non-believer at home if you are not able to travel to the Islamic State, hitting the “Crusaders” where it hurts most, behind enemy lines, on their own territory. Finally, they give advice for future attacks, saying to keep their plans simple and effective, attacking as soon as possible.

The Islamic State further legitimizes their killing of civilians by arguing that every nation that claims to be ruled by the will of the people “has implicated their own populations in the crimes their militaries commit against the Muslim nation,” strengthening the Muslim obligation to target them.

This is a tactical deviation from previous issues, which placed a heavy emphasis on attacking U.S. law enforcement and military targets. ALL infidels are now a target, meaning that any large gathering of people — a sporting event, a movie theater, a mall — is  vulnerable, making the job of our law enforcement officers that much more difficult.

This report was originally posted at TheGorkaBriefing.com.