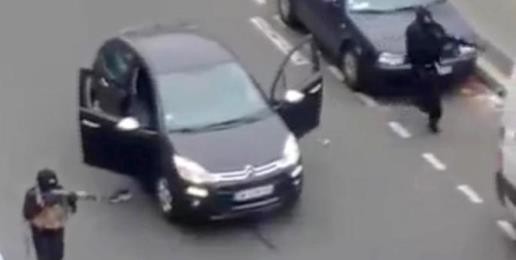 Experts: Islam Must Be Confronted, Not Coddled
01.13.15
PRINT

In the wake of Wednesday’s horrific murder of 12 people at a Paris newspaper office, liberals – including President Barack Obama – have once again refused to acknowledge that the attack was “Islamic terrorism.” Obama just referred to the attack as “terrorism” – which J. Christian Adams, a former Justice Department attorney, finds perplexing.

“The perpetrators say they’re doing it in the name of Islam,” Adams points out. “So you have to confront the Islamic component one way or another because the murderers themselves are saying that it is Islam and they’re muttering Islamic prayers as they’re doing the murders.

“So let’s figure out why Islam seems to be the trademark for so many murderers around the world.”

Adams, who now serves as legal editor for PJ Media, also finds it ridiculous that former Democratic National Committee chair Howard Dean said the Paris terrorist killers were not Muslim, but members of some kind of cult.

“Folks like Howard Dean and the president have a seriously difficult time identifying evil. I think they’re actually uncomfortable with the entire notion,” he suggests. “It’s [the terrorists themselves] who are saying I’m doing this in the name of Islam – it’s not conservatives accusing them of that. They’re confessing as they do these things, so obviously there’s a problem. How it gets resolved remains to be seen.”

Adams says the barbarians who believe they are acting consistent with Islamic teaching are a threat to civilization now and in the foreseeable future.

In the days before the attack in France, rallies were taking place in neighboring Germany by thousands of citizens frustrated with the way the Islamic influence has been allowed to grow in the country. While Chancellor Angela Merkel denounced the protests in her own country as “racist,” she described the Paris attack as “an attack against the values we all hold dear, values by which we stand, values of freedom of the press, freedom in general, and the dignity of man.”

National defense analyst Robert Maginnis believes the terrorist attack in Paris is just the latest example of why there is a growing backlash against the Islamisation of Europe. The senior fellow for national security at the Family Research Council points to a major undercurrent throughout Western Europe against the failure of the Muslim populations to integrate into the culture.

“So as a result you get these Islamic ghettos that are all over Western Europe that don’t allow the policemen [to come in], don’t use the language, don’t allow the culture – and there is a backlash,” he tells OneNewsNow. “It’s been brewing for the last two decades, and I think it’s intensifying even now.”

Maginnis admits he’s worried about the Islamic problem growing worse in the United States with Barack Obama in the White House for two more years.

Islam in America:
A Christian Response