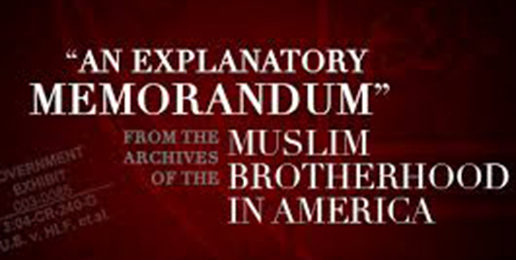 An Explanatory Memorandum: From the Archives of the Muslim Brotherhood in America
03.23.16
PRINT

We at the Center for Security Policy feel it is important for Americans to better understand– and, then, be able to successfully contend with– those that attempt to destroy or subvert our way of life. As making our nation’s enemies’ threat doctrines available is a key part of our educational efforts, we are pleased to present the blueprint for the Muslim Brotherhood in America, known as An Explanatory Memorandum: On the General Strategic Goal for the Group in North America or, in America’s largest terrorist prosecution in US federal court, Government Exhibit 003-0085 3:04-CR-240-G in U.S. v Holy Land Foundation, et al.

In August of 2004, an alert Maryland Transportation Authority Police officer observed a woman wearing traditional Islamic garb videotaping the support structures of the Chesapeake Bay Bridge, and conducted a traffic stop. The driver was Ismail Elbarasse and detained on an outstanding material witness warrant issued in Chicago in connection with fundraising for Hamas.The FBI’s Washington Field Office subsequently executed a search warrant on Elbarasse’s residence in Annandale, Virginia. In the basement of his home, a hidden sub-basement was found; it revealed over 80 banker boxes of the archives of the Muslim Brotherhood in North America. One of the most important of these documents made public to date was entered into evidence during the Holy Land Foundation trial. It amounted to the Muslim Brotherhood’s strategic plan for the United States and was entitled, “An Explanatory Memorandum: On the General Strategic Goal for the Group in North America.” The Explanatory Memorandum was written in 1991 by a member of the Board of Directors for the Muslim Brotherhood in North America and senior Hamas leader named Mohammed Akram. It had been approved by the Brotherhood’s Shura Council and Organizational Conference and was meant for internal review by the Brothers’ leadership in Egypt. It was certainly not intended for public consumption, particularly in the targeted society: the United States. For these reasons, the memo constitutes a Rosetta stone for the Muslim Brotherhood, its goals, modus operandi and infrastructure in America. It is arguably the single most important vehicle for understanding a secretive organization and should, therefore, be considered required reading for policy-makers and the public, alike.

Another extraordinarily important element of the Memorandum is its attachment. Under the heading “ A List of Our Organizations and Organizations of Our Friends,” Akram helpfully identified 29 groups as Muslim Brotherhood fronts. Many of them are even now, some twenty-two years later, still among the most prominent Muslim- American organizations in the United States. Worryingly, the senior representatives of these groups are routinely identified by U.S. officials as “leaders” of the Muslim community in this country, to be treated as “partners” in “countering violent extremism” and other outreach initiatives. Obviously, this list suggests such treatment translates into vehicles for deep penetration of the American government and civil society.

We urge the readers of this pamphlet to share it with others— family members, friends, business associates and most especially those in a position to help adopt policies that will secure our country against the threat posed by shariah and its most effective and aggressive promoters, the Muslim Brotherhood.

More about the Explanatory Memorandum (from Shariah: The Threat to America):

The following Muslim Brotherhood document was entered into evidence in the U.S. v Holy Land Foundation trial, and is a primary source threat document that provides new insights into global jihad organizations like the Muslim Brotherhood. These documents (covered extensively in chapter four) define the structure and outline of domestic jihad threat entities, associated non-governmental organizations and potential terrorist or insurgent support systems. The Memorandum also describes aspects of the global jihad’s strategic information warfare campaign and indications of its structure, reach and activities. It met evidentiary standards to be admissible as evidence in a Federal Court of law .

In the original document, the first 16 pages are in the original Arabic and the second are English translations of the same. It is dated May 22, 1991 and titled “ An Explanatory Memorandum on the General Strategic Goal for the Group in North America” (Memorandum). The document includes an Attachment 1 that contains “a list of our organizations and the organizations of our friends.”

The Memorandum expressly recognizes the Muslim Brotherhood (Ikhwan) as the controlling element of these organizations and expressly identifies the Muslim Brotherhood as the leadership element in implementing the strategic goals. The Memorandum is reproduced here in its official Federal Court translation, as Government Exhibit 003-0085 3:04-CR-240-G in U.S. v Holy Land Foundation, et al. with punctuation, line spacing and spelling intact.

From the Explanatory Memorandum— the Muslim Brotherhood in America in its own words:

“The process of settlement is a ‘Civilization-Jihadist Process’ with all the word means. The Ikhwan [Muslim Brotherhood] must understand that their work in America is a kind of grand jihad in eliminating and destroying the Western civilization from within and “sabotaging” its miserable house by their hands and the hands of the believers so that it is eliminated and God’s religion is made victorious over all other religions.”

This article was originally posted at CenterForSecurityPolicy.org