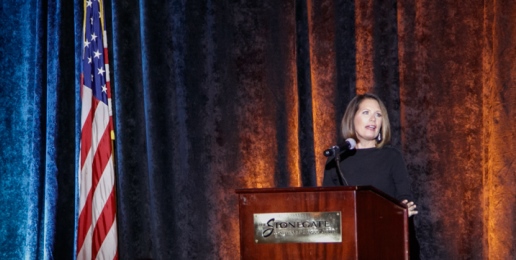 Former Minnesota U.S. Representative Michele Bachmann is a staunch pro-life and pro-family advocate, as well as a self-proclaimed “Constitutional Conservative.”

When Representative Bachmann delivered the keynote address at this fall’s Illinois Family Institute banquet, she noted that in just a few years we will celebrate the 400th anniversary of religious liberty arriving on this continent. In September 1620, 102 pilgrims set out from the old country with the goal of settling in a new land where they could live out their faith, free from persecution.

Bachmann’s speech reminded many in attendance why she was a contender during the 2012 presidential primary campaign. Her subject matter included both history and an impassioned summary of the Gospel message. She connected the work and trials of the pilgrim fathers to the grave threat to religious liberty that exists today.

At the outset, Bachmann emphasized the importance of the work of the Illinois Family Institute. She told the audience that since many people are too busy to do the much-needed work that IFI is doing, they should write a check equal to the value of the time they cannot give. Liberty has a cost, she said, and IFI needs the generous support of liberty-loving donors.

Too often, Bachmann pointed out, we can focus too much on the “horribles,” and be caught up in “gloom and doom” due to things happening at the national level that are “beyond appalling.”

She said that the truth is secure, however, as are the principles this nation was founded on. The problem is, as social conservatives know, that Americans “have lost the memory of what this magnificent society stands for and what it means…we’ve seen a non-stop assault on the truth.” 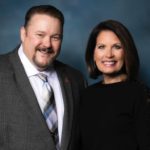 Bachmann then cited remarks made earlier in the evening by IFI’s executive director Dave Smith about the recently passed Illinois Senate Bill 1564, which requires that pro-life counselors and medical professionals to violate their conscience by telling patients about abortion. Bachmann said:

It is amazing to me that the law compels believers to say something they know isn’t true. Doctors, caregivers, people in pro-life centers — they’re forced, compelled, by a state entity, to share information that not only violates their moral conscience, but they know fundamentally, maybe even experientially in their own life — it is not only wrong — it will bring about death. And yet their government says they must say it.

For the first time since Roe v. Wade, Bachmann said, Illinois has passed into law pro-abortion legislation that violates religious liberty and the right of conscience.

“The very essence, the very spirit of the United States,” Bachmann went on to say, “didn’t begin with the Constitution — it didn’t begin with the Declaration of Independence.” Relating the story of the pilgrims in the early 1600s, she outlined the facts surrounding their search for a land where religious liberty would prevail. The Church of England, at the time, was exercising tyrannical powers in an attempt to shut down any disagreement with its own doctrines.

The pilgrims, she said, came to America “because they didn’t want to be compelled in speech or prohibited in speech.”

As we near the 400th anniversary of the pilgrims’ journey to the new country, religious liberty is threatened in the United States, Bachmann said, just as it was “in Germany in the 1930s.” We are seeing a repeat of history, as the Nazi government also told Christians and Christian churches what they can and cannot do.

We know from history, Bachmann noted, “what happens when truth is restricted in society.”

Even though religious liberty has existed since the pilgrims landed at Plymouth Rock, she said, that liberty will only be maintained if we speak the truth. Michele Bachmann said IFI needs the generous support of men and women committed to preserving religious liberty and speaking the truth. The Illinois Family Institute exists to tell the truth. 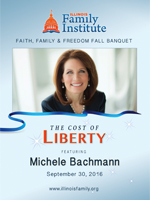 Get your DVD copy of Michele Bachmann’s IFI 2016 banquet presentation for any donation of $15 or more (includes shipping and handling).  Your donation will help fund the work and ministry of Illinois Family Institute.

Click the button below to donate. Once we receive the donation we will snail-mail you a copy (or multiple copies) of this DVD.

Michele Bachmann: The Cost of Liberty