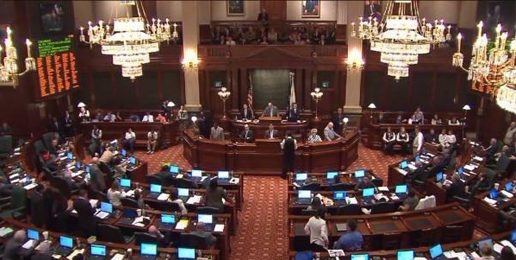 Illinois is morally, fiscally, and intellectually bankrupt, and you know what some lawmakers in swampy Springfield are doing with their time and taxpayers’ money? They’ve crafted a stunning resolution titled “Illinois Family Action-Hate Speech” (HJR 55) condemning Illinois Family Action (IFA) and Illinois Family Institute (IFI), falsely accusing us of bigotry and engaging in “hate speech” because in two articles we compared the abortion holocaust to the Nazi Holocaust.

The ten “progressive” sponsors of the resolution falsely accuse IFA of distributing “multiple anti-Semitic, homophobic, threatening, and hateful posts on their official social media page, callously belittling the most appalling tragedies of the Holocaust and recklessly comparing those who disagree with their extreme agenda to Nazis.”

Chicago attorney Joseph A. Morris, who is also a leader in B’nai B’rith and other Jewish and interfaith organizations, served from 1995 through 2001 as the President of B’nai B’rith in the Midwest, and was founder and first Chairman of the B’nai B’rith International Center for Public Policy, said this about the disputed analogy:

I’m Jewish, and not only am I not offended by the comparison between the German Nazi Party’s National Socialism and the U.S. Democratic Party’s Democratic Socialism but I think the comparison is accurate. Wise, principled, and humane Democrats should welcome having their attention arrested by the facts.

The bill’s sponsors filed this resolution just days after a crowd of 4,000 pro-life Illinoisans showed up in Springfield to urge their state senators and representatives to oppose the radical anti-life policies sponsored by these lawmakers and other “progressives”—an event singled out for criticism in the resolution.

Apparently, our anti-constitutionalists in Springfield have forgotten the First Amendment’s protection of speech, assembly, and the right to petition our government for redress of grievances, which is “the right to make a complaint to, or seek the assistance of, one’s government without fear of punishment or reprisals,”—you know, like hateful resolutions.

Since logic and evidence still matter to some Illinoisans—resolution-signatories excepted—let’s don our rhetorical hazmat suits and waders and trudge through the murky, fallacy-infested resolution.

The posts to which they refer are presumably one by Teri Paulson titled “Why is Legalized Abortion Called a Holocaust” and one by this writer titled “Leftist Hysteria and Their Language Rules” in which there is not one sentence that is anti-Semitic or that “callously belittles” the appalling horrors of the Holocaust. None of the sponsors has explained how comparing the egregious horrors of the slaughter of 61,000,000 humans in the womb to the egregious slaughter of 6,000,000 Jews and others in the Nazi Holocaust constitutes a callous belittlement of the Holocaust.

When asked whether he finds the analogy offensive, Orthodox Jew David Blatt said,

No. How is it any different? It baffles me that my liberal co-religionists endorse abortion-on-demand given the legacy of the Shoah.

Will the gang of ten in Springfield condemn Mr. Blatt as an anti-Semite?

The analogy is not reckless, nor is it new. Those who object to it do so because they have concluded that the product of conception between two humans is not a human created in the image and likeness of God and endowed by his or her Creator with certain unalienable rights, chief among them the right not to be exterminated. IFA and IFI reject the ontological and moral assumptions of “progressives” on incipient human life.

We reject the worldview that asserts that women have a moral right to have their offspring killed. We reject the worldview that asserts that mentally or physically imperfect humans are less worthy of life than their mental or physical “superiors.” Perhaps those who are enraged at IFA/IFI can explain how the pro-feticide philosophy regarding “defective” humans in the womb differs from the Nazi principle of  “life unworthy of life”?

Once again for the obtuse and/or demagogic “progressives” among us: no matter how many times you charge conservatives with “homophobia,” criticism of volitional homosexual acts or relationships does not constitute fear or hatred (i.e., “homophobia) of those who identify as homosexual. IFA and IFI hold theologically orthodox views of marriage and homosexual acts and relationships—views that are shared by the Catholic Church, the Orthodox Church, and many Protestant denominations. We have a constitutional right to express those views without being harassed, intimidated, and bullied by Springfield “progressives.”

IFA and IFI even have a right to quote, recite, and post what St. Paul says about homosexuality:

There’s really nothing to say other than neither of the “posts” that inflamed the resolution’s sponsors or any other posts written for IFA/IFI include any threats. We unequivocally denounce the use of violence. If the resolution sponsors cannot provide evidence to support that pernicious claim, they owe IFA/IFI an apology (Weather reports say it’s still hot in hell, so…).

The term “bigot” refers to a person who is “obstinately or intolerantly devoted to his or her own opinions and prejudices, especially one who regards or treats the members of a group (as a racial or ethnic group) with hatred and intolerance.”

The word “obstinacy” in the definition of “bigot” warrants some discussion. First, “obstinate,” according to the American Heritage Dictionary, connotes “unreasonable rigidity.” I would argue that conservative views on, for example, homosexuality are completely reasonable, and that conversely, liberal views are woefully unreasonable.

In order to determine whether a tenaciously held conviction reflects obstinacy requires an evaluation of the content of the belief and the justifications for that belief. For example, few would characterize the act of tenaciously holding the belief that female genital mutilation is wrong to be a manifestation of obstinacy or bigotry.

Moreover, “obstinate” cannot be severed from the other parts of the definition. Bigotry is the obstinate devotion to uninformed inclinations, especially ones that result in hatred of members of a particular group.

The key phrase for distinguishing between bigotry and moral conscience is that a bigot’s opinions are “uninformed,” and the bigot “regards or treats the members of a group… with hatred and intolerance.” Certainly, there are those in society who demonstrate this kind of behavior, but true Christ-followers do not treat anyone with hatred.

I would argue that the views of “progressives” on homosexuality are uninformed, while those of IFA/IFI employees are fully informed.

Tolerating, respecting, or loving people does not require affirming all their feelings, beliefs, or actions. Neither does it require withholding criticism of their beliefs or those actions impelled by their feelings and beliefs.

Resolution’s smelly red herring (or is it a non sequitur?)

The sponsors cite as part of the justification for their resolution the 2004 murder of an unarmed Capitol guard by a  schizophrenic young man who had stopped taking his meds and was hearing “voices and thought members of an underground society in Eastern Europe were controlling him” at the time of the murder as part of the justification for the resolution falsely accusing IFI and IFA of “hate speech and threats.”

Let’s see if we can make sense of this: Fourteen years ago, a schizophrenic man who was off his meds murdered an unarmed Capitol guard, so there should be a “formal investigation” into IFA’s/IFI’s non-existent “hate speech and threats,” and our lobbyists’ credentials should be revoked pending the outcome of the investigation.

Now we come to the resolution sponsors’ appeal to the Southern Poverty Law Center (SPLC) as some sort of arbiter of moral authority. Yes, that SPLC—the infamous “hate-group” tracker/real hate group—the one embroiled in yet another ethics scandal, the one that makes beaucoup bucks off “progressives” by labelling as “hate groups” any organization that holds theologically orthodox views of sexuality.

In contrast to the aforementioned wholly irrelevant Capitol shooting, the SPLC’s fake hate-groups list has been the actual cause of a shooting. In 2012, Floyd Corkins showed up at the offices of the theologically orthodox Family Research Council, intent on killing the staff. He shot and wounded a security guard who was able to stop him. Corkins said he was inspired to commit acts of violence by the SPLC’s hate-groups list.

Just wondering, does hurling epithets at IFA/IFI employees, falsely accusing them of issuing threats and of being anti-Semitic, homophobic, hateful, and bigoted constitute hate speech? Might it result in violence against us?

It’s a routinely issued diktat that one must never compare the Holocaust or Nazism to, well, anything. I respectfully disagree. Not all analogies that include Nazism, the Holocaust, or Hitler constitute reductio ad Hitlerum fallacies. Some analogies are, as Joseph Morris asserts, accurate.

If we’re permitted to revisit ideas as settled by science and commonsense as women don’t have penises or men can’t become pregnant, surely, we can revisit the arguable claim that there are no points of correspondence between the slaughter of humans in the womb and the Holocaust. And if there are points of correspondence, then surely we can revisit the unwritten law of “progressives” that no one may point them out.

Maybe, just maybe, “progressives” want to censor the comparison of the feticidal holocaust to the Nazi Holocaust because they fear it’s true. What if God wants us to see the abortion holocaust as analogous to the Nazi Holocaust? What if it’s Satan who wants to blind our eyes to the similarities and silence our tongues from identifying them? What if those lawmakers and citizens who react in anger (or tactical faux-anger) are doing the bidding of the father of lies? And what if  conservatives who buckle when “progressives” hurl epithets at them are “now seeking the approval of man” rather than that of God?”

Joliet Diocese Bishop Daniel Conlon requested that all churches in the diocese play a recorded message from him in which he said in part,

The state of Illinois is currently facing a crisis far greater than anything economic. It is truly a matter of life and death. Legislation is being considered in the Illinois General Assembly that would permit abortion anytime during pregnancy; right up to the moment of natural birth all nine months…. I need your help in convincing our elected officials that this proposed legislation is just plain wrong…. Dietrich Bonhoeffer, a courageous critic of Nazism wrote, “Silence in the face of evil is itself evil. God will not hold us guiltless. Not to speak, is to speak.”

In the eyes of “progressives” in Springfield, is Bishop Conlon guilty of anti-Semitism and callous belittlement of the appalling tragedies of the Holocaust for his implied comparison of the abortion holocaust to the Holocaust? Will they add his name to the resolution condemning “hate speech”?

This unsubstantiated, malignant resolution constitutes a reprehensible abuse of power by morally corrupt lawmakers to silence speech. Every decent lawmaker, especially those who value the lives of the unborn and the First Amendment, should vote against it.

Take ACTION: Click HERE to contact your state senator and representative to ask them to reject this dangerous resolution. Ask them to vote down HJR 55 and the unprecedented and tyrannical action being taken by extreme partisans in the Illinois General Assembly.