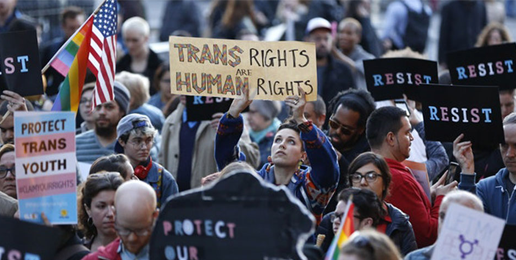 Get the popcorn ready because they don’t even see it coming — at least most of them don’t.

Gay and lesbian activists, along with their bisexual allies, are about to be clobbered. They’re about to be decked. But not by those enemy evangelicals they have long resented and demonized.

For decades the LGB’s have mastered the Saul Alinsky method in dealing with orthodox Christians and all those holding to traditional morality – “pick the target, freeze it, personalize it, and polarize it.” The bigot label has been applied to Bible believers with such precision that only a fool would confuse who has won the hearts and minds of the culture on the issue of sexuality.

No, the imminent blindside coming for LGBs won’t be originating from the religious boogeymen they’ve soundly defeated in the courtroom of public opinion. It will be coming from their fellow sexual revolutionaries – the Ts.

It has long been a political axiom that revolutionaries will eventually turn on one another. It’s the nature of a revolutionary after all. There’s always a new cause, a new victim, a new enemy. And while the vanquishing of the Bible bangers and street preachers have brought these wildly divergent sexual lobbies together to unite in a common cause, anyone paying attention can see what’s coming.

Take this video clip from the 2019 gay pride documentary, “Are You Proud?” and listen closely to what the transgender activist says at the very end.

In 2019 documentary about gay pride ‘Are You Proud?’ someone proposes that in future lesbians and gays shouldn’t exist. A far right politician? No, a trans activist. pic.twitter.com/I6866Q6Nv5

If you didn’t get all that, she says (quite presciently and logically I might add):

“It’s quite challenging to LGB people, because if gender is on a spectrum, then homosexuality doesn’t really exist cause it can only exist in a binary. So when it comes down to it, it’s really just two people, or maybe three, or whatever, loving each other. It has nothing to do with sexuality.”

If you listen closely, you can hear the transgender jackhammer busting a gaping hole in the foundation of everything this movement has claimed for the last three decades. The very nature of lesbianism, gayness, and bisexuality rests on the presupposition that there exists a so-called “gender binary.” That is, there are boys and there are girls.

Meanwhile, the entire premise of transgenderism is the belief that there is no “male” nor “female.” Instead, all beings exist on a sliding scale of gender identity, which makes any appeal to a male/female gender reality oppressive.

It’s kind of funny to think that not long ago gay crusaders were standing in solidarity with transgender culture warriors in demanding that society not “erase” trans identity. Seeking to erase lesbian and gay identity is a most peculiar way of saying “thank you,” it would seem.