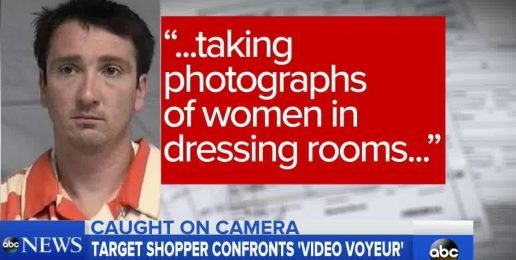 When Target announced its transgender-friendly restroom and fitting room policy in April, the American Family Association (AFA) almost immediately called for a boycott. (You can sign the petition here.) What alarmed us in particular was Target’s eagerness to allow grown men into dressing rooms that historically had been reserved for the exclusive use of the fairer sex.

While Target emphasized that its policy was just about transgenders, we immediately saw citizen videos in which grown men who were making no pretense to be women asked Target personnel if they were free to use whatever restroom or dressing room they chose, and they were enthusiastically told that of course they could.

This represented – and still does today since Target has not changed course – a dangerous loophole. Target is allowing any male to use a women’s dressing room if he simply self-identifies as a female, and even if he doesn’t. He is not required to show any evidence of his femaleness, whether with a driver’s license, a note from his doctor, or even his attire. His word is his bond. If he says he’s a woman trapped in a man’s body, Target will simply take his word for it, regardless of how obviously ridiculous the claim may be.

This is exceedingly irresponsible, as it exposes our wives, daughters, and granddaughters to invasion of privacy at a minimum and to sexual assault at the worst. Video voyeurism, we predicted, would increase, for the simple reason that any man can go into any dressing room or restroom he wishes without being challenged or even questioned by Target employees. Once he’s in, he’s in, and if he does something indecent while he’s in there, too bad. Thanks to Target, it’ll be too late for the victim. He might even wind up getting arrested, but the damage will have already been done.

At the time, we were told ad nauseam that we had nothing to fear from those who claim to be transgendered because no transgenders had ever abused their privileged access to little girls’ rooms. Well, that ruse has now been blown to bits.

Here is a case in point, which perfectly illustrates why the Target boycott must continue until Target management gets its collective mind right. In my home state of Idaho, police arrested a 46-year-old man who claims to be a transgender woman. His crime? Filming an 18-year girl as she tried on swimwear in a Target dressing room. His legal name is Sean Smith, even though he claims to be going by the name Shauna Smith. He used an iPhone to film the victim from an adjacent booth, simply by sticking the phone over the top of the divider.

Smith was attired in a dress and a blonde wig, either as an expression of his own sexual confusion or as a clumsy disguise to avert suspicion. But his mugshot makes it clear that he’s a male regardless of what he thinks he is.

During questioning by Bonneville County detectives, Smith admitted that he has done this thing repeatedly in the past. One investigator wrote, “[Smith] eventually admitted to me that she [sic] had made videos in the past of women undressing. The defendant told (the detective) that she [sic] makes these videos for the ‘same reason men go online to look at pornography.’”

Target will soon be releasing its second quarter financial statement, and the news will not be good. Shareholders have every reason to be restive about management risking their investment on a doomed-to-fail social experiment.

Perhaps shareholders can get the attention of Target’s CEO, since, at this point, he seems impervious to the voices of alarmed American families who are taking their shopping dollars to friendlier climes.

Bottom line: Target either needs to get a new dressing room policy or a new CEO. And the sooner the better.

This article was originally posted at AFA’s blog.