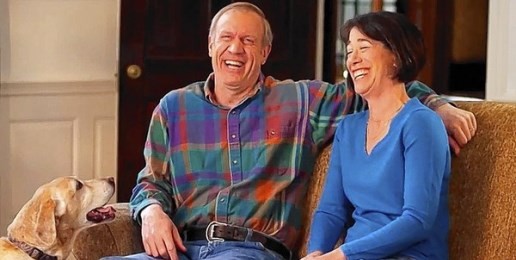 In a campaign ad, Mrs. Rauner stated with a Cheshire grin and a long nose that “Bruce doesn’t have a social agenda.”

Now minors who experience same-sex attraction as a result of sexual molestation will be prohibited from receiving counseling that may help them reject an unwanted, unchosen “gay identity.”

And minors who experience gender dysphoria will be prohibited from receiving counseling to help them accept as good their physical embodiment and to affirm a “gender identity” consonant with their objective, immutable biological sex. Even liberal sexuality and gender scientists Dr. Eric Vilain and Dr. J. Michael Bailey expressed their opposition to bans on so-called “conversion therapies” for gender dysphoric minors. I guess the powerful Wizard of Springfield knows something these experts don’t.

Or…he has a social agenda, and one that’s as colorful as Obama’s rainbow-dipped D.C. home.

If you still doubt Rauner’s social agenda, please note that he could have done nothing and the bill would have become law anyway.

Alternatively, he could have used his “amendatory veto power,” which only a few governors have and which he used recently with the marijuana law. Socially quiescent Bruce could have used this power to request the following changes which we sent him several days ago:

1.) Request that the bill be amended to prohibit only coercive aversion therapies.

2.) Request that the bill be amended to define specifically what constitutes aversion therapy.

3.) Request that a specific exemption be added to allow counselors to discuss the connection between childhood molestation and sexual orientation confusion and/or same-sex attraction. The liberal American Psychological Association admits the following:

Although much research has examined the possible genetic, hormonal, developmental, social, and cultural influences on sexual orientation, no findings have emerged that permit scientists to conclude that sexual orientation is determined by any particular factor or factors. Many think that nature and nurture both play complex roles….

Even homosexual counselors acknowledge that childhood molestation can result in “sexual orientation” confusion. Minors who have been sexually molested have a right to explore the link between their molestation and subsequent same-sex attraction.

4.) Request that the bill be amended to exclude gender dysphoria, “gender identity,” and “gender expression” from this bill. We have a very unusual definitional construct in Illinois law. The Illinois Human Rights Act specifically includes “gender identity” and “gender expression” under the rubric of “sexual orientation.” Because of this unusual legal definition, this bill would effectively ban any therapeutic modalities in which counselors help gender dysphoric minors accept their physical embodiment (i.e., their objective biological sex). Well-respected, liberal gender/sexuality scientists oppose bans on “conversion therapy” for gender dysphoric minors.

Governor Rauner could have done nothing or he could have used his amendatory veto power to request reasonable changes, but he didn’t because he has a pernicious social agenda that will undermine human flourishing.

Oh well, I guess in the big picture, what really matters are not the rights and welfare of minors and those who love them most. What really matters is that adult LGBTQQIP activists are sated and pensions are funded.