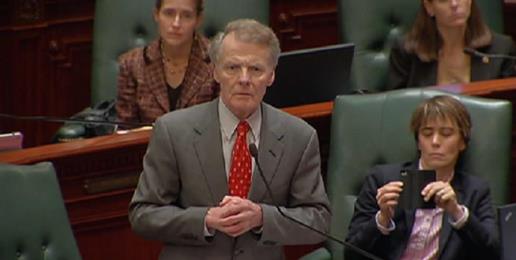 My random thoughts following the vote on marriage:

1.)  Tuesday, cowardly and/or ignorant Illinois lawmakers in defiance of truth, history, logic, compassion, and in some cases, their own religious traditions voted to legally recognize non-marital unions as marriages. In so doing, they have expanded the role of government in the lives of Americans, diminished religious liberty, rendered inevitable the legalization of plural unions, and harmed children in incalculable ways. They have given their stamp of approval on the practice of denying children’s inherent right to have both a mother and father. And they have assured that public schools will teach about sexual perversion in positive ways to children from kindergarten on up.

2.)  The voices of tolerance, truth, compassion, and love did not win. The voices of ignorance and the father of lies won. Here are emails I received from ardent supporters of genderless faux-marriage:

Robert Fracassa sent these three emails to me:

“How does it feel? Really bad? Imagine a lifetime of people as evil as you against birth of a child living in misery. No more!  Retire, all your work did nothing and means nothing!!! Marriage equality wins!!!!!!!!!!!!!!! Yayyyyyy, slam dunk in your face, freak!!!!

Homosexual activist Scott Rose  (aka Scott Rosenweig or Rosensweig) who writes for the New Civil Rights Movement and filed the challenge to University of Texas Professor Mark Regnerus’ important study of homosexual families, sent this email:

Ha ha!  Ha ha, Laurie.  You do still have the blood of gay-bashing victims dripping off of your bigot fingers, yet you live in a state where the gay people are going to have federal level equality.

Your life is a waste.

I think it would be a good idea for you now to kill yourself.

Go ahead and tell the public…that  I said that.

I could care less if the public knows that I said it would be a good idea for an anti-LGBT bigot to kill themselves.

Yes, I am gloating over your defeat.

Your life is a waste.

3.) Of course, this transmogrification of marriage has nothing whatsoever to do with equality, which demands that we treat like things alike. Homosexual unions and heterosexual marriage are not alike. They’re as different as night is from day and men are from women.

5.) Far too many Christians and their religious leaders were missing in action on this battle and have been for a very, very long time. Churches are not educating either their adult members or their youth on the issue of homosexuality in general and marriage in particular, and this dereliction of duty leaves Christians either confused or, worse, persuaded by the lies of the world.

Our children are growing up in a culture suffused with the poison of sexual perversity, the advocacy of which is propelled by the manipulation of their feelings and thoughts. Who will teach are children the flaws in the arguments proffered by progressives to normalize homosexuality and pervert marriage, if not the church? Most of their parents can’t critique and refute the specious secular arguments used by the Left. And teens aren’t spending their time reading First Things and Touchstone magazines or visiting the website Public Discourse.

So, where, pray tell, will kids be taught how to think through the plethora of fallacious messages with which the culture is slowly being poisoned? One of God’s many gifts in creating us in His image is that we enjoy the gift of reason. Rationality is not a sphere separate from the sacred.

6.)  Far too many religious leaders claim the church should not be involved in “political issues.” But what if political issues are first biblical issues? During the slave era, should churches have remained silent as Scripture was twisted to justify slave-holding (just as it is twisted today to justify same-sex pseudo-marriage)? Was it right that so many Christians refused to stand for truth during Hitler’s reign of terror? Should Christians have refrained from participating in the Civil Rights marches in the 1960’s?

7.)  Listening to the floor “debates” in Springfield, I was reminded of Neil Postman’s prophetic words in Amusing Ourselves to Death, in which he warns about our television-based culture losing its capacity to reason. Instead, appeals to emotion will rule.

The manipulative non-arguments in Springfield included reading a letter from a ten-year-old girl who, prior to being adopted by two homosexual men, had been in foster care. Two thoughts: First, adoption by a similarly compassionate mother and father would have been a better option. Second, the compassionate nurturance of these two men does not mean that their union constitutes a marriage. Although this is a perfect example of a manipulative appeal to emotion, it makes no sense as an argument. If five people of assorted sexes were to take this young girl in and fulfill all the responsibilities of a father and mother, their union would still not constitute a marriage.

8.)  It’s easy for the Left to vilify as hateful bigots people like me as long as there are only a handful of us around the country. If Christendom would come alive with the desire to protect children, preserve religious liberty, expose the deeds of darkness, and suffer for Christ, the Left would be unable to marginalize them all. The Left’s deliberate strategy of vilification and marginalization of those who serve as the tip of the spear works because the church slumbers—or hides. It’s easy to mock and demonize 100 people. It’s not so easy to malign 100,000.

9.)  What does the vote count really tell us in this heavily blue state in which the corrupt Democratic Party controls Springfield and in which House Speaker Mike Madigan for 10 years refused to allow a state constitutional amendment defining marriage as the union of one man and one woman even to have a hearing?  The speaker had to arm-twist members of his own party to get their votes on Tuesday. This close vote in this corrupt blue state may tell us that there are fewer Americans in love with this queer form of marriage than the press would have us believe.

Finally, thank you from the bottom of our weary but at peace hearts! Thank you to all who helped through emails and calls to and meetings with their state representatives, by attending marriage lobby days and pastors breakfasts, for financial support, for prayers, and for emails of support to us.

Thanks you to every state representative who through their votes defended true marriage, an act which is becoming a counter-cultural act of courage.

Thank you too for the emails we received Tuesday night thanking us and offering encouragement and eager support for the next step in our work to preserve liberty and protect children. Those were balms to our souls.

God’s work in this period of redemptive history is far from over. Teaching our youth; making it possible for parents to exit public schools; booting out foolish and cowardly lawmakers; awakening Christians, particularly clergy, who with the exception of a relatively small group, were largely and unconscionably absent; and alerting other states that will soon see their marriage laws attacked to the critical importance of every Christian speaking out boldly for truth are our next tasks.

In all things, we give thanks.