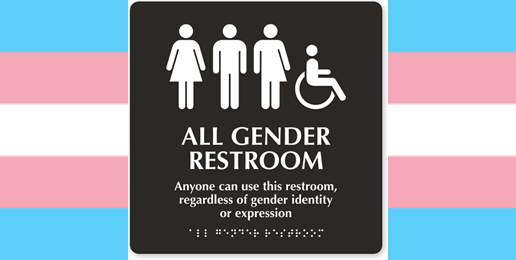 For those who find unpersuasive the warnings of conservatives about the cultural implications of “trans”-cultism, perhaps the words of “progressive” New York City father George Packer who experienced firsthand the effects in his children’s grade school of the totalitarian, anti-liberal “identity” dogma that now poisons America and wrote about them in an article for The Atlantic titled, “When the Culture War Comes for the Kids” will be more convincing:

The bathroom crisis hit our school the same year our son took the standardized tests. A girl in second grade had switched to using male pronouns, adopted the initial Q as a first name, and begun dressing in boys’ clothes. Q also used the boys’ bathroom, which led to problems with other boys. Q’s mother spoke to the principal, who, with her staff, looked for an answer. They could have met the very real needs of students like Q by creating a single-stall bathroom—the one in the second-floor clinic would have served the purpose. Instead, the school decided to get rid of boys’ and girls’ bathrooms altogether. If, as the city’s Department of Education now instructed, schools had to allow students to use the bathroom of their self-identified gender, then getting rid of the labels would clear away all the confusion around the bathroom question. A practical problem was solved in conformity with a new idea about identity.

Within two years, almost every bathroom in the school, from kindergarten through fifth grade, had become gender-neutral. Where signs had once said boys and girls, they now said students. Kids would be conditioned to the new norm at such a young age that they would become the first cohort in history for whom gender had nothing to do with whether they sat or stood to pee. All that biology entailed—curiosity, fear, shame, aggression, pubescence, the thing between the legs—was erased or wished away.

The school didn’t inform parents of this sudden end to an age-old custom, as if there were nothing to discuss. Parents only heard about it when children started arriving home desperate to get to the bathroom after holding it in all day. Girls told their parents mortifying stories of having a boy kick open their stall door. Boys described being afraid to use the urinals. Our son reported that his classmates, without any collective decision, had simply gone back to the old system, regardless of the new signage: Boys were using the former boys’ rooms, girls the former girls’ rooms. This return to the familiar was what politicians call a “commonsense solution.” It was also kind of heartbreaking. As children, they didn’t think to challenge the new adult rules, the new adult ideas of justice. Instead, they found a way around this difficulty that the grown-ups had introduced into their lives. It was a quiet plea to be left alone.

At times the new progressivism, for all its up-to-the-minuteness, carries a whiff of the 17th century, with heresy hunts and denunciations of sin and displays of self-mortification. The atmosphere of mental constriction in progressive milieus, the self-censorship and fear of public shaming, the intolerance of dissent—these are qualities of an illiberal politics…. It took me a long time to see that the new progressivism didn’t just carry my own politics further than I liked. It was actually hostile to principles without which I don’t believe democracy can survive.

But it’s not just conditioning of other people’s children that “trans”-cultists have in their sights. In a 2009 article in Travel and Leisure Magazine titled, “The World’s Ugliest Buildings,” the Portland Building in Portland, Oregon is called “one of the most hated buildings in America.” Well, that building likely just became a tad more hated—if that’s possible.

The 15-story municipal office building deemed an “icon of postmodernism” just entered the post-truth era through a $195 million renovation that includes the elimination of all urinals—thereby substantially increasing water usage costs—and turning the large, multi-stall single-sex bathrooms on the 1st, 3rd, and 15th floors into co-ed restrooms. If the single occupancy restroom on each of those floors is occupied, employees who don’t want to go to the bathroom in a stall next to an opposite-sex colleague doing the same will have to traipse to another floor to find some privacy and retain their dignity.

Tom Rinehart, Portland’s chief administrative officer, sent an email to all employees, proclaiming from his high horse, “I am convinced that this is the right way to ensure success as your employer” and “to remove arbitrary barriers in our community.”

Does Rinehart know what “arbitrary” means? “Arbitrary” means “determined by whim or impulse, not by reason or law.” Separate facilities in which biologically distinct humans—also known as men and women—engage in personal bodily functions is the antithesis of “arbitrary.” What the heck did he learn at the University of Notre Dame?

Such separate facilities are based on the incontrovertible, scientifically verifiable, immutable fact that the human species is sexually dimorphic and the truth that sexual dimorphism is the source of feelings of modesty and the desire for privacy on which sex-separate private spaces are based. If Rinehart thinks sex-separate private spaces are “arbitrary barriers,” then is he advocating for all restrooms, locker rooms, showers, shelters, semi-private hospital rooms, dorm rooms, nursing home rooms, jail cells, and prison cells to be sexually integrated?

Is it possible that Rinehart actually believes co-ed restrooms “ensure success”? If so, he may need to go back to business school.

For years, deceitful homosexual and “trans” activists sniffed under their sprouting snouts, “How will you be affected” by the “trans”-ideology and the addition of “gender identity” to anti-discrimination laws and policies? Some people provided answers to those questions. “Progressives” responded by howling “hater” back at them, and most conservatives responded with silence and blank stares. And now private spaces are being eradicated.

No one’s being affected no way, no how, nowhere. Yeah, right.