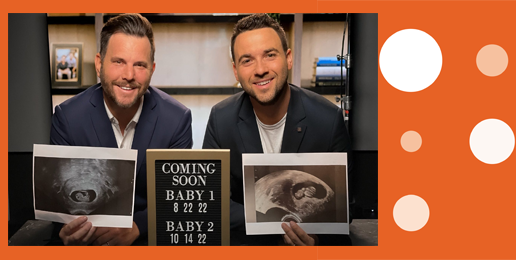 PragerU, Christopher Rufo, and Blaze TV publicly congratulated Dave Rubin and the man to whom he is legally married on the impending births of two babies via two surrogates. With friends like that, conservatives don’t need enemies.

They’re not alone. Matt Whitlock, senior advisor for communications and digital at the National Republican Senatorial Committee and volunteer faculty member at the Leadership Institute, which “teaches conservatives of all ages how to succeed in politics, government, and the media,” also congratulated Rubin.

And both Meghan McCain and Megyn Kelly enthusiastically congratulated Rubin and his faux-husband. That’s not surprising in that both women are long-time enthusiastic activists for the cause of normalizing homosexuality. While no one will be surprised by their “LGBTQ” “progressivism,” we should be troubled because McCain identifies as a Republican and “lifelong conservative,” and Kelly identifies as a Catholic. Conservatives ought not be indifferent to the presence of “LGBTQ” collaborators within the GOP or the church. They are corrupting both the Republican Party and the church from within.

How many leaders in the GOP, Republican members of Congress, or members of the pundit class who identify as conservative are willing to say that no one is entitled to a baby?

How many will say babies deserve and have a right to both a mother and a father, preferably the man and woman who produced them?

Who in the GOP will say that if two men (or women) reject true marriage in favor of a naturally—that is, by design—non-reproductive relationship, they should live with the consequences? Sodomy is not equivalent to sexually complementary intercourse. And by design, sodomitic mimicry of intercourse is non-reproductive. All efforts to mimic intercourse and to obtain the fruit of such unions–including shopping for eggs as Rubin shared he did–by homosexuals are morally repugnant and selfish.

While the desire to procreate is natural and good, it is unnatural and evil to reject the procreative act as ordained by God for marriage and then demand its fruits.

In describing his exit from the Democrat Party, Dave Rubin has in the past cited the intolerance of the left as his reason. With some true conservative Twitter commenters criticizing Rubin’s selfish pursuit of his own desires at the expense of the needs of the children he is acquiring, some leftists are suggesting that such criticism reveals the intolerance of conservatives. Evidently, they don’t understand the meaning of “tolerance” or the claims of conservatives.

First, tolerance refers to enduring or putting up with something one finds objectionable. Tolerance does not mean affirmation, approval, or celebration.

Second, membership in the GOP or in the kingdom of God necessarily entails holding principled convictions. Both groups hold principled views on what constitutes the good. They hold views on which acts should be prescribed or proscribed, tolerated or not tolerated, celebrated or denounced. While Christians and conservatives must forbear the expression of the view that homosexuals make “good parents,” we are entitled to say—and should say—that children need, want, and deserve a mother and father.

If all that were necessary and sufficient to make a good parent were the ability to love and provide materially for a child, then society should affirm sibling unions. And to be logically and morally consistent, anyone who celebrates the purchase of two babies by not-in-reality-married Dave Rubin should celebrate the purchase of babies by close-kin lovers.

Those who claim to be Republican or conservative and either celebrate Dave Rubin’s baby acquisitions or refuse to criticize his actions are harming the GOP, the conservative movement, the church, children, and America.

Cultural commentator Allie Beth Stuckey once said, “if conservatives aren’t willing to conserve the most fundamental fact of life—the reality of male and female—then we’re not conserving anything.” The same goes for the most fundamental natural institution: the nuclear family, central to which is a mother and father.

If conservatives don’t stand boldly and perseveringly for true marriage and the rights of children, choosing instead cowardly or foolish genuflection to Log Cabin Republicans and Republicans obsessed with fiscal matters, the GOP will become unworthy of support.