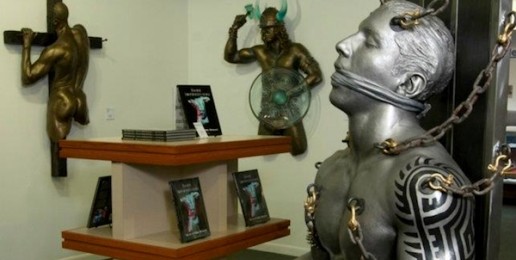 Peter LaBarbera of Americans for Truth About Homosexuality is drawing the attention of neighbors to “The Leather Archives & Museum” – described by the business itself as “a library, museum, and archives pertaining to Leather, fetishism, sadomasochism, and alternative sexual practices.”

“There are three schools within the radius of this sadomasochistic so-called museum – and it’s not really a museum, it’s a perversion center,” LaBarbera states. “A center that’s glorifying homosexual perversion of the most awful kind should not be anywhere near children or anywhere near schools.”

Churches also are located in the Rogers Park area – churches that LaBarbera believes would likely frown on what the center stands for.

“It glorifies the most heinous perversions, including pedophilia and incest,” he remarks. “And nobody knows what’s going on in there except the homosexual movement – and they try to keep it hidden.”

Volunteers with Americans for Truth About Homosexuality are handing out leaflets in the entire neighborhood, alerting residents to the operation and urging them to contact their aldermen to protest.