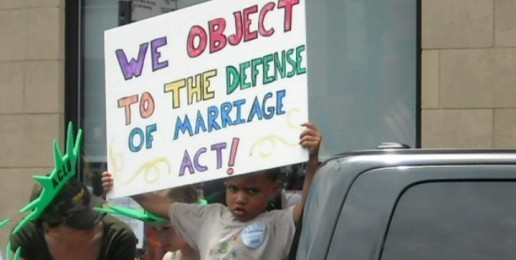 Today, May 30, 2012, the homosexual activist organization Lambda Legal and the ACLU of Illinois have filed two lawsuits against the clerk of Cook County, charging that his office’s refusal to issue marriage licenses to 25 homosexual couples violates the equal protection and due process clauses of the Illinois Constitution.

The fact that Illinois’ civil union law grants homosexual couples all the rights, privileges, and responsibilities of marriage means next to nothing to homosexual activists. As IFI and many others warned, civil union legislation was merely a stepping stone to legalized same-sex marriage.  “It’s now painfully obvious that the purpose for securing civil unions legislation last year was to gain legal leverage in the attempt to overturn the Illinois law that defines marriage as the union of one man and one woman,” said IFI’s executive director, David E. Smith.

The Illinois Family Institute’s cultural analyst Laurie Higgins states that “Homosexual activists and their ideological allies will exploit any means to achieve their goal of eradicating moral disapproval of homosexuality, including censorship, propaganda, demagoguery, slander, and judicial activism.”

The means they are now using in Illinois are those they used to legalize same-sex marriage in Iowa. Homosexual activists have announced they are bypassing the will of the people as reflected in their elected representatives. According to the Chicago Tribune’s cheerleader for the homosexuality-affirming movement, Rex Huppke, “[John] Knight, the ACLU attorney, said that he is confident same-sex marriage rights can be won through the state’s judicial system and that there is no reason to wait for lawmakers to act.”

Governor Pat Quinn (D) and Cook County Clerk David Orr (D) have both stated publicly that they believe same-sex marriage should be legalized.  While apparently believing that the criterion of numbers of partners is essential, they believe that sexual complementarity is irrelevant to marriage.

Let’s hope and pray our judges are wiser.