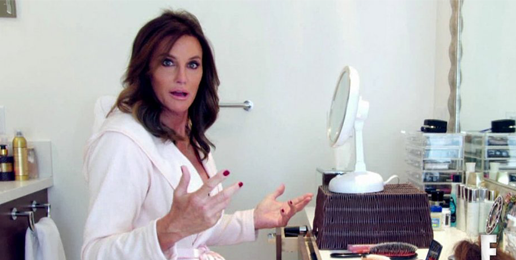 With the kids home for Thanksgiving we were watching a movie and during one of the commercial breaks, a cosmetic company promoted its products with a slick, high-gloss advertisement. Inserted with the burst of dramatic head shots showing beautiful young women wearing lipstick, rouge and eyeliner was a quick shot of a man doing the same.

Because it passed so quickly, it took a second to register and I asked, “Was that a guy?” My daughter responded with, “Yeah. I don’t know why you have to make such a big deal about it.”

That moment was instructive for a couple of reasons. First, when I asked my daughter if she was okay with a man wearing make-up, she said that that’s just the way the world is, and wonders why I’m surprised.

She has a point. We’ve been force-fed the LGBTQ+ agenda for years, and it’s seeped into every conceivable corner of life. The rapid collapse of historical sexual norms since Obergefell has felt like a dam giving way under the weight of the floodwaters behind it, unleashing a swollen cascade that submerges everything in its path.

Transsexuals now grace the covers of lifestyle magazines that cater to women. They displace women and girls in competitive sports. Drag queens read to children at libraries across the country. Starting in kindergarten, the next generations of children are being taught that what was once considered perverted and shameful is to be affirmed and celebrated.

Businesses adopt policies and practices that provide benefits to same-sex couples. They aspire to achieve a “100” rating from the Human Rights Campaign Corporate Equality Index, billed as “the national benchmarking tool on corporate policies and practices pertinent to lesbian, gay, bisexual, transgender and queer employees.”

Why should I be surprised that this is the world we live in now?

But I am surprised and that leads me to the second reason it was an instructive moment. The fact that my daughter didn’t react with aversion tells me that men wearing make-up has become normalized at a much faster rate than I expected.

Do we really need to be reminded that biological males cannot be female? Men in make-up are play-acting—they’re pretending to be women (and mostly ugly women, at that).

I won’t. I won’t, first and foremost, because it denies God’s created order. He “created mankind in his own image, in the image of God he created them; male and female he created them.” (Gen. 1:27) I realize that most, perhaps even all, transsexuals don’t believe that. But I do and so does God and I won’t compromise my convictions.

I also won’t do it because it is irrational and I won’t betray logic or common sense to accommodate their absurdities. It makes me an accessory to their delusions and makes them codependents in a dysfunctional relationship. I’m not playing that game.

And I won’t do it because I was born at the end of the baby boom after World War II. I am part of a passing generation that held to traditional cultural norms, rational beliefs and American patriotism. It may be that my generation is one of the last to escape the full indoctrination of the decades-long “march through the institutions” of Western—specifically, American—civilization developed by Italian political theorist Antonio Gramsci more than 80 years ago. I won’t be party to the overthrow of that civilization.

Unfortunately the church has not escaped the boots of cultural Marxism marching through its sanctuaries, either. As Jude told his original readers, “certain individuals whose condemnation was written about long ago have secretly slipped in among you. They are ungodly people, who pervert the grace of our God into a license for immorality and deny Jesus Christ our only Sovereign and Lord.” (verse 4)

Instead of holding firm to scriptural teaching, some church leaders have sought to accommodate the alphabet mob in the cause of “winning the lost.” Just love everyone always, they say. They’ve lost their nerve to stand against the popular demands of the world and have compromised their faith. In their compassion they have forgotten that even Jesus declared that he did not come to bring peace on earth, but division. (Luke 12:51)

The church needs to regain its courage, stand for righteousness, and let God sort out the winners and losers. Parents need to take charge of their children and pull them out of public schools. Business owners need to take hits to their bottom line. Employees need to risk getting fired for refusing to toe the line on the Human Rights Campaign’s index.

When a man shows up in a cosmetics commercial peddling the latest beauty products, I express surprise, yes, but also revulsion and dismay over what our society has become. It’s getting late and we are likely past the point of no return. But we don’t need to succumb without resistance to the end.