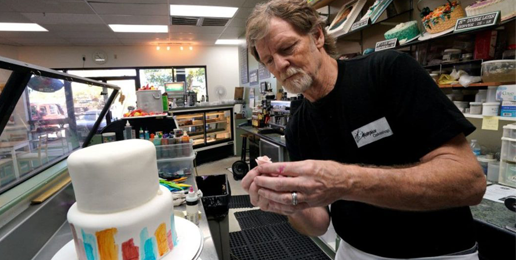 Male Attorney Who Pretends to Be a Woman Goes After Jack Phillips
Written By Laurie Higgins   |   08.15.18
PRINT

What the heck is wrong with Denver attorney “Autumn” Charlie Scardina? Oh yeah, he’s delusional. He thinks he is or wants to be a woman. And he definitely masquerades as one. That’s not an excuse for his reprehensible act of going after Masterpiece Cakeshop baker Jack Phillips, but it may help explain it.

In June 2017, just after the U.S. Supreme Court agreed to take Phillips’ case regarding his refusal to bake a cake for a same-sex faux-marriage and in full knowledge that Phillips would refuse his request, Scardina called the bakery to try to order a cake with a blue exterior and a pink interior for the celebration of his futile quest to become a woman—something he erroneously calls a “transition.”

As Scardina knew he would, Phillips refused, so Scardina filed a complaint with the loathsome Colorado Civil Rights Commission, which has “issued a finding” in which it declares that “there is sufficient evidence to support” Scardina’s “claim of discrimination.”

And we’re off to the races. “Autumn” may find running in heels challenging.

Phillips did not “discriminate” against Scardina based on Scardina’s desire to be a woman or his choice to masquerade as one. Phillips refused to use his skills and labor to create a product he has never created and that would convey a message that violates his religious convictions. If Scardina, still adorned in all his inglorious fakery, were to request a cake to celebrate, for example, his parents’ anniversary, Phillips would create it and sell it to him. Why is the distinction between refusing to sell a type of product or refusing to create an offensive message or refusing to serve a type of event and refusing to serve persons so difficult for cultural regressives to understand?

A word about “transitioning.” Men and women don’t and can’t. Castrations on anatomically and biologically healthy men don’t turn them into women. They turn them into eunuchs. Inverting penises to turn into fake vaginas doesn’t turn men into women. Tracheal shaves, feminizing facial surgeries, cross-sex hormone-doping, and evening gowns don’t turn men into women. Sure, with multiple surgeries, lipstick, flowing hair, and elaborate costuming, men can create disguises more likely to deceive people, but they cannot transition from man to woman.

This effort to destroy the small business of a Christian baker who seeks nothing other than to live his life as an authentic Christ-follower is revolutionary. Many dark forces impel and sustain this science-denying madness. There is the sexual revolution that ushered in the notions that our bodies are only instruments for our pleasure; that bodies have no intrinsic teleology (and certainly not related to procreative potential); and that there are no absolute, transcendent, objective moral truths. Second-wave feminists taught that there are no substantive differences between men and women (well, except when they argued there are, and women are superior). Then came the “LGBTQ” revolution that taught us the lie that men and women are interchangeable when it comes to sexual partners. The old heresy of Gnosticism reared its ugly head. Gnosticism teaches that the human person is dualistic rather than an integrated, inseparable whole composed of body and soul. Add to this toxic stew the cowardice of Christians who should know, care about, and speak truth but now stand largely silent while the bodies of men, women, and children are being mutilated in Frankensteinian and futile experiments, and voilà, a revolution of historic proportions is upon us.

At the most fundamental level, this revolution constitutes rebellion against God and his created order. It’s yet another manifestation of man’s pursuit of disordered desires, including the desire to be like God, which are the desires that get humans into mess after mess. Some messes, however, are worse than others. This is among the worst.

And cultural regressives will brook no resistance. They demand that every man, woman, and child genuflect to all cultural manifestations of their madness. In our schools, in our leisure activities, in our language, in our restrooms and locker rooms, and one day in our churches, we will be made to pretend that men can become women—or else. Live and let live is definitely not their motto.

Remember the concerted effort to force Jack Phillips to bake multiple cakes with unholy, deceitful messages next time some cultural regressive scoffs at the suggestion that Christians are being persecuted. Remember this next time some cultural regressive says the “lgbtqqap” ideology affects only the persons who embrace it. Remember this next time an opportunity presents itself for you to speak truth and, instead, you feel like God is “leading” you to remain silent.

Isn’t it remarkable how often we Christians feel “led by God” onto the path of least resistance—you know, the same path everyone else is on—the wide, crowded path lit by thin strands of those tiny, bedazzling lights that illumine little?