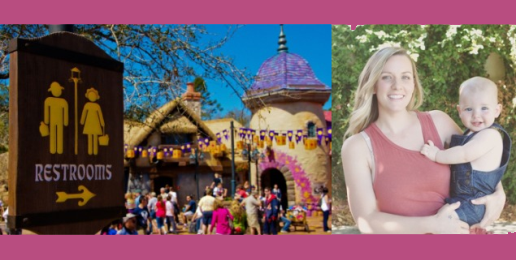 Leftists smugly ask what they perceive to be THE “gotcha” question about trannies in restrooms: “So, are we going to have genital police?” To those smugsters, I ask, “How will you determine whether the burly, bearded, bulging-biceped person in the women’s restroom or locker room is a member of the “trans” cult or a predator pretending to be a member of the “trans” cult?”

Please read this short blog post from liberal California mom Kristen Quintrall whose eyes were (partially) opened by an experience in the women’s restroom at Disneyland:

I didn’t know if I was going to write this blog or not. A part of me was scared it’d be shared as some transgender hot piece about yet another homophobic mom lashing out at Disney and then I’d have to deal with the wrath of the internet telling me to kill myself. So let me be clear. This isn’t that story. This is a story about a biological man in the women’s restroom.

I’ve lived in Los Angeles for over a decade and have seen my fair share of transgender/gender fluid people. They in no way offend me. I’d consider myself pretty progressive and tolerant of most things….But how transgender people feel, how they choose to dress or any surgeries they get, don’t infringe on any parts of my life, so I support their decision to live as they see fit. I’ve also seen my fair share of transgender women in the women’s restroom before. Not ALL the time. But over the past few years, I’d say 4-5 that I noticed. Men…who were in some stage of transition and making every attempt to be a woman from mascara to heels. Transgenders who certainly felt comfortable in the women’s room and probably frightened to go into the men’s. At these times, I smiled…I peed…and life went on. But 2 weeks ago something very different happened.

I was at Disneyland with my son, my friend and her son. We were over in California Adventure in the food court area. We’d just finished eating and decided to pee before we headed out to The Little Mermaid. I went to the bathroom while she watched our boys in their strollers, and then I did the same….

I was off to the side waiting with the two boys, when I noticed a man walk into the restroom. My first thought was “Oh sh*t, he’s walked in the wrong restroom by mistake. lol” He took a few more steps, at which point he would’ve definitely noticed all the women lined up and still kept walking. My next thought was, “Maybe he’s looking for his wife…or child and they’ve been in here a while.” But he didn’t call out any names or look around. He just stood off to the side and leaned up against the wall. At this point I’m like, “WTF? Ok there is definitely a very manly hispanic man in a Lakers jersey who just walked in here. Am I the only one seeing this?” I surveyed the room and saw roughly 12 women, children in tow…staring at him with the exact same look on their faces. Everyone was visibly uncomfortable. We were all trading looks and motioning our eyes over to him…like “what is he doing in here?” Yet every single one of us was silent. And this is the reason I wrote this blog.

If this had been 5 years ago, you bet you’re a*s every woman in there would’ve been like, “Ummm what are you doing in here?”, but in 2017? the mood has shifted. We had been culturally bullied into silenced. Women were mid-changing their baby’s diapers on the changing tables and I could see them shifting to block his view. But they remained silent. I stayed silent. We all did. Every woman who exited a stall and immediately zeroed right in on him…said nothing. And why? B/c I…and I’m sure all the others were scared of that “what if”. What if I say something and he says he “identifies as a woman” and then I come off as the intolerant a*shole….? So we all stood there, shifting in our uncomfortableness…trading looks. I saw two women leave the line with their children. Still nothing was said. An older lady said to me out loud, “What is he doing in here?” I’m ashamed to admit I silently shrugged and mouthed, “I don’t know.” She immediately walked out…from a bathroom she had every right to use without fear.

So there lingered this unspoken doubt everyone had….that .00001% chance this wasn’t a man. Let me be clear. This was totally a man. If this wasn’t a man, this was a woman who had fully transitioned via surgery and hormones into a man and had also gotten an adam’s apple implant, chest hair and size 9-10 shoes ….and at that point, wtf are you doing in the women’s restroom?

And let me be clear, my problem wasn’t JUST that there was a man in the restroom. Its that he wasn’t even peeing, washing his hands or doing anything else that you’d do in a restroom. He was just standing off to the side looking smug…untouchable… doing absolutely nothing. He had to of noticed that every woman in the long line was staring at him. He didn’t care. He then did a lap around the restroom walking by all the stalls. You know, the stalls that have 1 inch gaps by all the doors hinges so you can most definitely see everyone with their pants around their ankles…..

So here I am…writing this blog, because honestly I need answers. We can’t leave this situation ambiguous any more. The gender debate needs to be addressed….and quickly. There have to be guidelines. It can’t just be a feeling. I’m sorry. I wish it could, but it can’t. I’m fine going by “if it looks like a duck, quacks like a duck…it’s a duck.”…But this notion that we’re shamed into silence b/c we might offend someone, has gone too far.

There was a man in the bathroom. Not transgender. There was a man who felt entitled to be in the woman restroom, because he knew no one would say anything. There were 20-25 people by the time I left, who were scared and uncomfortable by his ominous presence. And the only thing stopping us, was our fear of political correctness and that the media has told us we don’t know what gender is anymore. I never want to be in the position again. Im not asking for permission to tell transgender people to get out my bathroom. I need to know it’s ok to tell a man, who looks like a man, to get the f*ck out. Gender just can’t be a feeling. There has to be science to it. DNA, genitals, amount of Sephora make up on your face, pick your poison, but as a very progressive woman…I’m sorry it can’t just be a feeling when theres but a mere suggestion of a door with a peep hole separating your eyes from my vagina or my children’s genitals.

I commend Quintrall for her courage and partial insight, but she doesn’t see the intellectual and moral incoherence that yet animate her new position.

She says this man wasn’t transgender. He was a “biological male.” She says there “has to be science to it.” Well, science tells us that the sex of persons can never change. Men who identify as “trans” remain always biological males. So, the man who through castration and cross-sex hormone-doping looks like a woman and talks like a woman remains forever a man. And women should be no more comfortable with the frock-wearing, Sephora-painted man sashaying past women doing their business in stalls than they would be if a construction worker in Carhartts lumbered past the stall door.

Objective sex either matters in private spaces or doesn’t matter. And if it doesn’t matter—if biological sex has no intrinsic meaning—we should eradicate all single-sex contexts everywhere. That would include restrooms, dressing rooms, locker rooms, showers, saunas, steam rooms, and semi-private hospital rooms.

Quintrall suggests that if this man-appearing person were actually a fully-“transitioned” “transman” (i.e., a woman), she should be using the men’s restroom. Wrong. Women cannot become men, and no women—not even women in disguise—belong in men’s restrooms.

And this brings us to the thorny problem of where these confused people should go to do their private business. Not to be unkind, but that’s a problem of their own creation. With regard to restrooms, most places of public accommodation have single-occupancy family restrooms that fully-disguised men and women can use. With regard to locker rooms, they’re out of luck. They should change and shower at home.

The ignorant among us do not yet know that the “gender” eradication movement believes that “identifying” as the opposite sex requires nothing more than a verbal assertion. No diagnosis, no cross-dressing, no cross-sex hormone-doping, no surgery needed. Don’t misunderstand me. None of those can transmute men into women or vice versa. Unfortunately, I hear even from some purported conservatives that they’re fine with men who wish they were women using women’s restrooms as long as they’ve been castrated. But such a statement implies that the only issue with trannies in private spaces is the risk of physical predation in the form of peeping or assault. It’s not.

The central issue is the meaning of objective, immutable biological sex.