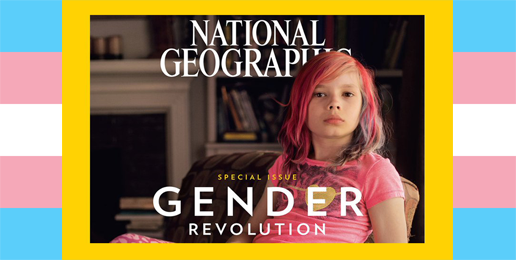 Avery Jackson, a 9 yr-old transgender victim, was featured on the cover of National Geographic in 2016.
It Turns Out Transgender Ideology Is Pretty Unpopular
06.13.22
PRINT

A study released earlier this year found that 43 percent of adults between the ages of 20 and 65 say that children and teens with gender dysphoria should not be subjected to puberty-blockers, cross-sex hormones, and so-called “sex reassignment” surgery. However, a more recent study asked a slightly different question. This study asked if people believed that transgenderism is a healthy condition and whether they were willing to say so publicly. 64 percent said that it was not a healthy condition, but only 30 percent were willing to say so publicly. Seventy-eight percent were opposed to children being encouraged to undergo gender transition. Similarly, 63 percent of American adults were opposed to redefining sex to include “gender identity.”

The majority of children who struggle with gender dysphoria become comfortable with their bodies by the time they reach adulthood if they do not undergo social or medical “transition.” “Transitioning” a child signs him up for a lifetime of invasive medical interventions that come with serious, lifelong consequences.

Because God’s Word accurately describes his world, we know that the biblical view of gender and sexuality is the truth and that our bodies follow that design. This means that what God has to say about sexuality and our bodies is true not just for believers but for everyone, and that the transgender movement’s insistence that a person can be “born in the wrong body” or that mutilating surgeries and hormone “treatments” will help people become their “true selves” is always harmful.

As Christians, we are called to seek justice, love mercy, and walk humbly before God. When it comes to the issue of sexuality and gender identity this includes seeking justice by refusing to allow harmful experimentation on children, loving mercy by showing genuine compassion for those who are struggling with gender dysphoria, and humbly submitting to God’s created design for our bodies.

Our bodies matter because they are more than just shells that our “true selves” reside in. As Christopher West puts it,

Through the profound unity of your body and your soul your body reveals or ‘makes visible’ the invisible reality of your spiritual soul. The ‘you’ that you are is not just something you ‘have’ or ‘own’ alongside yourself… Your body is you.

The rise in the number of American adults who believe that so-called “gender transition” for minors is a good thing is concerning and reveals a culture that has lost sight of foundational truths about human sexuality, as well as our obligation to treasure and protect children.

At the same time, it’s important to recognize that the transgender agenda is not as popular as activists would have us believe. Research indicates that the majority of Americans still believe that it is wrong to subject a child to so-called “gender transition.” Popular opinion does not determine whether something is right or wrong, but it is important to point out when a radical position that is being privileged in mainstream narratives actually represents an extreme fringe rather than the majority.

Adults have a responsibility to prioritize children’s needs and well-being. Subjecting children to irreversible “treatments” in an effort to change their bodies is harmful, and many Americans still recognize this, even if they are afraid to say so in public.

It is discouraging and troubling when people are unable or unwilling to say what a woman is. It is easy to stay silent when there is an entire month celebrating a radical sexual agenda and we are constantly being told that everyone else agrees. But not only is this agenda far less popular than we are led to believe, it is and always will be harmful because it is at odds with God’s good design. Parades and marches—even surgical intervention—will never change that.