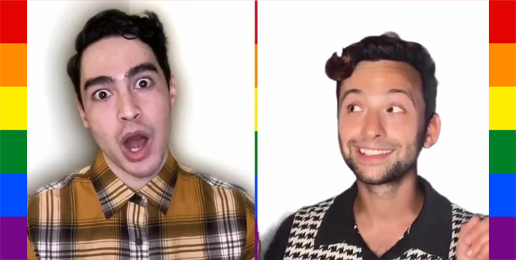 Last week, the San Francisco Gay Men’s Chorus (SFGMC) released a video on YouTube that has garnered widespread and justifiable condemnation for their admission that “LGBT” activists seek to convert your children. It begins with a smugly delivered introduction by Troy Iwata who says,

To those of you out there who are still working against equal rights, we’ve a message for you.

By “equal rights,” Iwata evidently means the unilateral right to impose the anarchical sexual beliefs of the “LGBTQ” community on the entire nation while censoring all dissenting beliefs. If, however, he is referring solely to the legal right to have intrinsically non-marital same-sex unions recognized as marriages, they’ve got that. (Oddly, homosexual social justice warriors are not griping about the denial of the “equal rights” of kin-lovers to marry—at least, not yet.)

Here’s the musical message from Iwata, Daniel Quadrino, and scores of homosexuals:

You think we’re sinful, you fight against our rights, you say we all lead lives you can’t respect.

You think that we’ll corrupt your kids if our agenda goes unchecked.

Funny, just this once, you’re correct.

quietly and subtlety and you will barely notice it.

You can keep them from disco, warn about San Francisco,

We’ll convert your children. We’ll make them tolerant and fair.

At first, I didn’t get why you’d be so scared of us turning your children into accepting, caring people, but I see now why you’d have a problem with that.

Just like you worried they’ll change their group of friends, you won’t approve of where they go at night—to protest.

Or when you’ll be disgusted—”so gross”—when they start learning things online that you kept far from their sight—like information.

We’ll convert your children.  Yes, we will!

Reaching one and all, there’s really no escaping it, cause even grandma likes RuPaul.

And the world’s getting kinder, Gen Z’s gayer than Grindr.

Learn to love, learn to vote, face your fate.

We’ll convert your children, someone’s got to teach them not to hate.

Your children will care about fairness and justice for others.

Your children will work to convert all their sisters and brothers.

Then soon we’re almost certain, your kids will start converting you.

The gay agenda is coming home.

The gay agenda is here. …

Get on board in a hurry, cuz the world always needs a bit more pride.

Pridefully proclaiming their goal to transform the moral beliefs of other people’s children is how homosexual activists demonstrate their respect, compassion, tolerance, and commitment to diversity. Mocking the worry of parents about the effects of a toxic sexual culture on their children’s beliefs–including religious beliefs–is how homosexual activists show their “love.”

Of course, they dishonestly recast their presumptuous efforts to “convert” the beliefs of other people’s children as an attempt to “turn” them into “accepting, caring,” “kinder” people, which assumes—but does not prove—that moral objections to homoerotic acts are lacking in compassion. True compassion and real love, though, depend on knowing what is true.

If homosexual acts are, in reality, objectively immoral, if they mar the image of God imprinted on men and women, if such acts degrade the human body, then it is neither caring nor kind to affirm such acts. The SFGMC does not even attempt to prove that volitional homosexual acts are moral acts—nor could they do so even if they tried. Homosexual activists demand and expect everyone in society to just accept their sexuality dogma.

The idea that authentic identity is constituted by unchosen, powerful, seemingly intractable feelings is an arguable assumption. The belief that acting on all unchosen, powerful, seemingly intractable sexual feelings is necessary for fulfillment is not only arguable but also dangerous. If the unproven assumptions of “LGB” and “T” activists are applied consistently, then all of society will be expected to “accept” all forms of sexually deviant behavior.

The SFGMC blames “manipulation from anti-LGBTQ media figures” for the intense backlash against their project, claiming that the video was done “tongue-in-cheek.” Online supporters of the video suggest that objections demonstrate what ignorant rubes conservatives are in that they can’t recognize satire. When sexual regressives can’t make an argument, they resort to mockery and name-calling.

While references to pleated pants and discos are tongue-in-cheek allusions, their claims that homosexual activists seek to convert children’s disapproval of homosexuality to approval are genuine.

Their tacit claim that moral disapproval of homosexual acts and relationships constitutes hatred and injustice is not a tongue-in-cheek claim.

Their hope to use other people’s children to “convert” their parents’ moral beliefs is not a tongue-in-cheek hope.

Their proclamation that they are coming for the hearts and minds of other people’s children is not a tongue-in-cheek proclamation. If you think it is, you haven’t been paying attention to what’s going on in government schools for the last three decades.

The SFGMC isn’t saying anything new. They’ve just converted longstanding and pernicious “LGBTQ” plans into a prideful anthem. Daniel Villarreal admitted those same goals a decade ago on the website Queerty:

We want educators to teach future generations of children to accept queer sexuality. … Recruiting children? You bet we are. …

The younger generation doesn’t fear homosexuality as much because they’re exposed to fags on TV, online, and at school. And I don’t know a single lesbian, gay, bisexual, or transgender person who wants that to stop. I for one certainly want tons of school children to learn that it’s OK to be gay, that people of the same sex should be allowed to legally marry each other, and that anyone can kiss a person of the same sex without feeling like a freak. And I would very much like for many of these young boys to grow up and start f*cking men. I want lots of young ladies to develop into young women who voraciously munch box. I want this just as badly as many parents want their own kids to grow up and rub urinary tracts together to trade proteins and forcefully excrete a baby.

I and a lot of other people want to indoctrinate, recruit, teach, and expose children to queer sexuality AND THERE’S NOTHING WRONG WITH THAT. Hell, our opponents even do the same. … [N]ot educating our kids about queer issues makes them ignorant, hateful little morons.

Iwata apparently doesn’t know any of the people he accuses of working to deny “rights,” because what conservatives are working against is the unchallenged promulgation of a set of arguable assumptions about the ontology and morality of volitional homoerotic acts, and the teleology of sex and marriage, particularly in government schools.

If homosexual desire is not biologically determined—and there is no scientific evidence that it is—then, it is likely that environment—i.e., nurture—contributes to its development. Don’t be duped by the mockers who claim it’s absurd to think ideas about homoeroticism can create feelings. Ideas can create feelings that then shape actions. By allowing young children to be exposed year after year to homosexuality-affirming ideas, parents are playing with fire—the fire of sexual desire ripped from its moral moorings.

In the book Male Colors: The Construction of Male Homosexuality in Tokugawa Japan, Gary Leupp demonstrates the effect of culture in constructing homoerotic desire:

Nanshoku [male homoeroticism] … arose largely to compensate for men’s lack of female companionship, but at some point, its culture came so to influence the structure of male desire that its vitality no longer required the absence of women. Indeed, it remained a vigorous tradition in Tokugawa [Tokugawa period: 1603-1868] cities even as the institution of the female courtesan throve. … The iro [sexual desire] of most Tokugawa men was bisexual.

This eros was specifically constructed to mirror the hierarchical relations specified in Confucian thought and in feudal society; males were socialized to desire to penetrate younger males and to be penetrated by older males.

Anyone who believes homoerotic desire cannot be constructed or created by culture is naïve or ignorant. Homosexual activists know this, and they are coming for your children’s hearts, minds, and bodies.