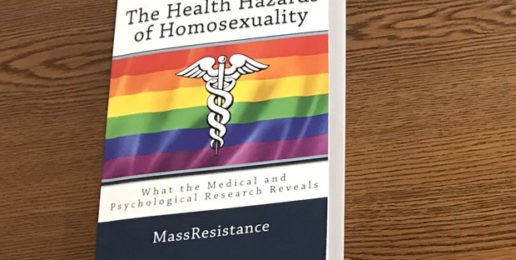 The Health Hazards of Homosexuality: An Important New Book from MassResistance (Part 1)
Written By John Biver   |   04.28.17


Charles Dickens famously opened his novel A Tale of Two Cities with the words, “It was the best of times, it was the worst of times.” Those words came to my mind as I clawed my way through the new book by MassResistance, The Health Hazards of Homosexuality. The book is as important as it is difficult to get through. It is the best resource I’ve seen on one of the worst topics in the modern public square.

Here is the book’s subtitle: “What the Medical and Psychological Research Reveals.”

If you’re unfamiliar with the organization MassResistance, you should get familiar. It is one of those small but hard-hitting and effective groups that fear nothing. Sometimes it’s the smaller teams of activists that accomplish the more difficult tasks — and MassResistance long ago earned the respect of many across the country and around the world for their boldness and tenacity.

“MassResistance is a pro-family activist organization that educates people to help them confront the attacks on the traditional family, children, religion, and society,” its website states and then asks “What makes us different?”

Boston Herald columnist Howie Carr once described us as a “hardcore pro-family group.” Through uncompromising first-hand reporting we expose the agendas and horrors targeting children in schools and the institutions of society. We provide analysis so the average person understands what’s really happening. And we give citizens and activists everywhere the tools and strategy to effectively confront the anti-family forces against them. Most people are unfortunately ill equipped to deal with this on their own.

In contrast, rather than being truthful and confrontational, too many pro-family groups are more interested in being viewed as “reasonable and “not extreme.” They tend to “fight” by writing commentary, re-posting shocking articles, and putting up a polite opposition to the latest left-wing lunacy. And they don’t accomplish much.

But MassResistance focuses on exposing the often harsh truth — and fighting back without compromise. We welcome people from everywhere who are willing to be part of this counter-revolution.

Brian Camenker, MassResistance’s executive director, penned the Forward to the book and opens it also with a question: “What makes this book different?” His answer: “It is a unique resource on an ‘untouchable’ subject.” And it is an awful subject:

A disproportionate incidence of pathologies is found among homosexual men, lesbians, and bisexuals. Yet the general public is told very little, if anything, about the baneful nature of homosexuality and its associated addictions and behaviors. The popular culture tells us, “Look the other way; there’s nothing to see here.”

There is an enormous volume of information available, but it’s widely dispersed and often hard to find. We spent several years collecting and organizing it. This book provides detailed discussion of homosexual lifestyle issues, sexual practices, and their medical and psychological consequences. We include background information and historical context which may be new to many readers.

And what are their sources? Brian Camenker lists them — most of which are pro-LGBT politically: The U.S. Centers of Disease Control and Prevention (CDC), the American Psychological and Psychiatric Associations, the Gay & Lesbian Medical Association, the Fenway Institute in Boston, various other LGBT-friendly clinical guides, and numerous research studies.

The Preface outlines the “why” of the book:

This book aims to alert the public — especially young people and their parents — on the serious physical and psychological health dangers inherent in adopting a “gay,” lesbian, or bisexual (GLB) identity.

An important quote from psychologist Joseph Nicolosi sums up the sad reality:

Most medical groups have embraced the homosexual agenda and are advocating that lifestyle despite all the scientific studies and medical evidence that demonstrates medical and psychological risk. Homosexual activism and political correctness are clearly trumping science.

“The mainstreaming of homosexuality is a serious threat to the public health,” the book states, and the “American public is not being told how dangerous homosexuality is to the physical and mental health of its practitioners.”

Said another way: “Greater societal acceptance of homosexuality has resulted in even more disease and suffering.”

If someone was to have witnessed me reading major parts of the book they would have assumed I was a speed reader. I am not. Some of the information included in the book is not easy to get through. And as important as it is to have the ugly realities included, I can always revisit those pages later should I need to know more about things such as “felching.” No, you don’t want to Google it.

So why am I recommending a book filled with such disgusting things? Because we have to deal with the world as it is — even as extreme cultural leftists work almost nonstop to hide critical facts from the public.

Up next — a few things I learned by reading this excellent book.