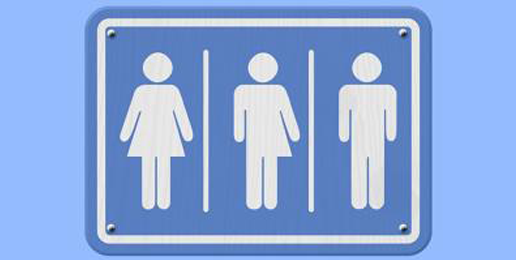 Has the Absurdity of Transgenderism Started to Awaken the West?
09.26.19
PRINT

On an ordinary day I would have regarded what Indiana State Attorney General Curtis Hill did as an aberration, a stroke of common sense in a society waging war against it. Hill refused to enact a policy change made by the Bureau of Motor Vehicles that would have created a new “Gender X” option for state drivers’ licenses.

It seems to be Hill’s view that not requiring the official government license to hold official, factual information rather than the desires or wishes of the carrier is a bad idea. He has a point, of course. As others have pointed out, should the carrier be allowed to decide what eye color, hair color, weight and height they wish they had and list that? If so, what’s the point of the document in the first place?

But that’s not the way we think anymore in the West. That’s why I would have been tempted to regard Hill’s refusal to bow the knee to the mob of inmates that now runs our cultural asylum as an isolated act of courage. But signs continue to emerge that perhaps the transgender madness has pushed a bit too far and society is starting to push back.

For instance, it was just days ago that avowed leftist Piers Morgan tweeted this: 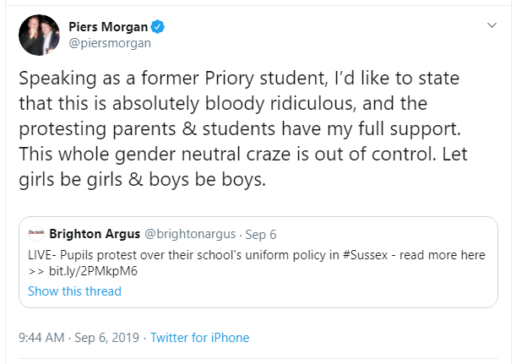 His remarks were in reference to the group of over 100 parents and students who protested the new “gender neutral” uniforms at an English school.  Morgan and company are not alone.

On this side of the Atlantic, Madeleine Kearns says there’s a rising tide of opposition to this latest manifestation of progressive liberalism’s sexual revolution:

Selina Soule, [is] the brave young athlete from Connecticut who, along with two other girls, has filed a Title IX complaint with the Education Department, which is now investigating the state’s policy allowing boys to thrash them in sports.

Back in March, 60 students (again, mostly girls) at Abraham Lincoln High School in Iowa staged a walkout after a boy was allowed to use the girls’ restrooms. Holding signs reading, for example, “We deserve our privacy,” as well as showing stick-figure images of a man and a woman found on bathroom doors, the young protestors chanted slogans such as “One over all is not fair.” Making the same complaint, students at Boyertown Area High School in Pennsylvania filed an appeal with the Supreme Court, though in May the Court declined to hear the case.

Kearns goes on to report that even the radical progressive feminist group called the Women’s Liberation Front that has spoken out recently on behalf of a funeral home that dismissed a male employee for his refusal to wear male clothing.  The WLF issued this remarkably lucid statement on the case:

“Simply, Aimee Stephens is a man. He wanted to wear a skirt while at work, and his ‘gender identity’ argument is an ideology that dictates that people who wear skirts must be women, precisely the type of sex stereotyping forbidden by [ruling legal precedent].”

There’s something oddly satisfying about seeing two groups typically skeptical (if not downright hostile) towards conservative or traditional morality – young people and feminists – suddenly come to the realization that the right may have been, well, right.

The “T” of the LGBT movement is the capstone on the upending of sexual sanity. It brings into focus the insanity that we have come to embrace in the name of personal identity. While the L, G, and B have all represented a distinct and overt rebellion to God’s moral order, the T highlights the final resting place of such rebellion: the denial of reality.

Could it be that this is the beginning of Western society noticing that? Only time will tell.

This article was originally published at TheResurgent.com.