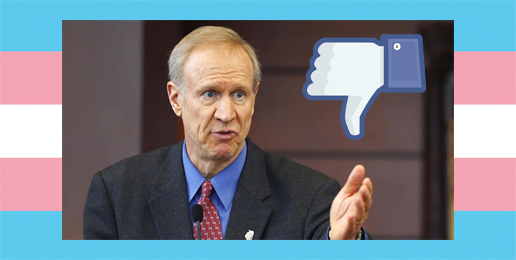 Left-leaning Governor Bruce Rauner just signed HB 1785 into law, making it even easier than it already is for men and women who pretend to be the opposite sex to acquire falsified birth certificates. HB 1785 passed the Illinois House by a vote of 63-32 on May 25th and was then passed in the Illinois Senate by a vote of 32-22 on the last regular day of session, May 31st.

Gender-pretenders can now acquire birth certificates that falsely identify them as the sex they are not and that falsely state that this identification happened at birth, which it did not.

In signing this absurd and culturally destructive Leftist bill into law, Rauner has reaffirmed what many Illinoisans already know: He doesn’t care about even profoundly important cultural issues that are not directly fiscal matters. In so doing, he also reveals his ignorance.

For decades Illinois has allowed men and women who impersonate the opposite sex to obtain falsified birth certificates by offering proof that they had had surgery—surgery that actually did not change their sex. But now, thanks to “Republican” Governor Rauner, those who renounce their biological sex will be allowed to acquire falsified birth certificates based on nothing more than the word of a mental health “professional” that they’ve been “appropriately” treated. This is both an ethical and political outrage.

Birth certificates are legal and historical documents that record an event that took place at a moment in time. They document the sex of humans as identified by doctors at the moment of their births. With the rare exception of those persons born with intersex disorders, birth certificates accurately record the sex of humans which never changes. Doctors do not assign or impose “genders” on newborns. Doctors identify their sex—which, again, never changes.

In the science-denying cultic world that biological-sex rejecters are creating, “birth certificates” are error-ridden, manipulable documents that record the whimsical guesses of authoritarian doctors who prognosticate and then impose “socially constructed arbitrary behaviors, conventions, and expectations” (i.e., “gender” as defined by Leftists) on newborns.

And Rauner has bought these absurdist notions hook, line, and sinker.

Or has he? Does he really believe such absurd notions or does he just not care enough about science, history, legal ethics, and the meaning of objective, immutable biological sex to take a stand?

Either way, his actions signify how foolish he is. This is just one more incremental step in the march toward the eradication of public recognition of sex differences everywhere for everyone, which Rauner seems to view as a public good.

Prayerfully consider how you can support
the work and ministry of IFI through a donation.