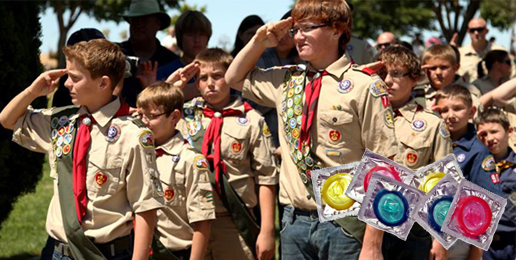 The Boy Scouts of America continue to earn negative headlines across the country.

Fast upon the heels of its decision to allow girls, openly homosexual boys and scout leaders, and children suffering from Gender Dysphoria into their ranks, they have now earned this headline from the Florida Family Policy Council (FFPC):

“Boy Scout” Policy Requires Condoms to be “Readily and Easily Accessible to All Participants” and Makes Exceptions for Alcohol Consumption at World Jamboree Scouting Event.

The World Organization of the Scout Movement (WOSM) is the world’s largest scouting organization and it holds a “World Jamboree” every four years. The Boy Scouts of America (which is in the process of being renamed as the Scouting BSA) participates in this event. The WOSM has released its health and safety guidelines for the World Jamboree that starts in late July in West Virginia. Since the Boy Scouts are the hosting organization, they will be required to:

“… ensure that condoms are readily and easily accessible for all participants and IST [staff] at a number of locations on the site. Heads of Contingent must be informed in advance and made aware of their responsibility in communicating this policy to their Participants, Unit Leaders, Contingent Staff, and IST in an appropriate way.”

That is not the only disturbing guideline. According to the Florida Family Policy Council:

Stunningly, the World Jamboree Guideline 7.3 also has “exceptions,” allowances and instructions for the consumption of alcohol in “confined areas” at the 12-day camping event….

“In light of the mandatory condom policy, it is not clear how far down the rabbit hole the Boy Scouts will continue to fall. With the addition of condoms and alcohol, the World Jamboree is starting to sound more like a 1960s Woodstock festival rather than a campout that parents would want to send their children to! All of this should be deeply disturbing to the churches that are chartering Boy Scout Troops. These policies present a clear youth protection problem that the BSA absolutely refuses to recognize. The fact that they are requiring that condoms be ‘readily accessible’ and are communicating this to everyone– including youth participants–shows that the BSA is both anticipating and facilitating sexual conduct between minors at this event. These policies are both outrageous and completely irresponsible.”

Note: The WOSM guidelines issued for this year’s jamboree were written in 2016.

Take ACTION:  Click HERE to send an email to the chairman of the Boy Scouts of America, the Chairman of the 2019 World Scout Jamboree and others who are planning this event. Let them know that the Boy Scout’s moral compass is leading them astray.