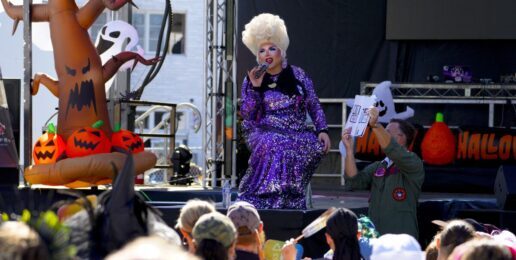 Halloween: the favorite holiday of men who cross-dress, wear woman-face, and like to hang around young children. And in San Diego they did just that. The San Diego Union-Tribune (U-T) reported on the “first-ever Boo Bash,” which included, “candy, a kid’s costume contest,” and, fittingly, “a Disney-villain themed drag queen performance.” Drag queens are villainous—that is, depraved—and Disney is now America’s premier purveyor of depravity to children.

The sorry spectacle was held in San Diego’s homosexual/cross-dressing neighborhood mecca of Hillcrest, inside Pride Square, on—I kid you not—Normal Street, under a “giant, billowing rainbow flag.” The U-T describes the bash as “special” because it “brought together members of the LGBTQ community and allies” to celebrate Halloween in an “inclusive environment.” What’s worse, the event was promoted by the Encinitas Union School District through an all-district email.

To leftists “inclusive” doesn’t mean “all are welcome to attend.” Their version of “inclusivity” requires affirming and celebrating all the feelings, beliefs, and actions of leftists—and only leftists.

Historically, commitments to inclusivity never demanded approval or celebration of all the beliefs, desires, and actions of others—which logically would be impossible.

While we should accept and welcome people, we can disagree with their beliefs, find their desires disordered, and detest some of their volitional acts.

Leftists exclude and even detest anyone who believes differently on sexual matters than they—leftists—do. Members of the “LGBTQ+” community and their ideological allies want to cancel anyone who dares to speak truths leftists hate with as much boldness as sexual libertines speak their “truths.” Sexual libertines want to exclude conservatives from the workplace—from all workplaces. They want conservatives excluded, marginalized, cancelled, stigmatized, and unable to make a living.

San Diego’s demonic Halloween “celebration” was created by TransFamily Support Services and sponsored by an over-21 “gay” bar in San Diego and a San Francisco clinic whose mission is to “align body and mind” by mutilating bodies—for profit, of course.

It’s astonishing that drag—a pitiable, fringe-y, grotesque, and unfunny form of pseudo-art, engaged in by sexual fetishists—would become mainstream for children. If children manage to escape the treacherous waters of the womb, American society will betray them in childhood through indoctrination with pro-homosexual and pro-“trans” beliefs (and practices).

Among those traitors to children at the event were State Senator Toni Atkins (D-San Diego), San Diego Mayor Todd Gloria, and County Board of Supervisors Chair Nathan Fletcher who expressed “support for transgender youth and their families,” which means approving of their sexual delusions and whatever damaging medical protocols they choose.

U-T reported that, “In the afternoon, drag queen Mariam T sat on stage in a sparkly purple evening gown to read ‘Red: A Crayon’s Story,’ to the audience. The book is about being true to yourself and following your own path despite obstacles.”

Drag queen “Mariam T” is Remington Scott Kienbusch a 30-year-old homosexual man whose favorite activities are “rhinestoning everything he wears” and going to Disneyland “any chance he gets.” 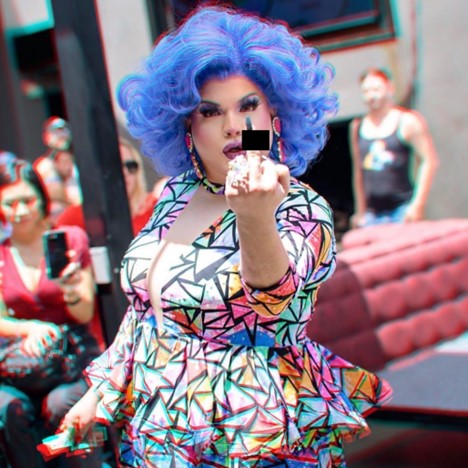 What if “being true to” oneself means following Christ despite the obstacles the “LGBTQ+” community and their bootlicking leftist government leaders toss in one’s path. Will “trans”-supporters Atkins, Gloria, and Fletcher support Christians as they are true to themselves? Or will they follow Governor Gavin Newsom‘s lead?

Newsom has decided to throw a boulder in the path of conservative people of faith who want to serve their communities as police officers. In September, Newsom signed into law a bill that amends a reasonable existing law which requires police officers to be free from any “emotional or mental condition that might adversely affect the exercise of the powers of a peace officer.”

The unreasonable amendment requires that police officers be evaluated for “bias” based on “sexual orientation.” Christians, Jews, and Muslims who believe homosexual acts are not moral may no longer serve as policewomen and policemen in California.

And now there’s a new bill pending that, if passed, will establish a “Commission on Peace Officer Standards and Training (POST) to set minimum standards for the recruitment and training of peace officers.” Further, it “authorizes POST to suspend or revoke the certification of a peace officer if the person has” demonstrated “bias on the basis of … gender identity or expression … [or] sexual orientation.”

The commission “shall develop guidance for local law enforcement departments on performing effective Internet and social media screenings of officer applicants” to root out “potential biases,” either “implicit or explicit.”

Everyone knows what “bias” on the basis of gender identity, gender expression, and sexual orientation means in the deceitful mouths of leftists. It means moral disapproval of cross-sex impersonation, cross-dressing, and homosexuality—disapproval that for many derives from their religion.

Therefore, Newsom and his collaborators seek to pass a law that demonstrates bias on the basis of religion, which violates the First Amendment prohibition of the free exercise of religion.

As criminal activity soars, Newsom has decided to reduce the number of good candidates to serve as police officers. Newsom does not care about public safety, public order, or the public good. He cares about pandering to any group that will help him retain power.

These are yet more reasons to hightail it out of California.