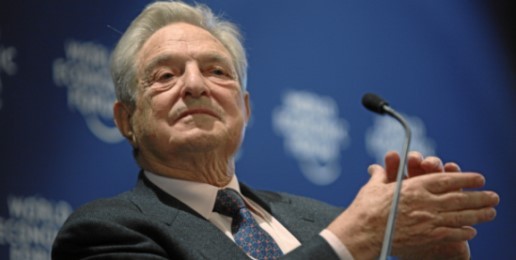 George Soros has been blamed by the pro-Russia crowd for sparking the anti-communist revolution in Ukraine. That was never the case, since Soros funded a small and largely ineffective non-governmental organization in Ukraine, the Renaissance Foundation. Now, a major Soros-funded group has come out with its prescription for resolving the crisis—accepting Russia’s demand that the country stay out of NATO.

NATO is hardly the anti-communist alliance it once was, but it still remains the largest pro-American group of nations on earth. That’s why the Russians hate it so much.

Ahead of the scheduled elections on May 25, the International Crisis Group (ICG) has just released a report saying Ukrainian leaders should “declare that they do not desire NATO membership.” The ICG receives a significant amount of funding from Soros’s Open Society Institute, and Soros sits on its board.

This follows former Secretary of State Henry Kissinger’s statements on CNN’s “Fareed Zakaria GPS” show on May 11, during which he argued that Putin should be accommodated in his drive to take over Ukraine. Kissinger said the West should agree to keep Ukraine out of NATO. Kissinger, whose firm does business in Russia, says Ukraine “will be free to participate in European economic relationships, but not join NATO.”

The global elites have clearly decided that Ukraine must be sacrificed in the name of protecting the big businesses investing in Putin’s Russia.

Not surprisingly, the ICG/Kissinger position is essentially the same as the one held by Russia. The Moscow-funded propaganda channel RT features Russian Foreign Minister Sergey Lavrov as saying, “The seeds for the current crisis were sown in 2008 in April during the NATO summit in Bucharest, when NATO leaders stated in a declaration that Georgia and Ukraine would be in NATO.”

But the “seeds” never sprouted and Putin invaded Ukraine anyway.

It was in 2008 that Russia invaded Georgia, taking over two regions, South Ossetia and Abkhazia. NATO’s April 2008 Bucharest Summit had declared, “We agreed today that these countries [Georgia and Ukraine] will become members of NATO.”

Today, however, Georgia still remains an “aspirant” for NATO membership. While Ukraine was also a candidate to join NATO, this never took place, either, with the blame falling on both the George W. Bush and Barack Obama administrations.

Republicans like to forget that Bush was fooled by Putin, saying about the Russian leader in 2001, “I looked the man in the eye. I found him to be very straight forward and trustworthy and we had a very good dialog. I was able to get a sense of his soul.”

Bush thought Putin would be an ally of the U.S. after the 9/11 terrorist attacks.

Based on what Soros, Kissinger and the others are saying, Russia’s invasion of Ukraine and takeover of Crimea, and control over the Black Sea and its strategic waterways will be left in place. The pro-Russian website Global Research notes, “the union of Crimea with Russia redefines the geopolitical chessboard in the Black Sea Basin.”

The liberal betrayal of Ukraine is something to behold and has taken place in only a few months. “Ukraine is something of a miracle,” Soros declared in an April 7 column. “A group of unarmed citizens rose up and overwhelmed a police force with orders to shoot to kill them. We are witnessing the birth of a new nation, a new Ukraine—with a limitless future made possible by people willing to sacrifice their lives for their country.”

The rhetoric sounded good. But now, these citizens are supposed to abandon their anti-communist vision of being free of Soviet/Russian control. Perhaps the Russians will restore the Lenin statues that the Ukrainians have toppled in dozens of cities.

Raising the white flag of surrender, Soros told The New York Review of Books that Western leaders “cannot prevent or reverse the annexation of Crimea. They are bound to protest it, of course, because it violates the Budapest Memorandum of 1994 that guaranteed the territorial integrity of Ukraine, including Crimea, but they are not in a position to oppose it by military means.”

So Russia’s violation of international law should be excused. This seems like a strange position for the liberals to take, since they traditionally favor the power of global institutions to enforce international treaties.

What’s more, there’s no evidence that giving Crimea to Russia will end the Putin regime’s campaign to destabilize the rest of Ukraine.

“The United States and the West are not in a position to go to war over the crisis in Ukraine and Crimea, nor should they,” says the Soros-funded Center for American Progress. The best steps forward, the group argues, are “to diffuse the situation” and “proactively shape trends and expand possibilities.” This gibberish means doing nothing of a military nature.

Obama himself said recently that neither Ukraine nor Georgia “are currently on a path to NATO membership and there has not been any immediate plans for expansion of NATO’s membership.” This is appeasement of Russia, pure and simple.

Meanwhile, American taxpayers are sending financial assistance to Ukraine, in the form of around $1 billion in loan guarantees, which may inevitably flow back to Russia as payments for gas. The International Monetary Fund, partly financed by the U.S., is sending billions more.

The Ukraine aid bill passed the Senate by a voice vote, and the House by a 399-19 vote.

It’s important to support Ukraine, but not if the plan is to eventually give the Russians or their puppets control of the entire country.

The liberal betrayal is acute when it comes to Obama personally. In 2008, then-Senator Barack Obama co-sponsored (with then-Senator Hillary Clinton) a resolution urging Ukraine and Georgia admission to NATO. It unanimously passed the Senate. It was also co-sponsored by then-chairman of the Senate Foreign Relations Committee Joseph R. Biden, Jr.

Curiously, Joe Biden’s son Hunter Biden has now been added to the board of Ukraine’s largest private gas producer, Burisma Holdings, as if this will help the country stave off Russian subversion and infiltration, or perhaps buy some goodwill in Washington. It is desperation on Ukraine’s part and alienates conservatives who wanted the country to be free.

“For more than half a century, NATO has remained a vital asset in our nation’s efforts to support democracy and stability in Europe and to defend our interests and values throughout the world,” Senator Obama said in 2008. “I welcome the desire of Ukraine and Georgia to seek closer ties with NATO, and I hope that NATO responds favorably to their requests, consistent with its criteria for membership. Whether Ukraine and Georgia ultimately join NATO will be a decision for the members of the Alliance and the citizens of those countries, after a period of open and democratic debate. But they should receive our help and encouragement as they continue to develop ties to Atlantic and European institutions.”

But now that Russia has seized parts of Ukraine, Obama has taken Ukraine’s NATO membership off the table, despite what the people in that country may decide in their own free elections. Obama’s true colors are showing, too. He never wanted Ukraine to be truly free and had no desire to confront Russia.

The Hunter Biden move suggests the Democrats are trying to exploit the worsening situation, in order to make some money before the Russians and their allies take over the whole country. The next step will be for Ukraine to hire K Street lobbying firms to make the most of the surrender and save some scraps for their own benefit.

In this context, the Russian front groups are moving forward with propaganda campaigns and even street protests, such as at the NATO summit on September 4-5in Wales. “NATO is the military alliance binding Europe to US foreign policy, a foreign policy post-Iraq increasingly unpopular around the world,” says the Stop the War Coalition. “It is also the military alliance currently occupying Afghanistan.”

As Ukraine fights for its life as an independent nation, NATO leaders will be meeting at the luxurious Celtic Manor Resort—a golf, spa and leisure hotel—to decide the next step to take in appeasing Putin.

Joe Iosbaker of the United National Antiwar Committee is also leading the charge against NATO, appearing on the Iranian-funded Press TV to argue that “In truth, the war moves by the U.S. and NATO in Eastern Europe, and the Black Sea, and the Baltic Sea, are bringing about a new Cold War.”

Iosbaker is an interesting character. The homes and offices of he and his wife Stephanie Weiner were raided because of suspicions that they were providing support to foreign terrorist organizations. Both of them have been associated with the Marxist-Leninist Freedom Road Socialist Organization (FRSO) and the Chicago New Party that included Barack Obama.

Which country is Putin’s next target? Writing in the British Spectator, Alex Massie says, “Putin’s behavior demonstrates that, if anything, the problem with NATO expansion is that perhaps it did not go far enough. What price the independence of Estonia, Latvia and Lithuania if they were not now members of the western alliance? Even now their liberty is not guaranteed. It is not hard to see how Russian agitators could spark a contrived crisis in the Baltic states; not hard either to see how Putin might attack them again.”

Putin’s grand strategy, writes analyst Pawel Styrna, includes “rebuilding the empire.” As part of that, he says Putin’s goal is to reduce the influence of “Euro-Atlanticist” powers, i.e., the United States, Great Britain, and their allies. A “Eurasian empire,” centered around its Russian core, is the “engine” driving this “international anti-American coalition.”

In the face of the weak response to Russian aggression, can the destruction of NATO, a long-time Soviet goal, be far behind? If so, why should U.S. taxpayers finance Ukraine’s destruction with bailouts of a regime that will inevitably be transformed into a pawn of Putin’s geopolitical designs and future aggression?

This article was originally posted at the Accuracy in Media blog.