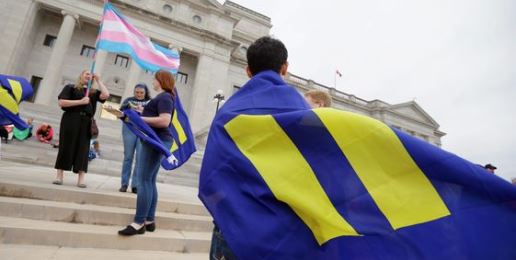 Only six of 54 Republican members of the U.S. Senate signed a pro-traditional marriage legal brief to the U.S. Supreme Court that was submitted on Friday. USA Today noted, “By contrast, 44 Democratic senators and 167 Democratic House members filed a brief last month urging the court to approve same-sex marriage. The brief included the full House and Senate [Democratic] leadership teams.”

These developments strongly suggest that while the homosexual movement remains solidly in control of the Democratic Party, the tactics of harassment and intimidation that we saw wielded against the religious freedom bill in Indiana last week are taking their toll on the Republican Party as a whole.

In the Indiana case, a conservative Republican governor, Mike Pence, abandoned the fight for religious freedom in the face of homosexual and corporate pressure.

It appears that more and more elite or establishment Republicans are simply deciding to give up on the fight for traditional values and marriage.

While this may seem politically expedient, this dramatic move to the left by the GOP could result in millions of pro-family conservatives deciding to abandon the Republican Party in 2016, a critical election year.

USA Today also noted that “…while some members of the 2012 Republican National Convention platform committee filed a brief against gay marriage Friday, it notably did not include GOP Chairman Reince Priebus.”

Fifty-one members of the House of Representatives signed the brief. But U.S. House Speaker John Boehner’s (R-OH) name was not on it.

Taking the lead for traditional marriage in the House was U.S. Representative Tim Huelskamp (R-KS), who not only signed the pro-marriage brief but has also introduced U.S. House Joint Resolution 32, the Marriage Protection Amendment, to amend the United States Constitution to protect marriage, family and children by defining marriage as the union between one man and one woman. The resolution has 33 co-sponsors and has been referred for action to the U.S. House Committee on the Judiciary.

In reintroducing the federal marriage amendment, Huelskamp said, “In June 2013 the Supreme Court struck down section 3 of the federal Defense of Marriage Act (DOMA), which had defined marriage for federal purposes as the union of one man and one woman, but upheld the right and responsibility of states to define marriage. Since then, though, numerous unelected lower court judges have construed the U.S. Constitution as suddenly demanding recognition of same sex ‘marriages,’ and they struck down state Marriage Amendments—including the Kansas Marriage Amendment—approved by tens of millions of voters and their elected representatives.”

However, on April 28 the U.S. Supreme Court will review the 6th Circuit Court of Appeals ruling, which upholds marriage laws in Michigan, Kentucky, Ohio and Tennessee. A ruling is expected in June.

USA Today noted that scores of prominent Republicans last month joined a brief on the homosexual side filed by former Republican National Committee Chairman Ken Mehlman, a former lieutenant to Karl Rove who came out of the closet and announced in August of 2010 that he was a homosexual. He has since launched a “Project Right Side” to make the “conservative” case for gay marriage.

Big money Republican donors such as Paul Singer, David Koch, and Peter Thiel have either endorsed homosexual rights and same-sex marriage or funded the homosexual movement. Thiel is an open homosexual.

A libertarian group funded by the Koch brothers, the Cato Institute has been in the gay rights camp for many years and its chairman, Robert A. Levy, wrote a “moral and constitutional case for a right to gay marriage.”

The signers of this brief at the U.S. Supreme Court in support of same-sex marriage were described as “300 veteran Republican lawmakers, operatives and consultants.” Some two dozen or so had worked for Mitt Romney for president.

One of the signatories, Mason Fink, who was the finance director of the Mitt Romney for president campaign, has signed on with a super PAC promoting former Florida Republican governor Jeb Bush for president. In another move signaling his alignment with the homosexual movement, Bush has reportedly picked Tim Miller, “one of the most prominent gay Republicans in Washington politics,” as his communications director.

A far-left media outlet known as Buzzfeed has described Bush as “2016’s Gay-Friendly Republican,” and says he has “stocked his inner circle with advisers who are vocal proponents of gay rights.”

But some conservative Christians are fighting back against the homosexual movement.

A brief to the court filed by Liberty Counsel notes that, in the past, the U.S. Supreme Court has upheld marriage as “a foundational social institution that is necessarily defined as the union of one man and one woman.” It cites the case of Skinner v. Oklahoma, in which marriage was declared to be “fundamental to the very existence and survival of the race,” and Maynard v. Hill, in which marriage was declared “the foundation of the family and of society, without which there would be neither civilization nor progress.”

Liberty Counsel said the court is being asked to affirm a false notion of marriage based upon fraudulent data about homosexual activity in society. It said, “For the past 67 years, scholars, lawyers and judges have undertaken fundamental societal transformation by embracing Alfred Kinsey’s statistically and scientifically fraudulent ‘data’ derived from serial child rapists, sex offenders, prisoners, prostitutes, pedophiles and pederasts. Now these same change agents, still covering up the fraudulent nature of the Kinsey ‘data,’ want this Court to utilize it to demolish the cornerstone of society, natural marriage.”

The homosexual movement has long maintained that Kinsey validated changes in sexual behavior that were already taking place in society. In fact, however, the evidence uncovered by Dr. Judith Reisman shows that Kinsey deliberately exaggerated those changes in a fraudulent manner by using data from pedophiles and prisoners.

Commenting on the impact of the acceptance of the fraudulent Kinsey data, Accuracy in Media founder Reed Irvine noted, “Gradually over the years, acceptance of the Kinsey morality has grown to the point where premarital and extramarital sex raise no eyebrows, where, in some communities, out-of-wedlock births are in the majority, homosexuality is glorified and aggressively promoted in our schools and the last taboo—adults having sex with young children—is now under attack in some of our institutions of higher learning.”

The Mattachine Society, a gay rights organization started by communist Harry Hay in 1950, cited the flawed Kinsey data in an effort to convince the public that homosexual behavior was widespread in American society.

The book, Take Back! The Gay Person’s Guide to Media Action, said the Kinsey Report on male sexuality “paved the way for the first truly positive discussion of homosexuality in the mainstream media.”

Today, this same Kinsey data is being used to convince the Supreme Court to approve homosexual “marriage” as a constitutional right.