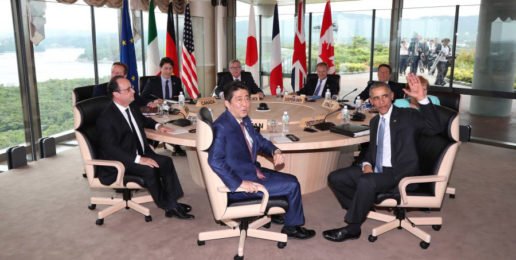 President Trump Should Keep His Promise and Pull Out of Paris Climate Agreement
05.27.17
PRINT

President Donald Trump attends his first G7 Summit May 26–27. There he will face enormous pressure to break a promise to those who elected him.

The promise? To get the United States out of the Paris climate treaty.

The pressure? It will come from the head of pretty much every other G7 member. Canadian socialist Prime Minister Justin Trudeau, French President Emmanuel Macron, and German Chancellor Angela Merkel will lead. Others will follow.

Even United Kingdom Prime Minister Theresa May might, despite Brexit, push Trump to “stay in Paris.”

Their reason? It can’t be because they’re convinced Paris is a good deal.

Trillions for Virtually Nothing

Full implementation will cost the world about $1 trillion a year from 2030 to 2100. And that’s an optimistic estimate. If politicians muck things up — and when do they not? — the cost could double.

For that, there’d better be a whopping temperature reduction. But by now these leaders must know there won’t be.

Why? Because the cat’s out of the bag.

But there’s another reason. Even if the models are right, fully implementing Paris would achieve only 0.3ºF of cooling by 2100. That’s about 23.3 to 46.6 trillion dollars per tenth of a degree of cooling.

And if CO2’s warming effect is only one-half to one-third what the models predict? Then the cost will be two to three times that much per tenth of a degree of cooling.

Cutting America Down to Size

So why will G7 leaders pressure Trump to “stay in Paris”?

That’s despite the fact that, because of our revolution in natural gas production, we’ve already reduced CO2 emissions far more than the smug EU.

(By the way, don’t feel bad about our CO2 emissions. CO2 is non-toxic at twenty times the natural concentration, so it’s no “pollutant.” Plants grow better with more of it. Adding CO2 to the atmosphere greens the planet. That means more food for everything that eats plants, or eats what eats plants. And that benefits the poor most of all.)

So what drives EU leaders? The same thing that’s driven them for decades. They envy and resent American freedom and prosperity. (They forget that our nuclear umbrella protected them from Russian aggression for fifty years.) They see Paris as a way to cut us down to size. Not to mention that many see it as the path to global government and global wealth redistribution.

So if President Trump is to keep candidate Trump’s promise, he needs to hear from the American people. He answers to us, not G7 leaders.

The American people need to tell him, loudly and clearly, that $23.3 to $46.6 trillion, let alone two or three times that much, per tenth of a degree of cooling is a price we won’t pay.

We need to tell him we don’t want candidate Barack Obama’s promise that if elected electricity prices would “necessarily skyrocket” fulfilled on Trump’s watch.

We need to make it clear that forcing low-income Americans, many elderly, to choose between having enough food and keeping warm in winter is wrong.

And we need to insist that American consumers and producers not be sacrificed to the pipe dreams of Green Eurocrats.