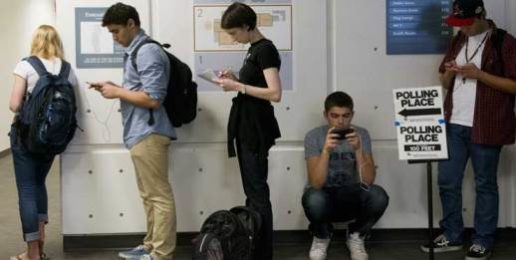 Millennials Not All that Concerned about Climate Change
Written By Tamara Cochran Louris   |   06.15.16
PRINT

Mainstream Media are master stagers, adept at slick productions edited to create the cultural scene, the public perception of their desiring.

In the world of stratospheric real estate, stagers move in furnishings and artwork, paint, light candles, bake bread or cookies — everything possible to touch the emotions of potential buyers and elicit a sale.

In the world of what poses as journalism, the authors and pundits selectively edit and present the news through the Leftist lens, such that Americans at large consume not facts, but ideologies.

If you had to ask John Doe on the street, “What issues are most important to Millennials?” their answers based on CNN, MSNBC, ABC, NBC, etc., would most likely be climate change, “choice,” LGBT and marriage equality issues, and marijuana legalization. Alas, John D. would be wrong.

Oh, Obama and his cohorts keep lambasting us with the “Climate Change is the biggest threat to mankind!” rhetoric.

25 They exchanged the truth about God for a lie, and worshiped and served created things rather than the Creator—who is forever praised. Amen.

The President is unable to utter the words “radical Islamic terrorism” in the same sentence and in that order. And yet, our POTUS recites ad nauseam the LGBTQ mantra of Pride! Does Pres. Obama realize his words confirm more verses in Romans 1?

24 Therefore God gave them over in the sinful desires of their hearts to sexual impurity for the degrading of their bodies with one another. 25 They exchanged the truth about God for a lie, and worshiped and served created things rather than the Creator—who is forever praised. Amen.

26 Because of this, God gave them over to shameful lusts. Even their women exchanged natural sexual relations for unnatural ones. 27 In the same way the men also abandoned natural relations with women and were inflamed with lust for one another. Men committed shameful acts with other men, and received in themselves the due penalty for their error.

28 Furthermore, just as they did not think it worthwhile to retain the knowledge of God, so God gave them over to a depraved mind, so that they do what ought not to be done.

29 They have become filled with every kind of wickedness, evil, greed and depravity. They are full of envy, murder, strife, deceit and malice. They are gossips, 30 slanderers, God-haters, insolent, arrogant and boastful; they invent ways of doing evil; they disobey their parents; 31 they have no understanding, no fidelity, no love, no mercy.

President Obama proclaims “Islam is a religion of peace!” and the Islamic call to prayer is “one of the prettiest sounds on Earth at sunset.”

The Left’s secular, Socialist indoctrination of America and her youth marches on, driven by education elites and the media.

And yet, despite this ever present Climate and Sexual Perversion Propaganda, millennials march to a slightly different beat.

Look closely at the chart below which lists the “most important issues for the next President of the United States to prioritize”:

Those results are slightly heartening and would be more so were it not for MSM’s wholesale silence on the survey. All we hear in the ethernet and on broadcast news are the proverbial crickets of verboten knowledge.

What this report and these results mean is there is hope!

With all of The Left’s high-powered marketing, glitzy Hollywood production, and monopoly of the broadcast news and education establishment, they still have not completely eradicated independent thought and values. Millennials do not quite yet walk in Progressive lockstep.

Conservatives and Christians, for the most part, are about 100 years late to the culture war Progressives (née Socialists/Marxists) have been waging via every possible societal gatekeeper.

Time to wake up. Time for each and every Conservative, every Bible-believing Christian to make haste and dive headlong into the fray. There are hearts and souls, and ultimately the future of our beloved nation in the balance.

We must use our time and our money to reach those whose hearts have not yet hardened to the truth of Psalm 32:12 Blessed is the nation whose God is the Lord.

Conservatism is no fad, no flash in the pan. It is a time-tested worldview tempered by biblical principles, principles which, when acted upon result in life and abundant life for individuals, families, and nations.

Mainstream Media has staged its Progressive Production; time for Conservatives to shatter that evil facade and deliver the truth that could rescue not only Millennials, but all of America.