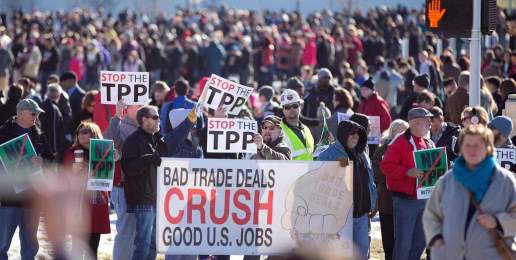 Both as a candidate, and now as president, Donald Trump knows how to intensify attention on a topic. Since he launched his presidential campaign two years ago, manufacturing jobs and fair trade have been the focus of a massive debate on the political right.

Is this a topic for the Illinois Family Institute? Here are a few excerpts from an article by John Horvat II titled “Work without Men” that suggests it might well be. He writes that negotiating new trade arrangements, and lowering tax and regulatory burdens are all critical to bringing back jobs.

Such measures will indeed create jobs and open up opportunities, but they alone will not make America great.

America faces a grave moral crisis that needs to be addressed. As Charles Murray and so many other scholars have stressed, America is coming apart. A vast underclass has developed that is the result of broken families, shattered communities, a nonexistent work ethic, substance abuse, and godless education. The mantra of “bringing jobs back” is not going to reverse the downward path of a nation without finding ways to rebuild a strong moral foundation.

So much for the claim that economic issues are separate from moral issues.

“Americans have changed over the decades,” Horvat writes, and many “no longer have stable families.”

Here’s a shocking stat from the Manufacturing Institute I’d never seen before:

[N]early two million U.S. manufacturing jobs will remain vacant over the next decade if current trends continue. The crisis is aggravated by growing numbers of retiring baby boomers while the younger generations are not stepping up to the plate.

The reason for the lack of workers is a great talent gap between what is needed and what is available.

Thus, the problem is not a lack of jobs but a lack of skilled workers. In fact, one labor study found that the average U.S. manufacturer is losing as much as 11 percent of its annual earnings due to a talent shortage. Another survey concluded that almost half of executives would consider reshoring manufacturing operations back to U.S. yet are also concerned about the need for skilled workers.

The root of these economic problems is a moral problem.

“There are indeed many Americans who are out of the workforce to the point that they are not even looking for employment,” Horvat writes, and refers to Nicholas Eberstadt’s “masterful study,” America’s Invisible Crisis: Men Without Work:

The book documents a disturbing fact that “an invisible army” of ten million idle American men of prime working age, some ten percent of the male workforce, now “spend absolutely no time at a job.” Most don’t want to change their nonemployed status.

Horvat outlines how many of these men prefer to live — and it is not a pretty picture (you can read it here).

“[T]hat is why the focus must be expanded from just the jobs and infrastructure projects that are now all the rage. Unless the new administration concentrates on invigorating the moral fiber of the country, strengthening marriage and the family and limiting the power of the state, America will not recover from its present woes.

With Rust Belt states like Pennsylvania and Michigan voting for Trump because of his “bringing back jobs” promise, Horvat’s close might be a little overstated:

Indeed, when the jobs come back, there is the risk that no one will show up.

The “invigorating the moral fiber of the country, strengthening marriage and the family and limiting the power of the state,” reads a lot like the mission of the Illinois Family Institute and Illinois Family Action.

A few weeks ago, IFI executive director David Smith and I had the pleasure of visiting with John Westberg, a man who helped build the manufacturing powerhouse AutoMeter in Sycamore, Illinois, about sixty miles west of Chicago.

In the meeting, Westberg was vocal about the fact that the moral foundation of the country is the number one challenge facing us all. But he also has an idea of what to do about the problem of jobs being “shipped out of the country.”

John Westberg’s opinions and ideas deserve attention, since he led his family’s business from 25 to 625 employees, filling 3 plants in 2 states. AutoMeter received national honor by being voted “Manufacturer of the Year” in the automotive high-performance aftermarket. “This honor occurred not once but 4 times.”

After he retired and sold the company, Westberg started the New Hope for America foundation (NHFA), and its website has a plethora of materials supporting his proposed solution.

More on that next time.