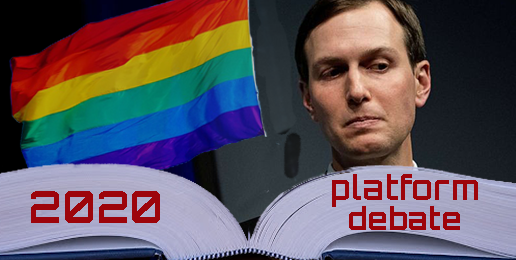 In an alarming May 24, 2020 article titled “Scoop: Inside the Secret Talks to Overhaul the GOP Platform,” published by Axios, political reporter Jonathan Swan exposed the behind-the-scenes efforts of the socially liberal son-in-law of President Trump, Jared Kushner, to change the GOP platform so that it reflects Democrat views. While the radical overhaul of the GOP platform—and, therefore, the GOP—is the brainless-child of Kushner, the nitty gritty of the subversive project has been assigned to Bill Stepien, second in command for Trump’s re-election campaign, just under Brad Parscale.

According to Swan, Kushner has been working on this secret “radical overhaul” of the GOP platform with Trump’s campaign officials for the past six months. This radical overhaul includes reducing the size of the platform from 58 pages to 1 page, a perhaps Herculean task but otherwise untroubling. Who doesn’t like brevity?

No, it’s not Kushner’s desire to reduce the platform’s size that should concern conservatives. It’s what he seeks to eliminate that should raise the antennae and hackles of conservatives. I bet those with culturally sensitive antennae have already guessed what socially “progressive” Kushner wants to jettison.

But before we get to that, let’s take a moment to reflect on another subversive project of Kushner’s: criminal justice reform. Daniel Horowitz more accurately refers to it as “federal jailbreak legislation,” and he places Kushner at the center of the effort to set criminals loose in our communities. Remember Kushner’s role in this as you watch thugs loot and burn down American cities.

Swan reports that in a December 2019 meeting, Kushner told his band of revolutionaries—that is, both “senior White House and campaign staff”—that  “more of their policies should be drawing people to the party, so they ought to eliminate alienating language.” So far, so good. The GOP should aim for non-alienating language in its platform.

As an example of language that would alienate voters, Kushner said that he didn’t want to see anything about “gay conversion therapy” in the 2020 Republican platform. The 2016 Republican platform did not explicitly mention gay conversion therapy, but it included this line: “We support the right of parents to determine the proper medical treatment and therapy for their minor children.” Gay Republicans were furious because they viewed it, accurately, as a coded endorsement for the widely condemned practice that’s rejected by major medical associations and whose use on minors is banned in many states and some other countries.

Can’t have any “language” that infuriates “gay Republicans” now, can we. According to Kushner, their fury dictates Republican policy.

Space does not permit a discussion here of what is either ignorantly or deceitfully identified as “gay conversion therapy” in order to ban all forms of counseling to help those who experience unchosen, unwanted homoerotic attraction. That will have to wait for another day.

What’s most important to note is that Kushner wants to eliminate language that supports the right of parents to decide what kind of therapy or treatment their same-sex attracted or gender-dysphoric children receive. This should trouble every parent who believes they—not the state or leftist-controlled medical and mental health organizations that have abandoned both common sense and science—know what’s best for their own children.

You know what else alienates and infuriates homosexual RINOs? This language in the GOP platform really chaps their hide:

Traditional marriage and family, based on marriage between one man and one woman, is the foundation for a free society and has for millennia been entrusted with rearing children and instilling cultural values. We condemn the Supreme Court’s ruling in United States v. Windsor, which wrongly removed the ability of Congress to define marriage policy in federal law. We also condemn the Supreme Court’s lawless ruling in Obergefell v. Hodges, which in the words of the late Justice Antonin Scalia, was a ‘judicial Putsch.’

You know what alienates Americans who cheer abortion? They’re alienated by this language from the GOP platform:

we assert the sanctity of human life and affirm that the unborn child has a fundamental right to life which cannot be infringed. … We oppose the use of public funds to perform or promote abortion or to fund organizations, like Planned Parenthood, so long as they provide or refer for elective abortions or sell fetal body parts rather than provide healthcare.

You know what alienates those who believe the U.S. Constitution is an infinitely flexible document with no fixed meaning or who think it’s hopelessly outdated? This language in the GOP Platform alienates them:

the Constitution was written not as a flexible document, but as our enduring covenant.

You know what alienates those who support “progressive” judicial activism? This language in the GOP platform alienates them:

A critical threat to our country’s constitutional order is an activist judiciary that usurps powers properly reserved to the people through other branches of government. Only a Republican president will appoint judges who respect the rule of law expressed within the Constitution and Declaration of Independence, including the inalienable right to life and the laws of nature and nature’s God.

You know what alienates Americans who think the world is ending in 12 years? They’re alienated by this language in the GOP platform:

The Democratic Party’s campaign to smother the U.S. energy industry takes many forms, but the permitting process may be its most damaging weapon. … We support the development of all forms of energy that are marketable in a free economy without subsidies, including coal, oil, natural gas, nuclear power, and hydropower.

You know what alienates those who want universal healthcare? They’re alienated by this language in the GOP platform:

Any honest agenda for improving healthcare must start with repeal of the dishonestly named Affordable Care Act of 2010: Obamacare.

You know what alienates those who favor open borders? They’re alienated by this language in the GOP platform:

Illegal immigration endangers everyone, exploits the taxpayers, and insults all who aspire to enter America legally. We oppose any form of amnesty for those who, by breaking the law, have disadvantaged those who have obeyed it.

Take ACTION: Click HERE to contact the Republican National Committee to urge them to protect the 2016 GOP platform from liberal activists. There is no need to radically redevelop the GOP platform. Keeping the strong planks for the sanctity of human life, traditional marriage and family are nonnegotiable.