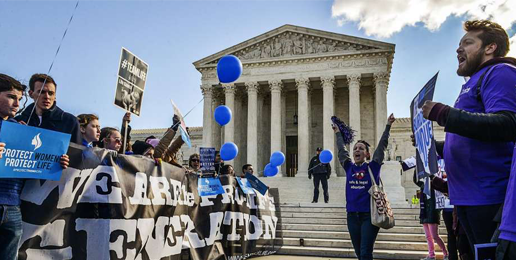 Many pro-family conservatives ask, “Isn’t there any good news to report?” Yes, there is. Some examples are the growing national economy, record low unemployment numbers for minorities, foreign policy changes from the G.W. Bush and Obama years, and, lately, even some positive decisions from the U.S. Supreme Court.

June is traditionally a big month for announcing decisions from the Supreme Court of the United States (SCOTUS), and this year is no exception. Below are a few of the cases decided and a few still pending.

It can take a lot of work to search out short case summaries put into non-legal language, but the New York Times and the SCOTUS Blog are useful resources. The SCOTUS Blog has a helpful page titled “Plain English / Cases Made Simple” — “This is our archive of posts in Plain English,” the page explains. In addition, each case page includes a list of links to analysis posted at their website.

For those interested in statistics, the SCOTUS Blog also has a page that includes sporting event-like stats for the current term on “dispositions by sitting, majority opinions authored by sitting, pace of grants, pace of decisions, the circuit scorecard and justice agreement.”

(The text beneath the bolded subject lines are from the New York Times, and the case names link to their SCOTUS Blog page.)

Several of the cases below were included in a Times article “The Supreme Court’s Biggest Decisions in 2018.” The article opened with this:

“The nation’s highest court, now at full strength with the appointment of Justice Neil M. Gorsuch last year, faces a far-reaching list of cases that renew its central role in American life.”

This first case, of course, has been well covered by the conservative press. It has also generated a debate on whether the ruling was too narrow or not. You can find arguments on both sides here, here and here.

The court ruled 7-2 in favor of a Colorado baker who refused to create a wedding cake for a gay couple. The court said the baker had been mistreated by a state civil rights commission based on remarks of one of its members indicating hostility to religion.

For more on the court’s action in these two cases, read “The Supremes put off deciding whether politics violates the Constitution” by the Heritage Foundation’s Hans A. von Spakovsky.

The court sent back the challenge to Wisconsin’s legislative map to the lower courts.

The court ruled in an unsigned opinion against Republican voters who had challenged the congressional map drawn by Democratic lawmakers in Maryland.

In the next case, involving voting rights, the above-linked Times article examines an Ohio program that removed “voters from its list of registered voters if they don’t respond to a notification after four years… Critics said federal law prevents states from removing people from voter registration rolls for not voting.

The next case was obviously not viewed as positive by many social conservatives:

The court struck down a federal law that effectively banned commercial sports betting in most states, clearing the way for legal wagering.

SCOTUS Blog noted that the holding of the next case, involving immigration, per federal law does “not give detained aliens the right to periodic bond hearings during the course of their detention”:

The court ruled that immigrants held in detention facilities have no rights under a federal law to periodic hearings to decide whether they may be released on bail.

Among the cases still pending is Arlene’s Flowers Inc. v. Washington — here is the summary from the SCOTUS Blog page:

Here are a few other cases where the decisions have not yet been announced:

The court will decide whether President Trump had the legal authority to restrict travel from several mostly Muslim countries.

The court will decide whether the government needs a warrant to obtain information from cellphone companies showing their customers’ locations.

The court will decide whether states may require government workers who choose not to join unions to pay fees for collective bargaining.

The court will decide whether California may require “crisis pregnancy centers” to provide information about abortion.

The court will decide whether states can require internet retailers to collect sales taxes in states where they have no physical presence.

If what you’ve read so far doesn’t strike you as all that positive, you can be happy you don’t live in Canada. Dr. Michael Brown details what their high court did this week:

Canada’s Supreme Court Rules Against Trinity Western and the Bible

In a ruling that is sure to send shock waves through the nation, Canada’s Supreme Court ruled 7-2 against Trinity Western University’s (TWU) Law School. In effect, what the court declared is that universities must choose between biblical standards and accreditation. Put another way, the court ruled that Christianity and higher education are incompatible. I am not exaggerating in the least.

Here’s a brief summary of the case for those who are not familiar with it. Trinity Western is a Christian university that requires its students and faculty to live by basic Christian standards. This means that to be a student or faculty member in good standing, you can’t commit fornication or adultery, nor can you engage in homosexual relationships . . .

But I can say this to my friends and colleagues and fellow-educators and communicators here in America: We either use our liberties or lose them. We either stand fast and stand tall and stand strong, or we cower in a corner. We either do what’s right today, or we apologize to our children tomorrow.

It’s time to push back.