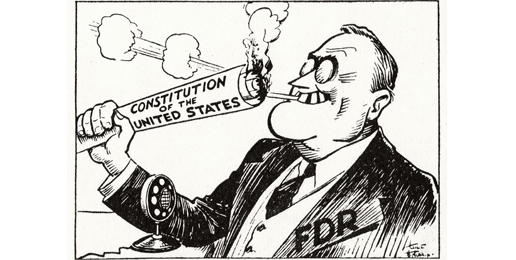 Written by John A. Sparks

The idea of expanding the size of the U.S. Supreme Court, also known as “court packing,” has surfaced once again, as it did after the Brett Kavanaugh appointment. Often mentioned is a proposal by Erwin Chemerinsky, dean of University of California Berkeley’s Law School. He favors increasing the size of the court to 13 instead of its current nine. There are other calls for a larger court, such as those produced by organizations like “Take Back the Court” and “Demand Justice.” Of course, U.S. Representative Alexandria Ocasio-Cortez (D-NY) simply demands: “Expand the court.”

Let’s start with the basics. The U.S. Constitution does not state a particular size for the U.S. Supreme Court. The number of justices are fixed by Congress. The initial size was set by the Judiciary Act of 1789, which was passed by both houses and signed into law by President George Washington. That act called for one chief justice and five associate justices—a total of six. The number has been changed a few times, but a later Judiciary Act (1869) set the total number at nine, where it has remained for over 150 years. Although there are other proposals circulating—rotating justices off the court and onto the U.S. Courts of Appeals and requiring mandatory retirement at a certain age—a change in the number of justices would be the only change which would clearly not require a constitutional amendment.

So, why change the size of the court? Is it really necessary?

One reason given by advocates of expansion is that the current configuration of nine justices does not give duly elected presidents sufficient opportunities to shape the court by their appointments. In theory, since a newly elected president can’t “clear the deck” and name an all new court, the president must wait for court retirements or deaths to occur. Until that happens, the president is unable to make a court appointment. In the case of President Trump, he had the rare occurrence of two deaths and a retirement during his first term.

However, such opportunities are not far from the norm. Remarkably, the facts show that with the exception of partial-term presidents (William Henry Harrison, Zachary Taylor, Andrew Johnson), virtually every U.S. president, beginning with George Washington and ending with Donald Trump, has been able to appoint at least one U.S. Supreme Court justice during his term of office, with Jimmy Carter being the only exception. In fact, the average number of appointments by each of our 45 presidents is approximately 2.6 appointments. Two-term presidents appoint on average 3.1 justices, if one excludes Franklin Roosevelt (8) and George Washington (11), who are “statistical outliers.”

Coming forward to the post WWII era, the 13 elected presidents—six Democrats and seven Republicans—have maintained an average similar to the historical average. Here are the number of appointments for each: Truman (4), Eisenhower (5), Kennedy (2), Johnson (2), Nixon (4), Ford (1), Carter (0), Reagan (3), George H.W. Bush (2), Clinton (2), George W. Bush (2), Obama (2), and Trump (3). The mean average per president for this period is 2.3 appointments. The statistics on appointments by sitting presidents seem to show that on average presidents have not been curtailed by the nine-justice configuration.

Another argument made years ago is now resurfacing. It challenges the fundamental structure of American government. These supporters of change say that our current constitutional system of presidential nomination and senatorial confirmation is outmoded because it is anti-democratic, that it is not responsive enough to “the people.” They say the existing judicial processes of choosing justices are  “relics” from a political “ice age” that was “pre-democratic.”

True, the court and the way its members are chosen and serve is not democratic, if by that one means that “the people” choose the justices directly and can regularly remove them. The fundamental configuration of American government put in place by the Founders is what Aristotle called “mixed government,” that is a mixture of democratic and non-democratic forms. Members of the U.S. Supreme Court are chosen by the president, not elected by the people. The confirmation of the nominee is done by the U.S. Senate, where population does not determine political power because each state has the same number of votes. The term of service for a justice (and other federal judges) is for life. These are the only federal office holders with life-long tenure. Therefore, the justices are not reachable by “the people” in the same way that, for instance, a member of the U.S. House of Representatives is. The reason? The Founders wanted the judicial branch to be able to resist the fitful pressures of majorities and of the executive which would endanger the cardinal rights of citizens—life, liberty, property, religious expression, and speech.

However, this is not to say that the people have no voice in the shape the court takes. But that voice is a muted, indirect voice. It is expressed by choosing a president who then, through the rigorous filter of the U.S. Senate, appoints a justice upon a vacancy. The voice of the people, though restrained by the existing system with nine justices, has produced courts of differing political hues. One only must only compare the New Deal court with the Rehnquist court or the Warren court with the current Roberts court. However, those changes in emphasis and judicial philosophy come gradually, helping to guarantee a substantial degree of certainty and predictability which should be the hallmark of a court, the chief interpretative body in our constitutional republic.

What the proponents of expansion actually fear is candidly expressed by Chemerinsky. Expansion of the court “is the only way to keep there from being a very conservative court for the next 10-20 years.” Chemerinsky’s statement reveals that he is not really dissatisfied with the current size, structure, and process of judicial nomination. What he is unhappy about is that certain Republican presidential wins coupled with deaths and retirements by justices have produced a court with a conservative tilt. He fears a “long winter” of conservative opinions by the court and is unwilling to trust that future Democrat presidential wins, deaths, and retirements could just as well turn the court back in the liberal direction he desires while keeping the current process and size of the court.

Despite current polls which indicate that court packing would be viewed unfavorably by the electorate, the temptation to pack the court would be significant with a Democrat presidential win. Assuming an expansion of the court to 13 justices, the four new members of the court would presumably be liberal judges inclining the court in that direction. Regrettably, such an abrupt change in the size of the court based on a single presidential victory would diminish and eventually destroy respect for and confidence in the court. It would result in long-term damage to the court, which would be converted from a generally impartial deliberative body following the rule of law into a branch whose size could be altered in favor of either victorious political party in any given election.

Court packing is unnecessary and potentially destructive of the court’s dignity and high standing. It would undermine the delicate balance between the branches that the Founders labored to ensure.

This article was originally published by The Institute for Faith & Freedom.

Propaganda Network CNN Gets Upset About Propaganda
b
a
x
r